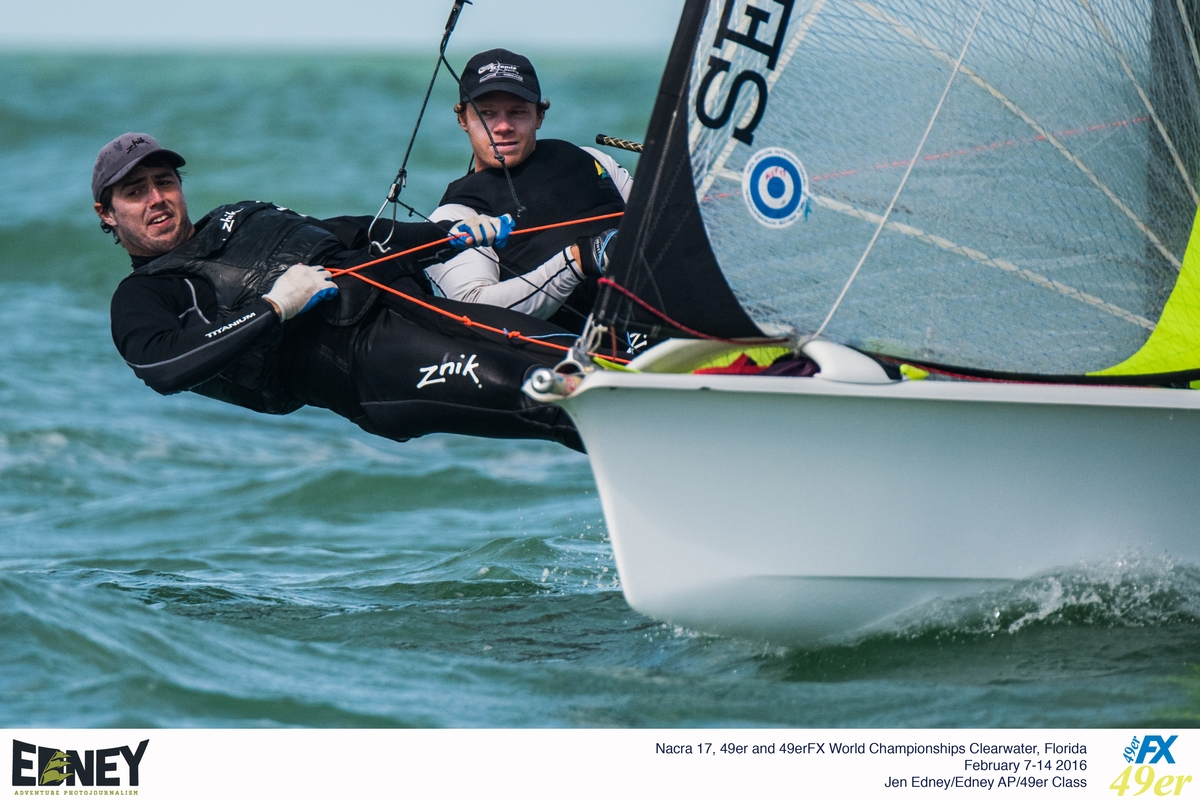 Olympic gold medallists Nathan Outteridge (NSW) and Iain Jensen (NSW) as well as Nacra 17 World #1 Jason Waterhouse and Lisa Darmanin are spearheading the Australian contingent at the 2016 Nacra 17, 49er, and 49erFX World Championships in Clearwater, Florida with both crews in second place after day four of the event (Friday, 12 February 2016 EST) and with two days to go.

In the women’s 49erFX fleets the battle is tight between the three Australian Sailing crews who all progress to the top-21 Gold Fleet racing with Tess Lloyd (VIC) and Caitlin Elks (WA) ranked 16th, Olivia Price (NSW) and Eliza Solly (VIC) in 18th and Haylee Outteridge (NSW) and Nina Curtis (NSW) following in 19th.

In the Nacra 17 four races were completed on Friday with an up and down day for Jason Waterhouse (NSW) and Lisa Darmanin (NSW) winning two and adding a tenth and 20th. The result sees the pair move from third into second, after also the Jury corrected a scoring error from Wednesday.

“We had great day with new conditions here in Clearwater. It was another tricky day with four races. In the first race we had a shocking start and climbed our way back to tenth. The next two we sailed really well to get two bullets and in the final race everything just went a little wrong.

It was unfortunate to finish on a bad note but we are still learning heaps about ourselves as a team and still putting some solid results on the score board. Sometimes you nail everything and some times you make mistakes, we just don't like making mistakes twice. There will be three more races tomorrow so we will push hard for a good place going into medal race Sunday.”

The Nacra 17 has completed 12 races thus far and has one day of fleet racing left with three races scheduled for Saturday, 13 February, before Sunday’s Medal Race.

In the 49er and 49erFX fleets, Friday, 12 February was the last day of qualifying with the fleets now splitting into Gold and Silver fleet.

Four races were completed in the 49er and Nathan Outteridge and Iain Jensen finished the day on a high and with a race win after a 7-18-6 in the first three races.

Australian Sailing Squad’s David Gilmour (WA) and Lewis Brake (QLD) had the strongest comeback of the day when the pair put in a convincing 1-4-4-13 series, which saw them jump from 49th into 17th and thus into Gold Fleet.

Three races were completed in the 49erFX fleet with all Australian Sailing crews securing a spot in the Gold Fleet.

Australian Sailing Squad’s Tess Lloyd (VIC) and Caitlin Elks (WA) are heading into the final series as the top ranked Australian crew in 16th after posting a 13-11-3 series today.

“We had awesome skiff conditions today and finally some warm sunshine! Today was all about a good start with the speed to play the left hand side of the course.  The last race we were able link everything together and come way with a third.

Early days and very excited for racing tomorrow in the gold fleet when the racing really steps up!”

Race Schedule: Qualifying from the 9-12th of February. Silver and Gold fleet racing from the 13-14th with the Medal races on the 14th.