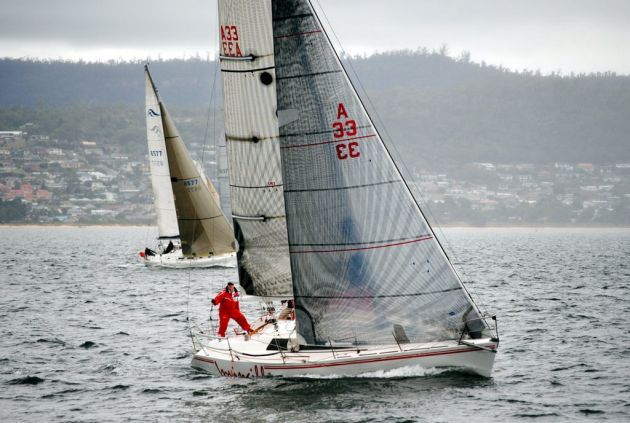 Invincible now heads the Pennant leader board in the Group A AMS and IRC divisions going into the seventh and final Combined Clubs Long Race on Saturday, February 27. In the PHS category, Invincible is just one point behind Matthew Denholm’s Cleopatra.

Invincible has a remarkable record of yacht racing on the Derwent and in southern Tasmanian waters, her successes on handicap having included the Bruny Island Race, the King of the Derwent and many Pennant series.

Aside from bushfire smoke shrouding southern Tasmania throughout the morning, the Long Race (35 nautical miles for Group A, shorter distances for Groups B and C) was sailed in ideal conditions – a spinnaker run down the river before a moderate northerly breeze and a spinnaker run home in a freshening seabreeze.

The spinnaker runs, in particular the dash back up-river, certainly favoured Invincible and her winning margins in the AMS and IRC divisions were by several minutes. However, in the PHS division the Farr 1104 won by just 18 seconds on corrected time form Ian Stewart’s Mumm 36 Tas Paints.