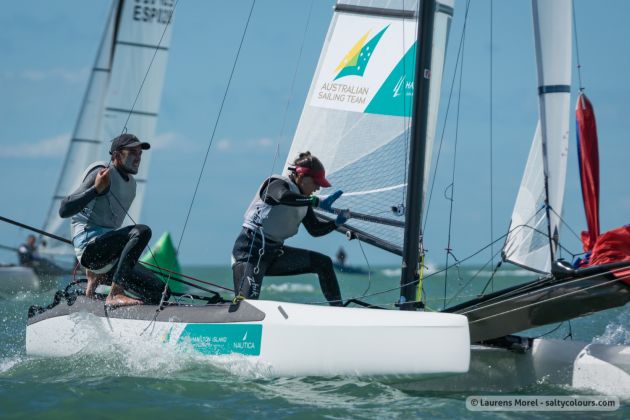 Waterhouse and Darmanin at the Nacra 17 Worlds. Photo Laurens Morel.

It was a character building and tough penultimate day at the 2016 Nacra 17, 49er, and 49erFX World Championships in Clearwater with the breeze picking up throughout the day and the changing sea state making for challenging conditions.

World #1 Olympic gold medallists Nathan Outteridge (NSW) and Iain Jensen (NSW) as well as Nacra 17 World #1 Jason Waterhouse (NSW) and Lisa Darmanin (NSW) both dropped down the ranks and will go into the final day ranked sixth and fifth respectively.

While Jason Waterhouse and Lisa Darmanin had a rather unlucky day, Nathan Outteridge was sailing with a pectoral injury limiting his strength and movements.

Three more races plus the top-ten Medal Race are scheduled in the 49er/FX fleets on Sunday, while the Nacra 17 will head straight into their Medal Race.

In the 49er and 49erFX it was the first day of Finals racing on Saturday with three more races scheduled for Sunday before the Medal Race in the afternoon.

Nathan Outteridge and Iain Jensen had a challenging day posting an average series of 13, 11, 14 to drop into overall sixth.  Nathan Outteridge sailed with a pectoral muscle injury, which will require further assessment before the last day’s racing.

“We had pretty nice sailing conditions, 14knots, touching 18 at times, but mostly between 14-16, big waves and it was flicking around a bit, which made it quite tricky out there. We were struggling for a little bit of pace and not really doing good boat handling. I have a bit of an injury to the right pec at the moment. I’m not really sure what caused it, but it was pretty sore after sailing yesterday,” Nathan Outteridge explained.

“Today’s conditions with those massive waves made life difficult. But we soldiered on. You can always get an injury, also at the Olympics, and you just have to deal with it. We pushed through and got some ok results, but obviously not really what we were looking for. We’ll check tonight, see how it looks and make our decisions after that. We’ll just have to be smart about this.”

Australian Sailing Squad’s David Gilmour (WA) and Lewis Brake (QLD) continued their strong run posting a consistent 6-6-7 series to move into 15th and keeping their hope alive to qualify for a spot in the top ten Medal Race.

Queenslanders Joel Turner (QLD) and Tom Siganto (QLD) as well as Harry Price (NSW) and Harry Morton (NSW) continued racing in the Silver fleet, which only got one race in.

The fifth and penultimate day of these World Championships saw World #1 Jason Waterhouse (NSW) and Lisa Darmanin (NSW) drop from second into fifth after one of their worst days and posting a 34-17-17 series in the three races of the day.

“It was obviously a really tough day for Lisa and I. We had big waves and breeze that built all day. We were fifth in the first race when we capsized, which dropped us to last. That became our drop so we are carrying a 22 from earlier in the week. In the second race we were sixth around the top mark and then had a penalty. We had a pretty bad overlay on my part, which dropped us back to mid-teens. And in the last race we hooked some weed, so it was one of those days, one of the worst days in sailing of this year. But we’ll just call it a character builder,” Jason Waterhouse said.

“Tomorrow we only have the top ten Medal Race and due to our results today we’ll just have to go out there, try to win the race and see how the cards fall on the deck”, Jason added about the task at hand.

After the 15-race series defending World Champions Billy Besson and Marie Riou from France have an unassailable lead going into the final day with the rest of the medals yet to be decided.

“We had a bit more breeze than yesterday and racing in Gold Fleet is at a much higher level and much tighter than the previous days. We managed to have a pretty consistent day, apart from the last race,” Tess Lloyd said.

“The first race was a bit of a speed race before it started to get shiftier and you could play the shifts and make some gains. All the points are quite close and we want to try and make it into the Medal Race.”

Also aiming for Medal Race are Olivia Price (NSW) and Eliza Solly (VIC), who won the first Gold Fleet race, followed by a 15th and 16th. They are ranked 16th going into the final day of racing with only three points separating them from Tess Lloyd and Caitlin Elks.

Haylee Outteridge (NSW) and Nina Curtis (NSW) sit a couple places further down the ranks in 20th after posting a 20-22-9 series.

Three races are scheduled for Sunday, 14 February 2016 morning local time for the 49er and 49er FX fleets which will be the last chance for crews to qualify for Sunday afternoon’s top-ten Medal Race.