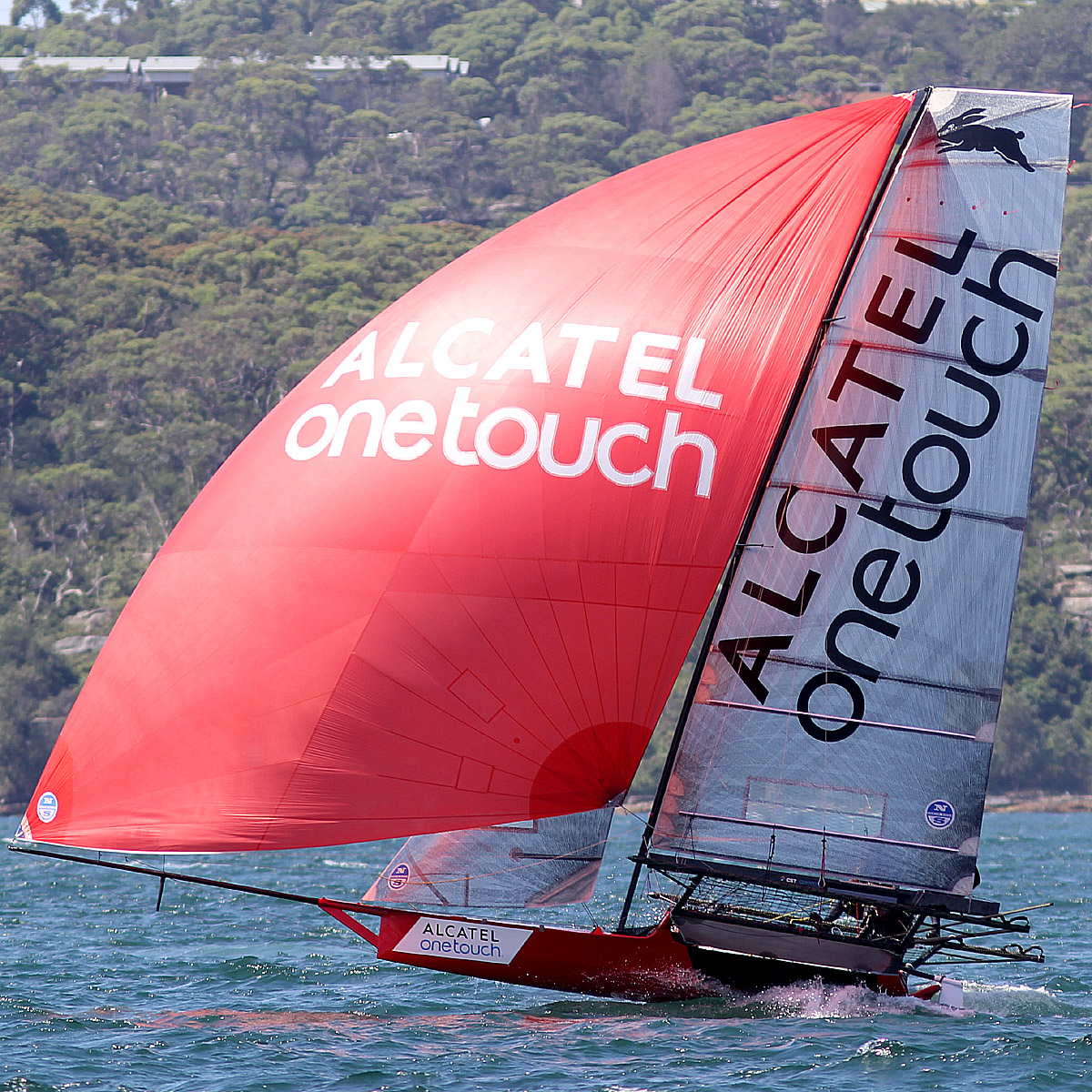 Alcatel One Touch sponsor the Rabbitohs and the 18s.

One of the most respected men in 18 Footer Racing is the 1996 JJ Giltinan 18ft Skiff champion Stephen Quigley, who will line up as skipper of Alcatel One Touch in the 2016 regatta, sponsored by appliancesonline.com.au, which starts on Sydney Harbour this Saturday.

Unlike his 1996 victory, which was achieved in the Patrick Corrigan sponsored AEI Pace Express, with an experienced crew of Craig Ferris and Chris Cleary, Steve’s crew this year are two 18 Footer rookies – his son Tom (18) in the bow and Sam Ellis (21) on the sheet.

When the starter’s flag drops for the start of Race 1 on Saturday and Alcatel One Touch charges off with the other 29 starters, it will be a significant milestone in a career of many highlights and achievements for Steve Quigley.

Steve began his sailing as a six-year-old in a Heron, with his father Geoff, on Burraneer Bay in Sydney’s south. He progressed through Manly Juniors, VJs and then onto 470s, but when he became a victim of the pre-Olympics selection debacle in 1992 decided to sail a 16 Footer for a year.

Steve recalls:  “I gladly accepted an invitation from Will Finlay and Lachlan Gilbert to start some ‘fun’ sailing 18s on a B-18 skiff ‘Peelgrane Marine’ in 1994.

“The following year Tony Reynolds, the then League Secretary, gave us an old Murray boat and we completed the season winning a few races along the way. Tony had enough confidence to give me a new boat which was sponsored by long time 18 Footer enthusiast Pat Corrigan and his AEI Pace Express company.

“I teamed up with Chris Cleary and Craig Ferris and in 1995-1996 Season had an amazing run, winning everything on offer–the Club, NSW, Australian and JJ Giltinan Championships. Ät the end of that Australian season, I teamed up with Peter Loudon and Craig Phillips and went to the Northern Hemisphere where we won the four event European Championship series, which was organised by Adam Wilson.”

Steve retired from the 18s in 1998 when balancing an expanding family, a new business and sailing 18s became too much to handle.

“My three kids Issy, Tom and Lara, have been sailing since an early age on the junior circuit in Manly Juniors and Flying 11s at Cronulla Sailing Club and in the schools teams racing events, representing Ascham and Scots College. For the past 15 years I have been coaching them and their cohorts with a long term view to eventually generally encouraging them and their friends to try 18s as the best boats on the planet to sail.

“We regularly took the Cronulla Sailing kids out on the ferry to watch the JJ and it’s started to pay dividends with Tom, Phil Marshall (Mojo Wine) and Ben Piggott, starting their 18 careers this year and a lot of the other kids buoyed by their success now showing interest.”

That’s Steve’s history.  Now, for Steve his focus is all about the boys.

“Our team was formed out of desire by a combination of the Club’s Board recognising the fact that we needed to encourage youth into the fleet, and my son Tom’s enthusiasm to have a crack at the 18s before his dad got too old. Tom has just started Year 212 at Scots College in Bellevue Hill and is about to do his first JJ as a bowman.  He started at 65kg and is now still only 68kg but is 6’1” and growing in stature every race.  I’m incredibly proud of him and his resilience so far as he has taken on every challenge with gusto and not once shirked his responsibility or said the spinnaker is too hard to hang onto.

“We met Sam Ellis at Scots College last year where he was one of Tom’s coaches.  Sam has a distinguished background in Flying 11s, 29ers and match racing, and was a good emotional and physical fit for our long term youth development plan. Sam is really the hope of the side at this stage of the development of our team and is an excellent sailor in his own right.  He could easily do any of the roles on the boat, and I’m hoping he will eventually steer the boat and the boys will find and train a young sheet hand or bowman to step into his current role.

“We are very lucky to have the support of Alcatel as our name sponsor and Gill, Ocean and Earth, and the Australian 18 Footers League, who ultimately own and fund the majority of the sailing. The club allocated us the old Asko Appliances (formerly a JJ winning Gotta Love It 7) hull, which is 7-8 years old, Woody’s big rig and The Rag’s little rig.  We’vs added a few new sails, courtesy of our sponsor, and the old ‘7’ spinnakers from the hand-me-down program.

“It’s a bit of a Lego boat with various parts coming from various corners of the boat park. We’ve worked hard on replacing all the fittings and we’ve reduced the sail areas significantly to match our modest 215kg crew weight (the top teams are sailing with 250+kg) so we have a low drag rig philosophy that seems to be showing competitive speed in some conditions.

“My main aspiration is to develop more youth into sailing generally and the 18 Footers in particular.  In our instance, to show the boys the nuances behind managing, sailing, tuning and maintaining the boats and to get around the course without any dramas or injuries for the season.

“I want to have some fun sailing with my son and one of his mates (before I get too old) and then set them on the path for the next three years, and make myself redundant on the boat as fast as possible. If the boys can find a suitable third hand for next year I’d be delighted to step off the back and leave them to it.

“I’d like to pay a tribute and acknowledge all the good work Sean Langman is doing in the youth development area as he too recognises the long term benefits and his Noakes Youth team have been one of the form boats this year, and a dark horse performer for the JJ in my view.”

On the business side of Steve’s life, his company One2Three is one of Australia’s leading Naval Archiects and responsible for many of the fast ferries, luxury motor yachts and tourist boats that ply their trade around the harbours of the world – including between Circular Quay and Manly on Sydney Harbour.

In recent years, Steve has also been involved with Iain Murray and Mark Richards on the Wild Oats XI performance development programme under the guidance of Sandy and Boab Oatley.

“Working in such a creative and encouraging team with such daring people has taught me a lot about managing technical risk and the value of loyalty, teamwork and continuous technical development and improvement.  I’m incredibly lucky to be involved in the Wild Oats program and humbled to be sailing with such a great team.”