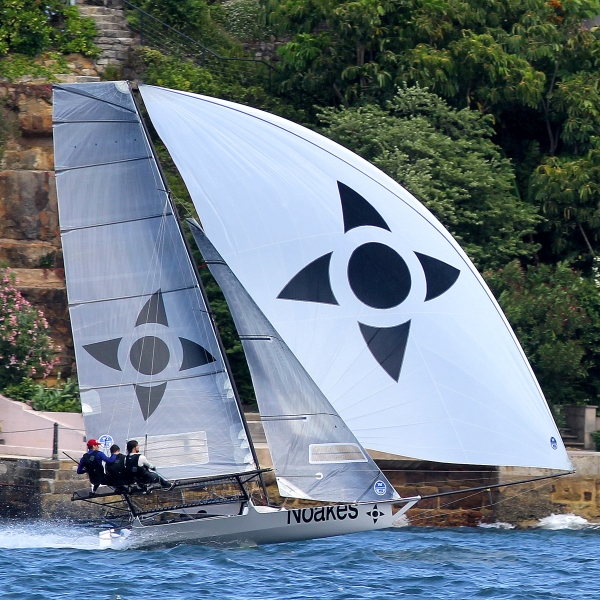 Sean Langman, Managing Director of the Noakes Group, is one of Australia’s best known sailors/yachtsmen with a record of high achievement in numerous classes of sailing boats.

Aside from his wonderful record of achievement on the water, Sean has always been a person with a positive outlook and an ever ready willingness to assist quality young sailors in their quest to achieve results in keeping with their talent.

The 2016 JJ Giltinan 18ft Skiff Championship, sponsored by appliancesonline.com.au, and sailed on Sydney Harbour from 12-21 February, is a perfect example of the Sean Langman philosophy and ability to put together a quality youth team.

Sean has always been a person to ‘put his money where his mouth is’ and has sponsored two teams which will be competing in the upcoming championship.

He will not only skipper his own brand new Noakesailing skiff, with his son Peter and Gerard Smith, but is also the sponsor of the Noakes Youth team, which will be skippered by Ash Rooklyn.

The Noakes Youth team took over the skiff which raced in the 2014-2015 Season as Thurlow Fisher Lawyers.  A few new sails and rigging were added and a group of champion young sailors were recruited for the campaign.

Ash Rooklyn, son of former 18 Footer champion and 18 Footers TV commentator Warwick Rooklyn, has previously had a few races in the 18s, but this is his first full-on campaign.

Joining Rooklyn in the crew are Daniel Nixon, also the son of a former 18 Footrer champion Kevin Nixon, in the bow and Rhys Mara on the sheet,

Daniel has had two years’ experience in the 18 Footer ranks, including several rides on the well performed Thurlow Fisher Lawyers (Michael Coxon) and Panasonic Lumix (Jonathan Whitty).  Aside from the 18s, Daniel is the Melges 24 champion at the 2012 North American, 2014 USA Corinthian, and 2015 Australian Championship.

Rhys hails from Coffs Harbour on the Mid North Coast of NSW and comes to the Noakes Youth 18s team from the 49er class.

There has never been a doubt about the crew’s ability and it was only going to be a short time before we saw the real potential of Noakes Youth.

The first half of the season (pre-Christmas 2015) was disappointing for the young team and results were affected by some gear problems and misadventures at critical times.

While results weren’t there on paper, onlookers were impressed by the boat’s speed and the crew’s ability to match any team in the fleet at various stages of races.

The opinion was that this young team had the ‘goods’ and were going to be at, or near, the head of the fleet as they grew in confidence.

At the recently concluded Australian Championship, the confidence came to the surface and the Noakes Youth team finished fourth on 21 points (equal with third placed Triple M).  The team’s best four placings were 2x third places, fifth and tenth.

Ash Rooklyn, Daniel Nixon and Rhys Mara had not only beaten some of the biggest names in the 18 Footer fleet, but Noakes Youth was the leading boat which had not been specifically built for the 2015-2016 Season.

The first three placegetters, ahead of Noakes Youth, in the Australian Championship were Smeg (Lee Knapton), Thurlow Fisher Lawyers (Michael Coxon) and Triple M (John Sweeny).  All three skiffs were built by Van Munster Boat Builders just prior to the start of the 2015-2016 Season.

Despite the boost to confidence, Rooklyn is taking a very measured approach to the campaign. “I try to look at our first season as a progression and not perfection.  We are just taking each day and race as it comes and try to learn and takeaway as much as we can.”

“While it is a learning and evolving season, we feel if all goes well we could and would be stoked on a top 5 finish at the worlds.”

Sean Langman must feel great satisfaction to see how his young recruits have progressed and the recent results they achieved at the Australian Championship.

While Sean will obviously be looking at the Noakes Youth team’s performance at the JJs, his main focus will be on the performance of his own Noakesailing team, which has also be improving over recent weeks.

Sean took delivery of a brand new skiff for the season and was finally able to sail a competitive skiff with his son Peter.

“Peter and I sail all manner of boats together, from our 1932-built 30ft gaff cutter Maluka through to our ORMA 60 Trimaran Team Australia.  The only thing missing from our sailing was close tactical racing with the spice of speed thrown in,” Sean said.

“The 18s offer great racing and are both exhilarating and difficult to sail well.  My role with Pete and Gerard is to map out a succession plan whereby the younger men can make their way into the class.  I’m thrilled that Pate is still keen to sail with the old man.

“Our tangible goal is finishing at least mid-fleet this season and to improve as we progress through the next few seasons.

“Over recent times, Pete and I have been part of Team Australia Trimaran, which has set two world records; Sydney Hobart in 29 hours and Sydney Auckland in 2 days 19 hours.  The team has also won the coastal classic in New Zealand as well as the Brisbane Gladstone twice on line and corrected.”

Sean’s previous career highlights are Olympic Star Class Australian champion and numerous offshore line and handicap wins with Grundig and AAPT.  He also took a bronze medal at the 49er world title in 1998.

The Australian 18 Footers League’s President, John Winning said:  “Our club is very happy to see Sean back in the 18s in a competitive boat with his son Peter, and Gerard Smith, and we fully appreciate Sean’s efforts to introduce young sailors into the class as it fits perfectly with the Club’s policy of introducing young talent to the 18s to ensure the long term future.”