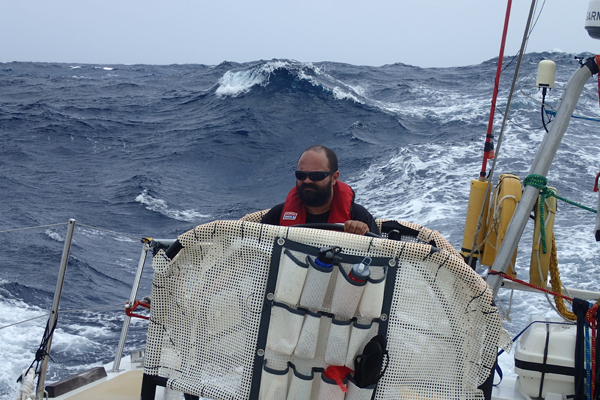 With six days to go until the Clipper Race fleet arrives in Vietnam, the teams heading north are enjoying much easier upwind conditions which are forecast to continue for the next couple of days, making for an enjoyable finish to the Da Nang New Discovery of Asia Race.

Garmin, in third place follows GREAT Britain, and is approximately 120 nautical miles behind leader Derry~Londonderry~Doire, on an easterly course as it makes its way to the next waypoint. Skipper Ash Skett reports: “It's business as usual on board Garmin today and not much has changed in 24 hours really. The weather is beautiful. Clear blue skies, a temperature that doesn't make you feel like you are melting and a pleasant breeze blowing through the boat makes the unpleasantness of a few days ago a distant memory.

“Right now we are staying as far east as possible as we look ahead to a wind shift predicted for later today. This should mean better progress once we tack and head north, although there is sure to be plenty more tacking to come.”

Clipper Race Meteorologist Simon Rowell sends daily weather reports and GRIB files to the fleet to help the Skippers and crew decide on which route to take according to the conditions forecast. He says: “It looks like most of the pounding has stopped now for the boats heading upwind although it is still hot and humid. The north-east monsoon is starting to come back off the flow down the next low forecast to head off over Japan around 15 February. The wind, as it comes off the high and over the Philippines, will be quite shifty and patchy, so it’s still very much HOOB (head out of boat) weather to keep an eye out for any squalls on the approach.”

Eight boats have already rounded the two southern waypoints and ninth placed PSP Logistics is not far off the Vietnam virtual mark, with Unicef expected to follow suit ahead of Mission Performance and Visit Seattle. Although sailing downwind allows PSP Logistics to race under spinnaker, the team is frustrated it is not recording higher speeds, according to Skipper Max Stunell: “We are currently continuing to plod on under kite, the distance to the waypoint being about 85 nautical miles or at this rate about nine hours.

“After rounding it, we then have to harden up into the wind which is likely to mean dropping the kite before heading to the next course mark another ten hours on. It is then a beat to the north-east and we need to get as far as possible before the monsoon winds start to blow again and the seas start to build, otherwise it is going to be a real bun fight trying to get to Da Nang.”

The Race Director intends to manage the length of the race to try and ensure that the yachts arrive on 17 February which is the first day of the arrival window. He expects most yachts to arrive on this date.

As you will have noticed on the Race Viewer, with the new course and teams crossing paths, the Current Race Standings table may not always be exact so please refer to the map for more accurate positions.