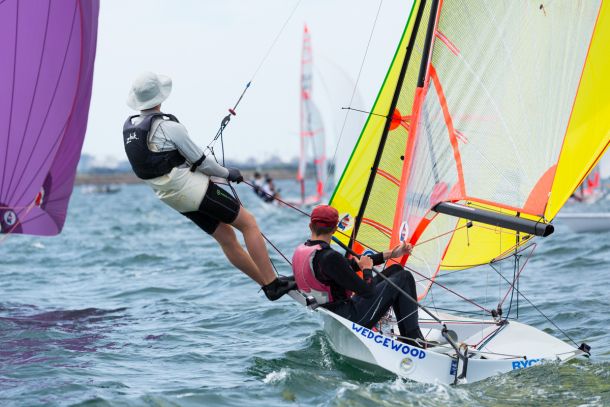 Hot and gusty west nor’westerly winds made day two of the Yachting NSW Youth Championships on Sydney’s Botany Bay the perfect place to escape the worst of the 33 degree spring day.

A morning glass-out dictated the race committee postpone the scheduled start time and keep competitors ashore at Georges River Sailing Club until the land breeze began to build and the four course areas could be established by officials and volunteers. Help has come from yacht clubs right around Botany Bay, as well as the Sydney Harbour and Broken Bay, to support Yachting NSW and GRWC to once again stage the state’s largest youth title.

Dry westerly winds between 7-12 knots came and went and swung frustratingly around the compass, playing havoc with some races that began promisingly then were abandoned when a fair course became impossible to maintain.

On the 49er track the two Toms from Belmont 16s, Tom Crockett and Tom Grimes, stepped it up to give the Objective lads of Jim Colley and Kurt Hansen something to think about. Crockett is one of the younger skippers in the class, at just 13, while Grimes crews and uses his weight on the wire to keep the skiff well balanced. “Tom’s a local with plenty of natural ability and we’ve been mates for a long time,” Grimes said of his new skipper.

The talented teenager is also balancing high-level competition with his HSC and exams are in a week. Grimes opted to complete the normal year 12 workload, rather than the Pathways option, and says he’s aiming for an ATAR in the 90s. With so much going on in sailing he says it can be tough hitting the books. “It’s discipline knowing I need to sit down to schoolwork. Dad said I should get my studies over with so I can sail and do a three-quarter load at Uni and Mum’s an academic and is writing her PHD – I see her managing everything.”

Grimes’ NHS Plasterboard Timber moved on Objective in today’s opening races and the two crews were sitting side by side on eight points, then the Toms, both NSW Youth Sailing Team members, posted a fourth in the final race 7 and slid back to second overall by two points.

“Yachting NSW has been building the YST program for five to six years and we are starting to see the results. Going into the youth worlds in Langkawi just after Boxing Day, Australia has secured places in multiple classes, and some of those were in the first YST intake. They are live examples of the YST pathway and good examples for other keen sailors to follow.”

Cargill highlighted the great support from QLD and Victoria and their talented sailing programs, “It’s almost an interstate rather than a state regatta, and well supported by parents as you can see from the number of RIBs out there.”

Richard Scarr is Cargill’s Tasmanian equivalent and at Georges River he’s in charge of the Tassie team of 16 youth and invited class sailors. His state’s emerging talent program is a joint effort between the Tasmanian Institute of Sport, Yachting Tasmania and the Royal Yacht Club of Tasmania.

On attending the NSW championship Scarr says, “It’s a really important regatta for us, a way of checking in. The opportunity to mix with the fleet at mainland regattas is a must; we can come away and make changes leading up to the nationals.”

Racing is due to commence from 1000hrs tomorrow, Monday October 5, and a high pressure system over the western Tasman Sea means winds are likely to be light and variable and another hot day is on the cards for Sydney-siders.  After the final race the placegetters will be acknowledged at the official trophy presentation in the GRSC clubhouse.