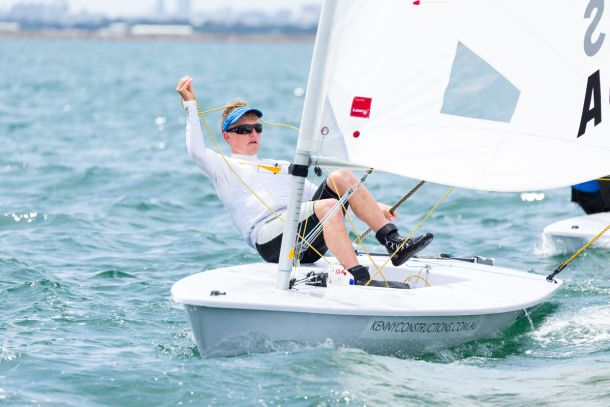 Final results at the Yachting NSW Youth Championships stand at the close of racing on Sunday, the breeze shutdown thwarting any chance of a start on Monday October 5, 2015 for all classes other than the Optimist Green fleet.

Locals described the morning winds on Botany Bay as Katabatic, a local offshore wind that occurs when the land cools more quickly, and to a greater extent, than the sea, setting up the land breeze circulation.

Close to 300 dinghies and skiffs headed to their respective course area in hope but the window was too tight and after an hour long wait officials sent everyone back to shore and out of the hot sun, and that’s where the racing ended.

As event manager Andrew Hawkins highlighted, “It’s a pity about the final day but the sailors understand no wind is part of the sport.”

“It was really close and would have been fun to have a tussle with the other fellas on the final day, they are really good, and that Crockett he’s a grommet – and smart,” Hansen said. Both Hansen and Colley have been studying for the HSC for the past month, once school finishes they’ll resume training for the youth worlds in Malaysia and messing around in their 49er. The upcoming summer season will the pair’s last on the youth circuit, the cut-off being 19 years old in December.

Hansen and Colley won last year’s NSW state title on the October long weekend, their first regatta sailing as a new combination. “The competition has got a lot better since then,” Hansen noticed.

Nathan Bryant’s two point lead going into day three was enough to deliver up the overall Laser 4.7 win to the Royal Prince Alfred Yacht Club sailor when racing was abandoned. Bryant is coached by Traks Gordon and is showing lots of promise, a win at Sail Sydney last December and now a state title.

The focused grade 7 student missed last night’s NRL Grand Final, heading straight to bed beat after a long day on the water in tricky conditions, saying this morning during postponement, “I was tired after yesterday and it does get harder to concentrate towards the end of a regatta.”

Bryant is aiming for the Malaysian youth worlds following the ISAF Sailing World Cup in Melbourne and Sail Sydney, all adding up to a big summer for the second half of the talented Bryant siblings from Pittwater. Older sister Natasha finished eighth in the 29er class skippering Smiling Assassins.

“It feels great, this regatta is a good check in to refocus and see how everything’s going in terms of boat speed and preparation,” the new state champion said just before receiving his trophy at the final awards ceremony. This Alexander’s third year in the Laser Radial class and representing Australia at the Olympics is his ultimate goal.

Canadian dual Olympic sailor Mike Leigh is Alexander’s coach and mentor and the YST sailor who is starting year 12 this week says sailing is his obsession, and he wants to go all the way. “You do it as much as you can and the rest follows. I’m out on the water 3-5 days a week and then at the gym and boxing plus school. It’s a juggling act fitting everything in but I manage.”

The only all girl team to take out the top podium placing at the NSW states were Youth Sailing Team sailors Charlotte Griffin and Chelsea Connor in the 420 class, their first win as a new combination. Representing Middle Harbour Yacht Club and RPAYC, Crush edged out Xavier Winston-Smith and Alec Brodie on Selden for Sailing, and Connor admits it feels good to beat the boys. “They were trying to psyche us out this morning saying there was only one point in it, but we don’t let them get to us…. it’s good to have a joke around,” she laughed.

Finishing so close to second illustrates the tight class racing and gave the teens plenty to fight for. Connor found the experience of incorporating tides and racing on Botany Bay really helpful for their learning.

The pair, who met four years ago sailing Optis, have a busy calendar ahead; Sail Sydney, Sail Country at Albury/Wodonga, the Australian Youth Championships in January at WSC then QLD Youth Week. At the end of the circuit is their final aim for the season, qualifying for the 2017 youth world title.

Final points were tight in the Optimist Open fleet. Across seven races, newcomer to the top three, Ryan Littlechild’s Rallar, managed to out-sail Archie Cropley’s Archernator 3.1 and Australia’s top ranked Opti sailor, Henry Otto skippering Chippa, by one point. “This is the first time I’ve been at the front,” the Woollahra Sailing Club junior said, not realising he’d taken out the series. He says he’s improved a lot coming into this season and has a different mind-set, something he attributes to his state coach Rob Brewer.

The Royal Yacht Club of Tasmania’s Flying 11 teams of William Wallis and Lara Racape on Flying Colours and Brendan Crisp and Daniel Maree on Wedgewood hogged the top of the leaderboard all regatta, posting top placings consistently over seven races. Wallis and Racape are a new combination after Will stepped in to helm for Lara’s older brother, who broke his leg some weeks ago.

On their success at the NSW title, scoring an extraordinary six wins and one second, Wallis agreed, “We sailed fast and we picked the shifts better than anyone else. It’s been light and tricky but we seemed to battle through.”

In the Invited classes Thomas Larkings from Lane Cove 12’ Skiff Sailing Club made a clean sweep of the Sabot 1-up results sheet with six wins from six races against a field of 24 other Sabot sailors.  In the BIC Open results Thomas Wright and Sailing Biro achieved the same perfect score, six from six for the Queensland sailor from Southport Yacht Club.

Final words from the event manager

Andrew Hawkins speaking on behalf of Yachting NSW said he was especially pleased with the support from the other states; Tasmanian, Victoria; Queensland and the ACT. “Those teams making the effort to be part of the state title demonstrate the status of the regatta, and gives their sailors different benchmarks. We had no safety issues and kids took our safety messages seriously, and the support from parents has been extraordinary with at least 80 parent and coach boats out there and others watching the Optimists off Ramsgate beach through binoculars.”

Hawkins made special mention of the staff and volunteers of the youth championship host, Georges River Sailing Club, and the Optimist Green fleet, some of who are on the pathway to being future state champions, for their enthusiasm.