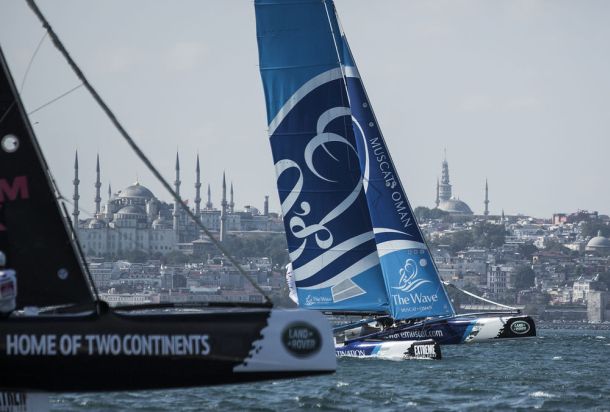 Racing against the iconic cityscape of Istanbul. Photo Lloyd Images.

Cargo ships and tankers were brought to a standstill today as the Extreme 40 fleet raced down the Bosphorus Strait through the heart of Istanbul.

Taking line honours for the five-mile sprint – also known as the “Bosphorus Race” – was the form team, The Wave, Muscat. They put in an outstanding performance, clinching the win with just metres to spare over second-placed Red Bull Sailing Team and Oman Air in third.

In classic ‘Stadium Racing’ style, the eight Extreme 40s then lined up for a non-points scoring 1.7mile exhibition race from Europe to Asia ending in spectacular style in front of the iconic Aya Sofya, the Blue Mosque and the Extreme Club.

Four electrifying minutes and three edge-of-your-seat seconds later, local boat Team Turx rocketed across the finish line at 25.5knots, beating The Wave, Muscat much to the delight of the cheering crowd and setting a new benchmark speed record.

“It feels fantastic, we have been waiting for this moment all year. To win the speed race in front of so many spectators just shows how the Extreme 40s have captured the imagination of the public in Turkey,” commented Team Turx co-skipper Edhem Dirvana.

The sun came out and the gusty 20-knot breeze continued for the rest of the afternoon as the teams completed seven high-intensity races – Extreme 40 regular fare – in near perfect conditions.

The Wave, Muscat’s British helm Leigh McMillan, who was dubbed a ‘ruthless point scoring machine’ earlier in the week, lived up to expectations.

Adding four race wins to his already impressive scoreline McMillan and his crew have now won half of the races sailed here in Istanbul and have only missed out on 27 points so far in this Act according to the SAP Analytics.

With McMillan at the top of the leaderboard going into the final day, the battle is on for the remaining podium places.

Currently in second place, on 168 points, Oman Air continued their consistent form with another excellent day’s racing. Skipper Stevie Morrison will surely have an eye on his first podium this season if the team can hold their nerve in tomorrow’s double points scoring final.

“You set yourselves targets and of course we want the podium. There is always that element of pressure but ultimately there is nothing you can do except focus, push and do your best,” said Morrison after racing.

SAP Extreme Sailing Team slipped down the rankings into third after missing two races this afternoon due to a mainsail halyard problem. But the Danes came back all guns blazing with a second place finish in the next race and a win to finish the day on a high.

GAC Pindar kept it consistent securing their fourth place on the leaderboard, whilst Lino Sonego Team Italia jumped themselves up the standing to fifth place with two race wins.

Rounding up the standings Gazprom Team Russia finished the day in sixth with Red Bull Sailing Team pulling themselves off the bottom with three second placed results after missing seven races yesterday due to a broken mast.

Racing continues tomorrow for the final time in Istanbul where Leigh McMillan is going for his fifth Act title this year. Watch it live on the official website from 1430 (GMT+3).