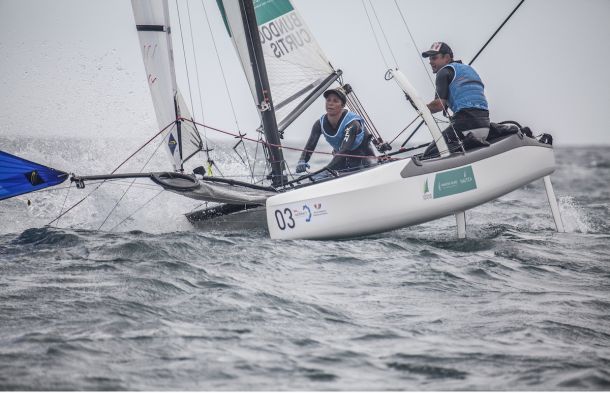 Bundock and Curtis at the Nacra17 Europeans. Photo Laura Carrau.

Winds of up to 12 knots offered ideal conditions for the exciting final at the Nacra 17 European Championship. The event finished on Saturday after a total of eleven races over four days of racing and after two days of racing had to be cancelled due to too much wind or the lack there of.

Bundock and Curtis went into the final top ten Medal Race ranked second and after a sixth place in the double-points Medal Race finished the event in overall second and four points behind the British winners Ben Saxton and Nicola Groves.

“It was a very strange race today, the positions changed a lot and we were first place for a while, but we finally lost. The British have done a great job. It was a great championship and I think everyone is happy. The setting was magnificent, with very good facilities, so we had a good race,” Darren Bundock said.

Three points behind the Australians, completing the podium of the open championship and claiming the European silver were Olympic medallist Allan Norregaard and his crew Annette Viborg from Denmark.

Hosted at the Barcelona International Sailing Center (BISC) 42 teams from 23 countries competed in Barcelona. Darren Bundock of Nina Curtis were the only Australian Team crew competing in Spain.

The Nacra 17 European Championship was organized by the Sports Federation Union of Catalonia (UFEC) and the Catalan Sailing Federation with the support of the Barcelona City Council, the Government of Catalonia, Barcelona Royal Yacht Club (RCNB) and the Royal Maritime Club of Barcelona (RCMB).