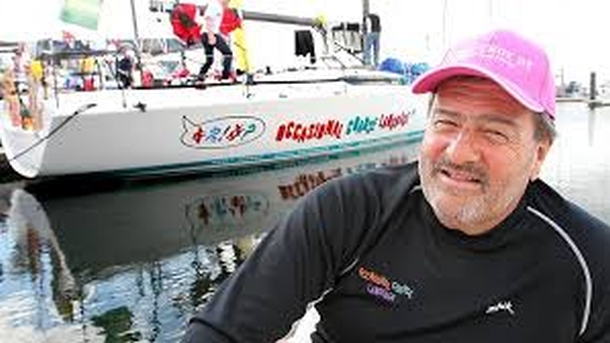 Warwick Sherman is a fighter. He’s also an experienced sailor. Combine the two and you get a pretty formidable force that recently tried to win another Division gong in the 2014 Rolex Sydney to Hobart Yacht Race.

Rewind to 2012 and with barely five months recuperation under his belt following a massive dose of chemotherapy and a stem-cell transplant, Warwick competed in and won Division 2 of the 2012 Sydney to Hobart but admits he was far from peak physical condition. “I was mentally prepared but struggled physically and relied heavily on the crew to finish the race,” he said. “The fact we won was incredible!”

In preparation for the recent 2014 race, Warwick felt he was ‘a thousand times’ in better physical shape than 2012. He also had a final check-up with his oncologist who gave him the OK to sail again. “There was still no sign of the cancer and my Doctor told me he’d just got back from a conference in San Francisco where there was news of two new drugs that should be ideal for me if the Lymphoma returns.”

So, with both physical and mental preparation ticked off, Warwick and the crew of Occasional Coarse Language Too set off for Hobart on Boxing Day only to be stymied by Mother Nature just outside of Wollongong. “You’re not always going to win, but I think the value in having done it supersedes all that,” he said.

Even though he was forced to retire early from the recent race, he and his new yacht, Occasional Coarse Language Too, are winners in the Snowdome Foundation’s eyes. Warwick and his yacht’s sponsor, Concierge Business Travel, have generously donated the yacht’s $10,000 sponsorship fees to the Snowdome Foundation and the fight to ‘make hope real’ for blood cancer patients.

Having fought and beaten the rare form of non-Hodgkins lymphoma that he was diagnosed with in 2010, Warwick is proud to be able to support Snowdome. “Not finishing the 2014 race was disappointing on many levels,” says Warwick. “But the fact that I’m still alive to try and also support a cause that I passionately believe in is actually far from disappointing!”

Concierge Business Travel’s CEO, David Greenland, adds “We fully support Warwick and his wish to help other blood cancer sufferers. He’s in remission which is great but there are others who are waiting for new treatments or drugs so we are more than happy to support Snowdome’s work to accelerate these next-generation therapies.”

The Snowdome Foundation* is delighted to receive the support from both Warwick Sherman and Concierge Business Travel** and we thank them for helping to accelerate new therapies for Australian men, women and children with blood cancers so that they can live longer, better lives.

* The Snowdome Foundation’s mission is to accelerate new therapies for Australian blood cancer patients to help them live longer, better lives. Formed in 2010, Snowdome has a deliberate mission to ‘unlock new treatments’ by channelling government and private philanthropic investment into early phase human clinical trials of next-generation drugs and therapies. In doing so, Snowdome is distinct, yet complementary, to existing efforts from other organisations supporting Australians with blood cancers (myeloma, lymphoma and leukaemia). Snowdome’s work aims to fill a gap, rather than overlapping or replicating activities that support the urgent needs of Australian blood cancer patients. No other organisation has this focus for blood cancer.

** Concierge Business Travel specialises in managing the travel needs of companies, both large and small. They offer experience, knowledge and a passionate vision to deliver exceptional service and commercially savvy travel programs. A combined 50 years of travel industry experience is utilised to tailor travel solutions to drive their customer’s business further. As evidence of their credentials, Concierge Business Travel is the official Travel Management Company of the Australian Olympic Committee (AOC) and provides 360 degree support to AOC Executives, officers, employees and Australian Olympic Team members. To find out more, please call Concierge Business Travel on 1800 049 049.