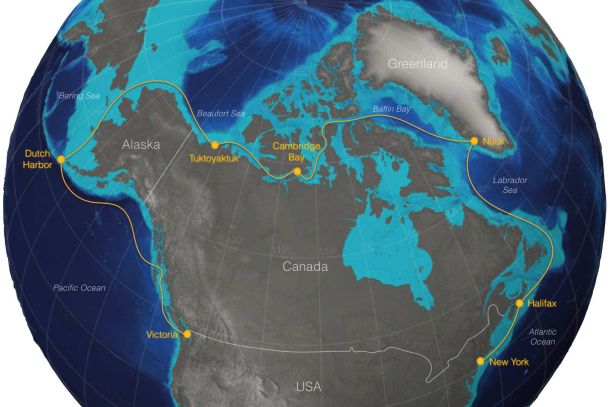 The route for Sailing the Arctic Race.

A new yacht race, planned for 2017, will take competitors through the North West Passage from New York to Victoria, British Columbia.

The race website claims: Starting in Summer of 2017, STAR teams will sail six race legs with stopovers in incredibly diverse host cities. Each leg will be weighted for points leading up to an overall race winner when the fleet crosses the finish line in Victoria, BC.

In each host city, sailors will resupply and rest before facing the next challenging leg the Arctic has for them. A mobile boat yard will meet the race fleet at each stopover, making repairs quick and easy even in some of the most remote communities in the world.

Visitors will get the chance to see the cutting edge yachts racing through the Arctic, while enjoying all the entertainment and local flavor each host city has to offer.

The Star 46s in which the event will be held are described as “cutting edge new volcanic fibre boats, designed especially for the Arctic environment”.

Volcanic fiber, scientifically more well-known as basalt fiber, is described as a revolutionary new material in the sailing world. “Extra strength without excess weight, durability without toxicity, and a low environmental impact in the manufacturing process are all factors that make volcanic fiber the ideal material for an Arctic ready race boat.”

FIPOFIX is an Austrian boat design company spearheading the development of volcanic fibre ocean sailing yachts. In early 2014 a prototype called the Open16 finished its singlehanded ‘proof of concept’ journey across the Atlantic non-stop from Europe to North America and back for a total trial distance of 10,000 nautical miles.

The Notice of Race and registration details are available “upon serious inquiry”.  Interested sailors are asked to contact Robert Molnar, CEO of the STAR Campaign for more information.