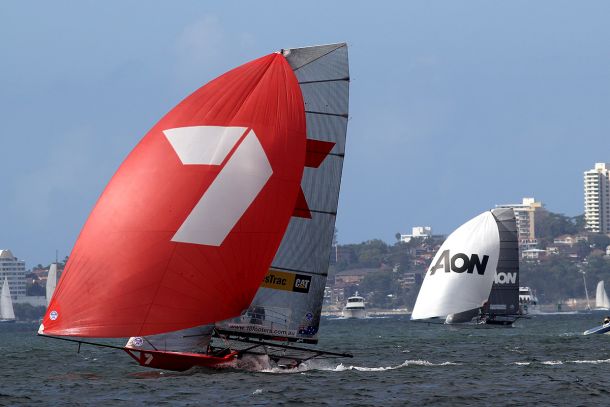 Gotta Love It 7’s team of Seve Jarvin, Sam Newton and Scott Babbage officially became the 2015 JJ Giltinan 18ft Skiff champions after the regatta concluded on Sydney Harbour today. The team had already secured the title before today’s race and skipper Seve Jarvin had become the most capped skipper and competitor in the championship’s 76-year history.

Jarvin originally crewed with Euan McNicol on Club Marine in 2005 and has since skippered seven championship winning Gotta Love It 7 skiffs to victory. His record surpasses Andrew Buckland for the most number of wins. Buckland won five titles with Iain Murray on Color 7 then two more with Peter Sorensen on Tia Maria.

Fittingly, Buckland was on hand to present Jarvin and his team with the championship blue ribbon.

Although the win was already secured, Gotta Love It 7 showed her real championship quality as they dominated the latter half of the course to win by 2m15s. New Zealand’s rookie AON team (Will Tiller, Harry Thurston, Tim Snedden) gave some indication of what may happen in future JJ Giltinan Championships when they gave a wonderful performance to finish in second place. Coopers 62-Rag & Famish Hotel (Jack Macartney, Peter Harris, Mark Kennedy) was a further 12s back in third place.

With the championship winner already decided, today’s race was vital for the next four placings in the regatta as only eight points separated the four teams involved. Soon after the start Thurlow Fisher Lawyers (Michael Coxon) gained a substantial lead over her nearest rival Mojo Wine (Lee Knapton) and the overall result for second place was soon established. U.S. champion Howie Hamlin produced another good result today with a fifth place to finish third overall in the regatta.

Club racing resumes next Sunday. The club’s regular ferry will follow the racing, leaving Double Bay Wharf, alongside the clubhouse at 2.15pm.