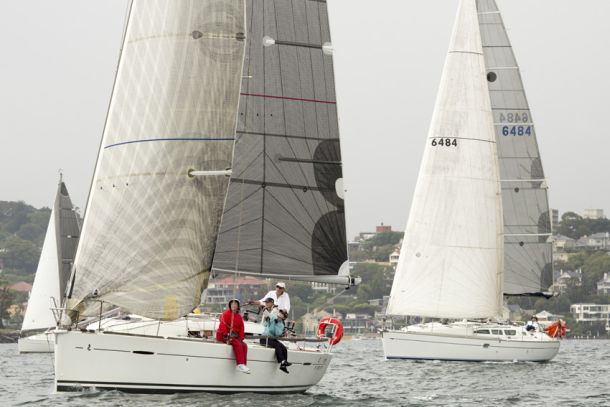 It was a case of slow and steady in the Cruising Yacht Club of Australia’s Grant Thornton Short Haul Series in the race from Sydney to Pittwater today, and Ian Guanaria’s patience was rewarded when his One More-No More was declared overall winner of both PHS and IRC classes.

When the gun fired to start the passage race at 11.00am this morning, there were no illusions as to how the day would pan out. With fog starting to roll in, little breeze and the slow water-torture drizzle falling from leaden skies, everyone knew it would be a test of patience.

Only seven of the 14 starters finished the race within the time limit. Guanaria and his Beneteau First 35 were only beaten over the line by Cyrene 3, Michael Selby’s X-412 yacht, little more than three minutes separating them.

With the PHS handicaps applied, One-More-No-More was at the top of the leaderboard by just oven seven minutes to Jon Short’s Beneteau 40.7, L’Attitude, with Pat and Roberta Easton’s Beneteau Oceanis 50, In Cahoots, filing out the top three. Cyrene 3 claimed fourth place overall. Guanaria had the goods again in IRC, beating Cyrene 3 and L’Attitude to the punch.

“The daily double,” Guanaria quipped from Pittwater. “I’m mentally drained and exhausted after that race,” admitted the yachtsman whose crew consisted of his wife Jean and three other women, replacements for his usual crew who were contesting other events.

“The ladies kept pushing me. We got a good start, then a light south-easter came in and we were in good shape. We put our jib top up when we got outside. My son Shane made it for me and it did an awesome job,” commented Guanaria who said they did not see more than 6 knots until they were inside Pittwater where up to 10 knots awaited them.

The only other yachts to finish today were: Marloo (George Girdis) in fifth place, followed by Phil Cutts’ Assassin and CYCA Commodore John Cameron and his More Witchcraft. None of the Division 2 boats finished.