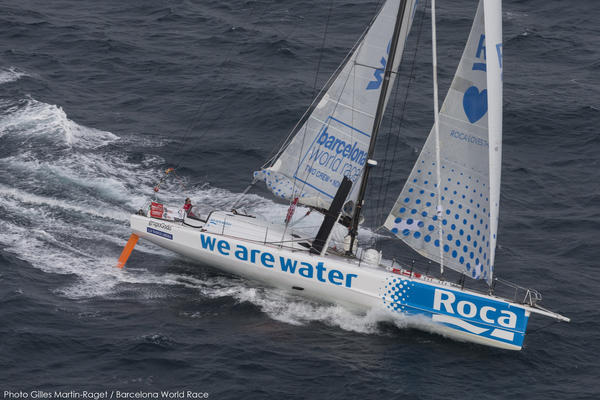 We Are Water in the Barcelona World Race. Photo Gilles Martin-Raget/BWR.

Renault Captur were approaching Wellington NZ  this Saturday afternoon ready to set in motion their plan to repair their damaged starboard rudder blade. With 60 miles to go, sailing upwind in a short, choppy sea at the eastern entrance to the Cook Strait, Jorg Riechers and Sébastien Audigane confirmed once again that they aim to be finished their technical pit stop and on their way during Monday.

“We are calm and determined to stay in the race,” they said as they prepared to make their New Zealand landfall.

The misfortune of Riechers and Audigane, who had been fourth since leaving the Mediterranean, has been to the immediate benefit of Bruno and WillyGarcia on We Are Water. On this morning's 0500hrs ranking they were credited with fourth place and at around 1400hrs UTC this afternoon the Barcelona brothers passed the actual longitude of the unfortunate Renault Captur, now 690 miles to their north.

So We Are Water have now taken a solid fourth place on the rankings, 714 miles behind GAES Centros Auditivos. And with One Planet, One Ocean & Pharmaton about one normal day's racing miles behind, there seems every chance that Aleix Gelabert and Didac Costa will rise to fifth place on Sunday. The clock will be ticking for Riechers and Audigane as soon as they reach the dock.

Anna Corbella, co-skipper of GAES Centros Auditivos, appeared to play down suggestions that just because she and Gerard Marín are so close to Neutrogena that they would inherently push harder to pass their rivals. She confirmed that keeping themselves and the boat safe is much more important than any possible short term gain. That said they are all but looming in Netrogena's rear view mirror, tracking the wake of Guillermo Altadill and José Munoz, only nine miles behind this afternoon and still, seemingly just a fraction quicker than the Spanish-Chilean duo. Corbella confirmed in Catalan once again that their AIS is not working so they could not track Neutrogena minute by minute.

“Every day we are closer to Neutrogena and are very happy. I think the boat which has less problems will be in front. It is difficult to have more speed here when you have to take care of the boat and all the material. It is not easy to push the boats hard when we have to take care not to break things to exit thi s Pacific Ocean in good shape and to really begin the battle in the Atlantic.”

Life remains tough for Spirit of Hungary. After having to climb the mast in 30-40kts of breeze to get the mainsail down because a slider car had partially disintegrated and jammed, Conrad Colman explained that he will still need to climb the mast to recover the slide and to then evaluate its state and usefulness. Another system can be set up, but a stop in New Zealand for a spare is not being discounted. As such that would be a tough call, given that if they did not they would pass the longitude of Wellington on Tuesday with a fighting chance of passing Renault Captur too.

The only problem for Cheminées Poujoulat seems to be the strong winds and big seas. Bernard Stamm and Jean Le Cam, the leaders are making 13kts carving the start of the long arc south and east to Cape Horn 1220 miles ahead of them. Indeed tonight they will be closer to the n otorious Cape and the exit of the Pacific than their nearest challengers, Neutrogena, are to them.

Anna Corbella ESP GAES Centros Auditivos: “We feel very happy. We are satisfied with our speed and performance. Every day we are closer to Neutrogena and are very happy. I think the boat which has less problems will be in front. It is difficult to have more speed here when you have to take care of the boat and all the material. It is not easy to push the boats hard when we have to take care not to break things to exit this Pacific Ocean in good shape and to really begin the battle in the Atlantic.

“For the moment the boat is good, we don't have any major problems, we have little things that we are following to see what happens, but for the moment we are OK, but you never know. You see what happens with other boats which have problems and they come suddenly so you never know. One day you are OK the next day you have a problem with the rudder or something. We have to take care and take care of the boat.

“We a feel a little bit isolated. We have a lack of information of everything compared to being at home. You feel it. You need to know things. We are like in another world. We ask our family and friends to send us information about what is happening in the world.
We have emailed some of the other Spanish boats, not a lot, maybe when they cross a Cape or something in Spanish. We are more or less in the same situation so it is nice to chat.

“For me I prefer to overtake a boat rather than to be be trying to avoid being overtaken. It is easier for me. I prefer to be in second trying to catch first!”

“For the next few days we have a forecast for about 15-20kts more or less, for the next two or thre days passing New Zealand. We just concetrating on just doing as much miles as possible going towards Cape Horn. So our next goal is Cape Horn.

“The boat is in perfect condition. We don't have any problems at all. We are in the Pacific Ocean with the best conditions for the boat, and we are well rested and so we don't have any excuses about ouselves and the boat.

“We have done half of the race. For me that has felt quite short and so I expect the next 50 days more it will feel short because every mile is approaching home. Cape Horn first and then approaching home, so I hope the next miles pass as quick.”