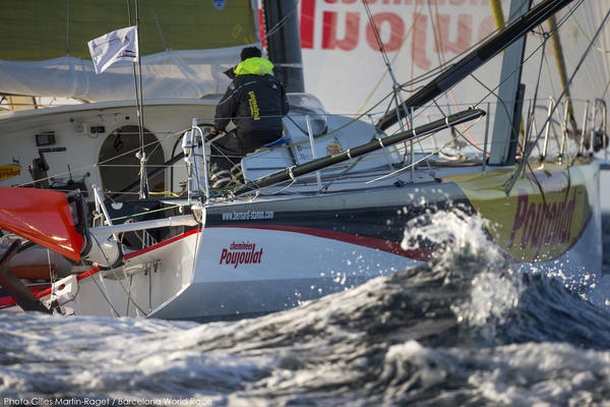 Mythical, revered, renowned, legendary…..but above all Cape Horn is a time for extra care and caution. While observers and race fans may be poised to share and enjoy the passage of the Barcelona World Race leaders Cheminées Poujoulat this Tuesday evening, Swiss co-skipper Bernard Stamm of race leaders Cheminées Poujoulat was clear that there will be little time for celebration or reflection on board as they start their release from the Pacific.

The passage of the most southerly tip of South America marks the final 'left turn' up the Atlantic and it engenders a feeling that the homeward climb is really starting. If the race is broadly split over three months, then they are two thirds done. 'All' that is left is the final three and four weeks from Cape Horn to the finish line off Barcelona's iconic W-Hotel.

Stamm also reminded us that they are not out of the woods yet, that in fact they still have five our six days to get north of the Roaring 40s, but these days are suffused with the knowledge that – after a month or five weeks of relentless dampness, chill and days of strong winds – a long period of warm weather and settled trade winds are on their horizon.

His note of caution is not without foundation. His first passage of Cape Horn was while leading the Around Alone solo race in 2003. Ironically it was also on the 24th February.

Approaching Cape Horn 12 years ago to the day his IMOCA 60 < i>Bobst Group-Armor Lux fell off a huge wave and cracked the head of the keel. He did effect a temporary repair but had to make pit stop into Port Stanley. And of course co-skipper Le Cam's 2009 experience weighs on his own mind.

The ETA for leaders Cheminées Poujoulat at Cape Horn is around 2300hrs this Tuesday evening. That timing means Stamm and Le Cam will pass in the dark of evening local time, they have kept their foot off the accelerator as much as possible to preserve their boat and themselves.

Winds are set to remain in the westerly quadrant to give them a fast, direct passage through the gap of the Le Maire Straits between Staten Island and Tierra del Fuego and then west of the Falklands.

Speaking this morning Stamm confirmed that any celebrations will be muted:
“It will be much like we celebrated the new year. Just because we pass Cape Horn we will not stop operating the boat as it is where there is a lot of work to do. We will be happy when we will be passed, we will tell a story or two. But we will keep going on our merry way.”

It is an exit from the Big South?
“Well that's not really true. We don't get out of the Roaring 40s for five or six days. We still have a good lump of the Southern Ocean after the Horn. It's true that it's the start of the way out because it is time to go up more north.  In fact the 'the South' continues with us for a bit. The depression we have now, we'll keep it to go up north a bit. It will generate strong winds from SWW we will have to the Falklands and perhaps further.”
Cheminées Poujoulat's lead over Neutrogena is about 1060 miles.

Later this afternoon or early evening Spirit of Hungary, Nandor Fa and Conrad Colman, will arrive in Bluff, South Island NZ to start their technical pit stop. Top of their jobs list is the replacement mast track car for the halyard lock, but Colman talks of tooling up for keel and electrical repairs.

“Its currently blowing 44 knots in the passage of a little cold front. Visibility is almost nil thanks to the driving rain, and its supposted to be summer in the southern hemisphere!
In spite of our cold welcome, we are excited to touch down in Bluff in less than 12 hours to start our pit stop. My uncle Gray has collected spares for sails, electronics and keel components and we'll meet up with our famliy technical crew soon after we get in.”