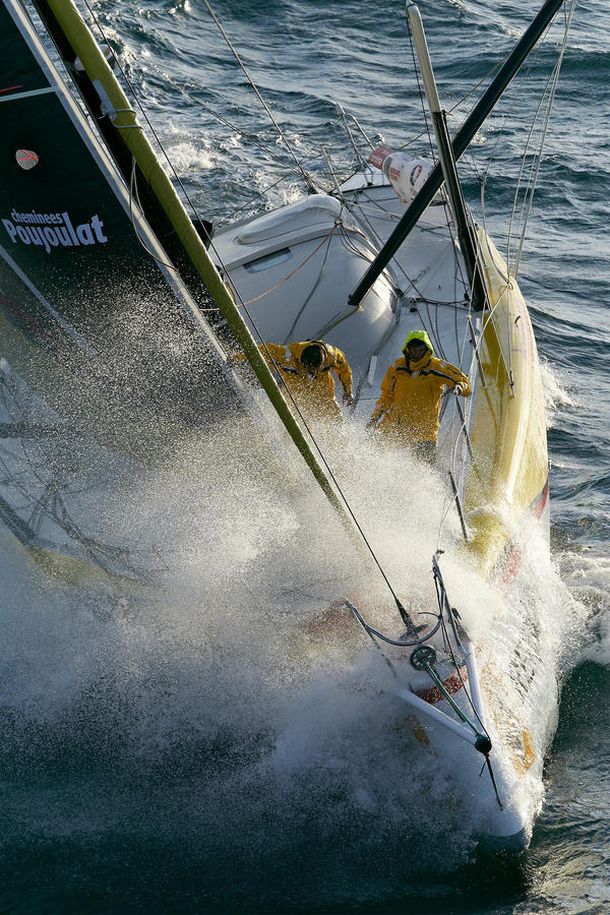 With Cheminées Poujoulat making good progress up the Atlantic, making close to 18kts, 120 miles SW of the Falklands, Cape Horn marks the frontier between the two different worlds inhabited by skippers on the Barcelona World Race.

All but two pairs, the bookends of the fleet, are still awaiting their release from the Big South, the relentless grey, chilly, damp world. For Bernard Stamm and Jean Le Cam, bows of Cheminées Poujoulat pointed NE, there is the added vigour of knowing every mile north is a mile closer to sunshine and tradewinds, a mile closer to Barcelona, and a mile away from their Southern Oceans escapades. And for seventh placed Nandor Fa and Conrad Colman in Bluff, South Island NZ, there is an unfortunate but not unpleasant technical pitstop as they make repairs to ensure a less troublesome second half of their race.

Cheminées Poujoulat had a reasonable passage across the border last night, under the cover of darkness. They crossed into the Atlantic passing 14 miles south of Rock at 00:53 UTC, after 55 days 12 hours and 53 minutes of racing. This afternoon Stamm and Le Cam passed the Strait of Le Maire, between Tierra del Fu ego and Staten Island, and their next choice is which side to leave the Falklands. So far the windward, west side looks better and a shorter route.

Tensions remain high between second and third. But by virtue of better, stronger breezes Guillermo Altadill and José Muñoz have progressively driven a bigger and bigger wedge between themselves and third placed Anna Corbella and Gerard Marín. The GAES Centros Auditivos pair have found themselves – rather incongruously – upwind in moderate breezes and so losing miles to Neutrogena. From being within five miles at the start of the week, they are now 115 miles astern of second place.

“I think we've gone faster [than the Neutrogena] most of the time,” Corbella said today, “But there have been times when they escaped because we slowed down for technical reasons. We just try and hold on for a good fight in the Atlantic, to try and stay relatively close.”

For Renault Captur, now back at 48 deg S and targeting the Furious 50s again, there is finally the prospect of pulling miles back on fifth and fourth, One Planet, One Ocean & Pharmaton, and We Are Water.

The delta between the two Barcelona boats, One Planet, One Ocean & Pharmaton and We Are Water has now shrunk from 600 miles to 160 in a week. And with the possibility of Renault Captur progressively getting back to them both, an interesting three cornered fight might just be on the cards for their ascent of the Atlantic.

Making their pit stop in the country of birth of Conrad Colman, one might have hoped for a more hospitable welcome for Kiwi Colman and his Hungarian counterpart Nandor Fa. But the duo had driving rain, winds over 50kts, and chilly, wet conditions for their final approach.  Spirit of Hungary tied up yesterday at 22:50 UTC at the port of Bluff, on the South Island of New Zealand.

Their list of repairs is longer than expected, having discovered on the way in that they needed to replace a couple of keel bolts.

“We're fine, but there is much work to do,” said Fa. “We had a good dinner and we will relax a little. Tomorrow we lift the boat out of the water to change the keel bolts, but basically things go as we expected “

Unscheduled and unwanted their pit stop may be but Colman, is delighted to be briefly in his home country: “To come into a dairy (deli) and see the familiar sights and sounds, to see magazines and chocolates of my childhood it is fantastic to be back in New Zealand.  I have never been here, and it is funny to have to sail half way around the world to discover a new part of my own country, but it is great. We discovered the problems with the keelbolts after we decided to stop. We were chasing a couple of leaks and decided to re-torque the nuts on the keelbolts and unfortunately one have way in our hands. We were already heading in to New Zealand so that made us feel good about our stopover and also quite thankful.

“We are not shooting for the podium and Nandor and I, as since the beginning of the race, we have a long term vision of where we want to be with our careers, what we want from this race. I am trying to establish myself in my career and Nandor is counting every mile as a precious one. So he wants to do them all. So given that, we would be foolish to rush out of here and compromise for the sake of a few extra hours.

Renault Captur, from email: “Today, we’re back in the fifties. The albatrosses have found us again and are offering their support by flying over the boat, calmly without flapping their wings. Since we set off again, we have been focusing on getting around a low-pressure area blocking our path. Reaching in moderate winds, it all seems to be working out for the moment, and as the hours go by, we have made up a little of the time. We shall be sailing quite close to the centre of this low and beyond that, Renault Capture will be able to dive downwind chasing after the Water Brothers (We are Water) and their compatriots on One Planet one Ocean. Everything is fine on board and we are feeling fairly quiet in between trimming, navigating and looking at the weather. It isn’t that cold yet, so it’s fairly pleasant sailing for the time being. Well done to Jean and Bernard, who rounded Cape Horn some distance ahead making them well placed to achieve overall victory.”

Anna Corbella (ESP)  GAES Centros Auditivos: “I am excited about my second crossing of Cape Horn. I want to be there right now, and I think it is important, we want to begin to go north and point the bow in the direction of home that is something we have been looking forwards to for many days now.

“The conditions at the moment are that we are in a transition zone between two fronts, and at the moment we are sailing upwind with ten knots of wind with flat water, so it quite a strange situation  sailing towards Cape Horn right now, strange, but in a few hours it will change the NW wind will come again. And it will increase. I think we are going to cross the Cape in typical conditions – probably 30kts – and we are happy with that because it should be the last windy situation in the south and we are happy to sail these last days.”

Nandor Fa (HUN) Spirit of Hungary:“Our relationship gets deeper and deeper. On the one side we are a sailing partnership we are in one team and we think of ourselves as a team. In any aspect at all we help each other. On the human side there is respect also. I guess at the moment we are a better team than at the start. We have had surgery before (Colman had to put four stitches in Fa's head)…….I needed a bandage before and so that has been a good exercise for Conrad (jokes) but he is really talented to do it (stitch) like a sailmaker, making much nicer stitches in my head than a doctor.

“When we start again we will be pushing the boat, it will feel like racing, of course we will be a long way from the fleet, hopeless to think of catching up, but at least the performance is important to us and from that point of view we race against the most difficult rivals, ourselves and so we push to our limits, we should be satisfied and proud.”