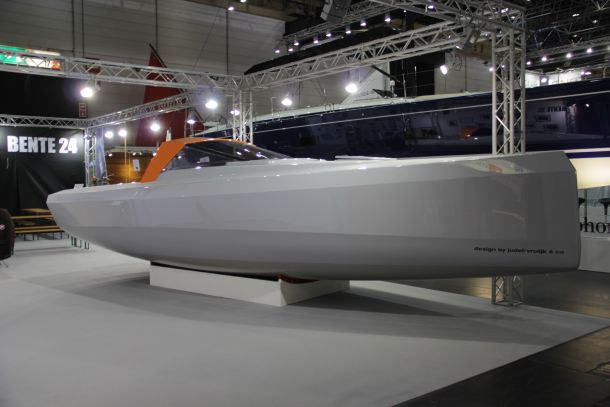 At first, it was more of a crackpot idea to develop a quick cruiser. Primarily, they wanted to create a boat with outstanding sailing values. So Bente is not constructed from inside for living comfort first, Bente is developed the other way around: first sailing, then living. With the backing of the famous Judel/Vrolik design team it should be a project to keep track.

It is a true collaborative effort, a bunch of articles on www.segelreporter.com, specialist feedback from a university, ideas from a Facebook group and a few boat shows later the company has finally built its first dream.

Early on in the process, by chance, they met round-the-world sailor and Professor Michael Adlkofer from the Hannover University of Design. He gave his 18 product design students the task to seek novel ideas for the boat. After the first presentation at the university, the initial plans were placed on the internet for open discussion and ideas.

After a couple of articles on www.segelreporter.com, on blogs and on its Facebook page, partners from the industry started to come forward to assist us with the project and to test innovations on Bente. As a result of this, the Bente project became a collaboration between students, Facebook friends, followers and supporters from the industry.

Consequently, several shipyards were interested in building the boat. One of the first followers on the internet was fascinated by the plan and became the builder of Bente.

At present the boat is being developed and in spring 2015 the first Bente 24 prototype will be sailing. From “maybe” to “Bente swims” in ten months. From small talk with a glass of bordeaux to the marriage between hull and deck on a shipyard.