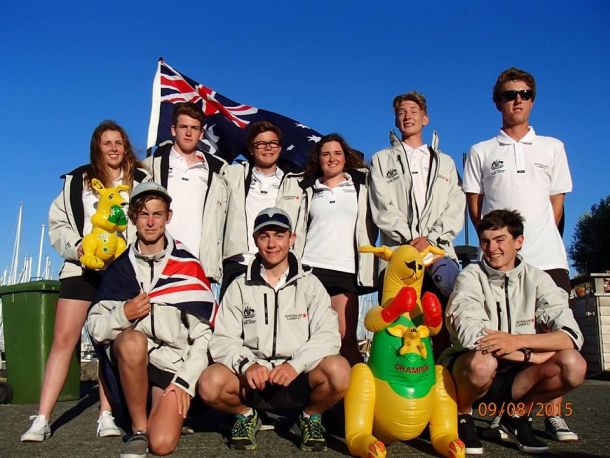 West Australian teenager Caelin Winchcombe has scored his second win of the Interntional Laser 4.7 youth world championship at Medimblik, The Netherlands, jumping from 10th to fifth overall in the massive fleet of 257 of boys from around the world.

Winchcombe is one of six boys and two girls representing Australia at the worlds, with Zoe Thomson also winning a race overnight, day two of the championships. But the Victorian sailor finished 50th in the next race!

Winchcombe has sailed a fine series so far, winning the opening race of his group and this with a 10th, a 3rd, 15th and then, overnight, his second win to giving him a net 14 points, only six behind the overall leader, Turkish sailor Omar Isik.

Zac Littlewood is second best Australian at 26th overall and 6th in the under 15 grouping. After finishing 32nd and 19th on day one he notched up an impressive 2-6-15 score on day two. In 28th place is Ethan McAullay who ended day two with a BFD in race 5 after placings of 35-32-7-11.

Race day was delayed for several hours due to lack of wind and finally got under way at 5pm in 5-8 knots. The sailors got off the water at 9pm.

“Sam (King) got a shocking start in both races (and one general recall) in a pack at the boat end, whilst the alert sailors had the pin end to themselves and clear air to get away whilst the pack dogs fought (among) themselves to the end of the fleet,” his father Roger King reported today.

“Josh had a blinder race in race one of the day, with a clear pin end start and clear air around the course. Unfortunately, Josh took a leaf out of the ‘how not to start’ manual handed to him by Sam and suffered the same consequence in race two.”