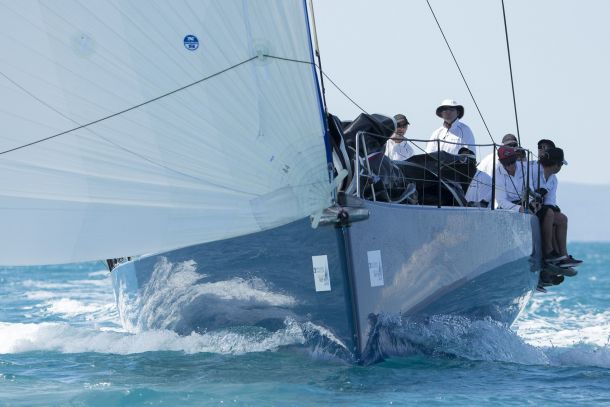 On a long and hard light air day for competitors at Airlie Beach Race Week, with a lot of waiting around for breeze, Matt Allen’s Ichi Ban ticked off another win to continue to lead IRC Racing Division 1, while Justin Close’s More Noise continues to lead Division 2.

Racing was delayed for over two hours as officials waited for the breeze to come, leaving competitors had to amuse themselves, yet stay mentally alert for when breeze did strike the course area at around 1pm as the sun beat down.

A weak 5 knot sea breeze trickled in and made it as far as 7 knots before petering to 2 to 3 knots, at which stage officials shortened to allow boats to get around the course before night time closed in.

Ichi Ban’s crew work was almost flawless again today, and OneSails Racing (Ray Roberts) could not keep up the pace as Ichi Ban put more distance between the two the further around the course they went and Allen’s TP52 beat the Farr 55 OneSails to the post by over four minutes.

As both share the same handicap, the end result was a win for Ichi Ban with Gordon Ketelbey’s Farr 40, Zen, second overall and OneSails Racing third. Ichi Ban leads the overall pointscore by three points, while Zen moves into second place and OneSails is third.

Ketelbey, from Sydney, is here preparing for the Farr 40 Worlds in Sydney next February. “Windward/leewards are too our liking and it was excellent practice for the Worlds,” he said tonight.

“I’ve done this event many times before with my Sydney 38 of the same name and I always find it enjoyable.”

Ketelbey is in second place at the moment, but if a protest by the OneSails Racing team against the Race Committee goes Ray Roberts' way, then Ketelbey knows he will drop to third overall.

“It’s a tricky one; Steve McConaghy is calling tactics on OneSails, and we have his girlfriend Narelle Barnes on our boa, so it could be an interesting night..,” Ketelbey said, leaving the rest of the sentence hanging in the air.

“Peter McNeill made us a new main and new jib for Airlie Beach Race Week and so far they’re doing a great job. We’re still learning to trim them, but I’m very happy with them.”

Of their third overall, Hickman cheekily said, “We’re not here to win – we’re here to let the other boats try and beat us.” This comes after a few adversaries have said the main aim is to beat the 2014 Rolex Sydney Hobart winner and multiple Blue Water champion.

‘Hicko’ and the crew were quite relaxed pre-racing. Crew member Antonia Fong was enjoying a swing from the sheets trailing the spinnaker, Hickman motoring backwards so Fong could get full value from it. They were also doing a bit of whale spotting.

With the tide on the run, many boats were over the line early in their individual starts today. Race officials were forced to call individual recalls, but the breeze was fading and it did not appear to make too much difference.

What it all boiled down to was a spectacular sight of 108 boats racing against the back drop of the Whitsundays, which provide some of the world’s most beautiful scenery – bushland with not a house in sight.

And just when you thought it could not get any better, whales and dolphins timed their playtime perfectly, appearing before the start and during the race.

Hosted by the Whitsunday Sailing Club, racing in the ‘Tropical Festival of Sailing’ continues on Wednesday from 11.00am, as tomorrow is lay day.