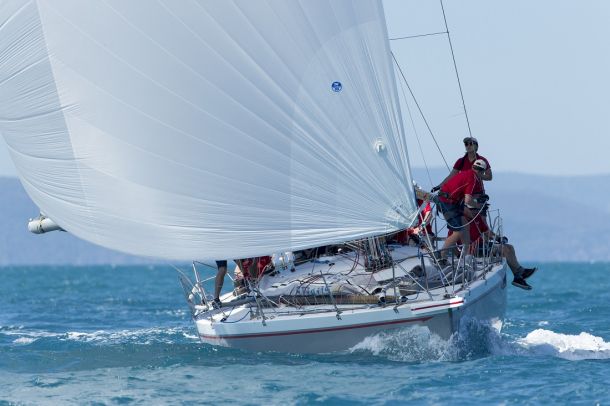 Matt Allen has continued his winning run at Airlie Beach Race Week, notching up another victory with Ichi Ban in Race 5 of the Whitsunday Sailing Club’s Tropical Festival of Sailing today.

Allen, who is gaining confidence in the TP52 he recently purchased, defeated Zen (Gordon Ketelbey) and OneSails Racing (Ray Roberts), to increase his lead to five points over Roberts’ Farr 55, which he beat by over five minutes on corrected time. Zen is currently holding down third place overall.

This afternoon, Allen described the race as “interesting.”

“I’ve been here a few times and we’ve never raced in that direction before,” he said of the north-westerly wind. “It was an ‘opposites’ day – we did the course back to front. You had to be open minded.”

“We got to practice our gybe techniques in light to moderate air going to White Rock, which was great practice,” said Allen, the president of Yachting Australia.

The Ichi Ban crew had enough in the bag by the time they rounded White Rock, where, Allen says, “We could dictate terms a little from there.”

At that stage of the course, with the IRC Racing leading the fleet, the light breeze increased, topping out at 16-17 knots as the boats passed Daydream Island and headed for the finish line back on Pioneer Bay.

“I guess we had breeze between 13 and 16 knots – conditions where we could almost start planning,” Allen said. “We saw the best of the breeze on Pioneer Bay – another superb day at Airlie Beach,” Allen said.

On Gordon Ketelbey’s Farr 40 Zen, Sean Kirkjian, the helmsman/afterguard related a couple of close calls during the day. Enjoying some one-on-one boat racing IRC Division 1 with Bob Steel’s new Quest throughout the regatta, Kirkjian said Zen arrived at the top mark to find Quest coming at them from the opposite direction.

“It was a close encounter of the first kind and I think they got an ever bigger surprise than we did, judging by the whites of their eyes,” Kirkjian said.

“Then we were running square along the shore heading for the reef under spinnaker when Gordon’s Ipad overheated. 'Where are we’, I asked, as I was worried we’d run out of water. ‘I don’t know’, was the response,” Kirkjian said.

“We got the youngest kid on the boat (23 year-old Bec) to fix it, and we were right again. It was a wonderful day’s sail though – 8 knots to start and it built to 16 and we’re in a beautiful location.”

Race Director Denis Thompson sent the fleet of on a course that took them from Pioneer Bay to the Molle Channel, around White Rock, to Daydream Island and the finish back on the Bay.

The fleet got away at five minute intervals from 11am in a light breeze, while the Multihull Racing Division was employed on a windward/leeward course.

All went well until Cruising Division 1 lined up for the start, and in the pile up at the pin, eight boats tried to squeeze into room for five.

The famous maxi, Condor, was right in the thick of it, and amid much yelling, they managed to start without incident. Remarkably, Bundaberg (David Kint) which was right at the pin, got through without leaving a mark on it.

As the bulk of the 108 boat fleet made its way through the Channel for White Rock, the breeze was on the increase and conditions were perfect. In IRC Racing Division 2, Peter Sorensen (The Philosopher’s Club) held the slightest advantage over Roger Hickman’s Wild Rose.

The two Sydney yachts, Sorensen’s of the modern variety, and Hickman’s 30 year old boat, match raced around the course, neither giving any quarter. At some point, Wild Rose overtook her adversary, but there was little in it when they came up to the final mark, with ‘Sorro’ keeping the pressure on ‘Hicko’.

In the end, Hickman pipped Sorensen by just 19 seconds, but more importantly, beat him once the handicaps were in place, with Hickman finishing second and Sorensen third to Jason Close (More Noise).

Close threw off the shackles of his eighth place in Monday’s light race and was back in top form, claiming his fourth win in the five races sailed to-date. The Victorian yachtsman’s Archambault 31 has proved a boon. Close arrived at Airlie Beach Race Week having no clue as to how his boat would fair against the stiff competition.

Meanwhile, two blasts from the past, Condor (David Molloy) and Helsal 3 (Rob Fisher) both built in the early eighties, sailed neck-and-neck under spinnaker as most of the yachts chose to hug the shore through the Channel.

Looking back to the huge flotilla behind was a spectacular sight of colour and blue water dappled by the sun. It was an unforgettable day’s sail for all.

Hosted by the Whitsunday Sailing Club, racing in the ‘Tropical Festival of Sailing’ continues tomorrow from 9.300am.