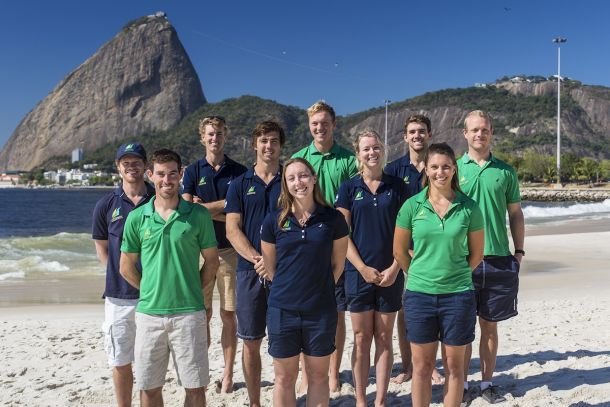 One year out from the largest sporting event in the world, the Australian Sailing Team is set to start racing at the second Olympic Sailing Test Event to be held on Guanabara Bay, Rio de Janeiro, Brazil from 15-22 August.

339 sailors from 52 nations have arrived in Rio for the Aquece Rio (Warm-up) – International Sailing Regatta 2015 with racing starting on Saturday, 15 August.

The Aquece Rio International Regatta is the second official Test Event for the sport of sailing and will see ten Australian sailors, including four London 2012 Olympic medallists, compete against their international rivals in six of the ten Olympic classes in what is a key dress rehearsal at the 2016 sailing venue.

The Olympic sailing program comprises ten boat classes and last year the Australian Sailing Team secured national qualification for all but three of the nine Olympic classes Australia is expecting to qualify for the 2016 Rio Olympic Games. The selection period for Australian Sailors to compete at the 2016 Olympic Games continues until May 2016.

At the Rio Test Event, Australian Sailing will be represented in all of the six of these boat classes that are already qualified with the following sailors representing Australia:

Racing is scheduled to commence at 13:00 local time on Saturday 15 August (Laser) with racing concluding on Saturday 22 August. Medal Races in the Laser, 49er, 49erFX and Nacra17 are scheduled for Friday, 21 August with Medal Races for the Men’s 470 and Finn classes to follow Saturday, 22 August.

London gold medallists Nathan Outteridge (NSW) and Iain Jensen (NSW) were one of four crews who won the London test event in 2011 before claiming gold at the 2012 Games and will be looking to set a similar precedent in Rio even though the pair has had a mixed year so far.

After a silver medal at the ISAF Sailing World Cup in Hyères, France, followed by a couple of results off the podium, including a fourth place at the 49er/FX Open European Championships most recently, the pair is looking forward to build on their performance at the Test Event.

They are managing their Olympic preparation with another America’s Cup campaign with their Artemis team but have made their intentions clear on defending their Olympic Gold medal in Rio as well as topping last year’s test event result where they finished second:

“We’ve arrived here ten days ago and it’s been good,” Iain Jensen said. “It’s always been the plan to win Gold in Rio this time next year and we’ll be trying to win this event, which would be a big step forward in trying to get one away from the New Zealand guys.”

“We came away from the Europeans with a few things to work on and the training here has been really good for us. We’ve been focussing on those areas and have been taking some steps forward and hopefully that will reflect when the regatta comes around (Sunday).”

Both the 49er and 49erFX will feature 20 boats at Rio 2016 and with 20 boats on the test event start line conditions will be simulating a Games time competition environment.

London 2012 Gold Medallist and five-time World Champion Mathew Belcher together with dual World Champion crew Will Ryan are the current World #1 and have been on the podium at every event they have competed at since they started sailing together at the end of 2012.

They qualified the boat class by winning the World Championships in September 2014 and have had two wins on Rio waters already after winning last year’s test event as well as the Copa Brasil de Vela in December.

The Rio test event comes after the recent third place at the 470 Open European Championships and following three consecutive second places at the previous three World Cups, all behind different winners. The 2015 test event will mark an important step in the pair’s preparation as Will Ryan explains:

“We’ve been here a few times now and preparations for the Test Event have been going well. We completed last week’s South American Championships as a warm-up event in second place and every time we are here, we make sure it’s a valuable time. We’re inside of one year to go and we have to make sure that each day we’re finalising those things we need to work on and it’s about gaining as much experience as we can.”

“We’re happy with where we are at and looking forward to getting into some racing this week. There’s been a lot of controversy about the water and water pollution, but it’s something we can’t control. It would be great if they fixed up but we got to go out there and do what we do. Having said that, the water is warmer than in Europe so I can’t complain.”

After winning the Test Event in 2014 Burton is enjoying being back on Rio Waters:

“Last year I won the Test Event and I will be trying to repeat that and win again this year. We had a test regatta last week, which I won as well and it’s been good conditions for me here in Rio, so hopefully it all goes well next week.

I’ve been here for nearly a month and it’s my third time here. The biggest difference this year is that it will only be one boat per country and to not to have other team mates out there. Everyone seems to be a little bit more serious this time around and keeps to themselves a bit more. I haven’t had this before and from that aspect, it will make for an interesting week.”

“The weather has been great, the beaches are good and other than the launching area, the water hasn’t been too bad.”

Australia’s second ranked Laser sailor and World #2 Matthew Wearn (WA), who finished fifth at the World Champs, trained with Tom in Rio in the lead up into the regatta, but will not compete as only one competitor from each nation is permitted to race. But Tom Burton appreciates the advantages of having a training partner with him:

“Matt (Wearn) has been here with me for the whole month and we’ve been training a lot together. He’s one of the quickest in the world so it’s been good and we can just go out there sailing together and if one of us is having a bad day the other can really touch him up. It keeps us both on our toes and it’s good to chat with someone in debriefs and in day-to-day life who speaks your language.”

Cousins Jason Waterhouse (NSW) and Lisa Darmanin (NSW) have been topping the Australian rankings over the past few events in the Nacra 17 and are representing Australia at the Rio Test Event as a consequence.

And after two weeks of training at the venue they are keen for racing to start as Lisa Darmanin says:

“We’ve been in Rio for about a month testing the Olympic waters together with our training partners Bundy (Darren Bundock) and Nina (Curtis), racing on all the different race courses and checking out how tricky it is out there. Our racing starts on Sunday and we’re really excited to get out there and racing.”

“We are really proud of our second place at the Worlds and are chipping away every day to improve. We’re racing well at the moment, making smart decisions and we’re sailing fast, so we obviously want to be on the podium and it would be great to be on top at this event.”

“The sailing conditions are tricky, but they are good. It’s nice, it’s challenging and offshore is just incredible with big waves, good sea breezes and being from Sydney Harbour I can’t complain.”

The pair most recently won the silver medal at the Nacra 17 World Championships at the beginning of July and took home the win at the ISAF Sailing World Cup in Weymouth and Portland in June. They are currently ranked No.1 on the ISAF World rankings and qualified the boat class, which will premier in 2016, by winning bronze at the 2014 ISAF Sailing World Championships in Santander.

It is the first time on Rio waters for Jake Lilley (QLD) and after settling in, he is looking forward to the racing on Olympic waters:

“It’s pretty special to be here and everyone is excited to have the Olympics in Rio de Janeiro. It’s a fantastic place for it and next year should be something special.”

“It’s my first time here and at first, it was a bit of culture shock for me. Everything is a bit different in South America and different to the places in Europe and Australia where we spend a lot of time. But our team is so well prepared and we are so well set up here that you feel comfortable and at home quickly and I think that’s important when it comes to going out on the water and getting the job done,” Jake Lilley said about his first time in Brazil.

And about the conditions he added: “You have to be a well-rounded sailor to sail here. It’s perfect and it’s going to highlight a lot of different conditions and in the end the best sailor is going to come out on top, so it’s perfect for an Olympic regatta.”

Lilley is the up-and-coming Finn Sailor on the Australian Sailing Squad and secured the Test Event spot after convincing performances, including qualifying the boat at last year’s World Championships, a bronze medal at the ISAF Sailing World Cup in Miami in January, eighth at the Finn European Championships, as well as sixth place at the recent ISAF Sailing World Cup in Weymouth and Portland in June. 21-year old Lilley joined the class in 2013 and is one of its fastest improvers.

With Jaime Ryan’s Women’s 470 skipper Carrie Smith recovering from surgery, Price and Ryan have teamed up to sail this event together in order to gain valuable experience on the Rio waters.

“We’ve been here for two and half weeks, have been sailing lots and have been enjoying it so far. Jaime and I have been sailing now around 20 times together and have actually sailed more here than we did in Sydney beforehand. It’s been really good for us and with really tricky conditions we’re switched on the whole time,” Olivia Price said.

“We’ve been sailing on a lot of courses, even ventured outside which was pretty interesting with 28knts gusts. We’ve explored all the courses inside, especially the Naval course, which has some tricky stuff going on with the tide and we’re just trying to get as much information as we can about the place and are looking forward to the racing.”

“It’s been a little while for me since I last race, so it’s awesome to be here and to be in touch with the fleet again and to see how everything is going.”

The Aquece Rio – International Sailing Regatta runs from 15 – 22 August and will be based at Marina da Gloria on Rio’s inner harbour. The Test Event allows the International Sailing Federation (ISAF) to evaluate and make key decisions in advance of making the final decisions that will govern the Rio 2016 Olympic Sailing Competition.

The Rio Test Event regatta is based on the same format and schedule for racing that will be used one year on at the Rio Olympic Games with ISAF regulations permitting countries only one entrant per nation.

Australia will be represented at the Rio Sailing Test Event in six events: