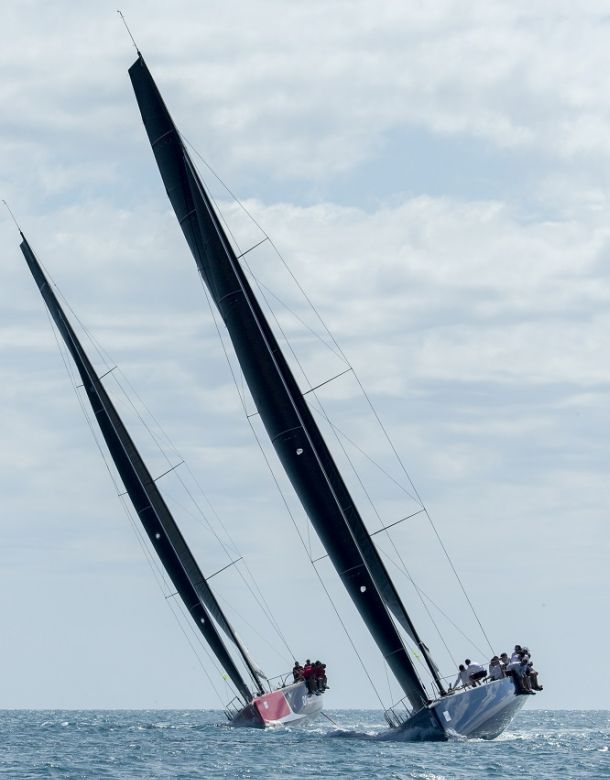 Matt Allen pulled off his fourth straight win at Airlie Beach Race Week today to consolidate his lead in in IRC Racing Division 1, after a long day on the water, with racing starting at 9.30am this morning in 20-25 knot winds with big gusts.

Only one more race remains to be sailed at the Whitsunday Sailing Club’s popular annual regatta, and Allen is in an almost unbeatable situation with Ray Roberts’ Farr 55, OneSails Racing, four points in arrears after finishing the maiden again today.

OneSails moved back up into second place yesterday following a protest against the race committee in regards to Race 4, which resulted in Zen, Quest, The Goat and Hartbreaker being scored TLE (Time Limit Expired).

Ichi Ban, a TP52, and OneSails Racing share the same handicap, and although Roberts won the opening race, he hasn’t been able to get a look in since, with Ichi Ban getting faster by the day. In today’s race, which took Ichi Ban 4 hours 23 minutes and 36 seconds to complete, Roberts trailed by two minutes.

More Noise (Jason Close) in IRC Racing 2 and Trumpcard (Blake Boulton) and Belle (Doug Painter) both in IRC Passage, were given redress for going to the assistance of Cool Change, Bob Critchley’s multihull which capsized on the course today.

The redress keeps More Noise in the lead of Division 2, as it had already won four out of five races, placing the Archambault 31 just over seven points in front of its nearest rival, Roger Hickman’s Wild Rose.

Wild Rose, a 30 year-old Farr 43, has been in a tight tussle with the more modern Sydney 36 Cruiser/Racer, The Philosopher’s Club (Peter Sorensen), throughout the event. Following today’s win, Sorensen is now in third place overall, just one point behind Wild Rose, which finished second today.

“What a fantastic race,” Sorensen said this afternoon. “It was 22 knots going up the beat and big seas, making it a tactically difficult race, but my boat loves those sorts of conditions. By the time we were running for home, the seas had flattened out, so life was easier.”

‘Sorro’ said it has been a tough week trying to beat both More Noise and Wild Rose.

“Finally a win, I can’t believe it. More Noise keeps winning and there is never more than 200 metres between us and Wild Rose – every day we have a battle with them – I wish they’d go away,” the champion Sydney yachtsman said with a grin.

“I thought they had us, but they couldn’t get their (spinnaker) pole down at the last bottom mark and we took advantage from a slight left hand shift,” Sorensen finished.

Jason Close was disappointed not to be able to continue in the race which took the boats from Pioneer Bay to Dent Passage, the Molles, to Whitsunday Passage and home, as the heavier 20-25 knot winds that gusted to 30 knots, were right up his alley.

Instead, Close stood by a fellow competitor, the multihull Cool Change (Bob Critchley) which capsized at North Molle. “It wasn’t a choice, that is what you do in sailing,” Close said.

Graham Sherring, the owner/skipper of Stay Tuned, made good his promise at Airlie Beach Race Week today, when the Sports Boats contested four windward/leeward courses and the Queenslander moved to within one point of the lead with a day of racing remaining.

Vivace led the Series going into the day, while Stay Tuned was sitting in third. Sherring sailed his Leech 650 to 3-1-2-1 results, which leaves him in second place overall and one point adrift of Vivace, which was favoured to win the event coming in and posted 1-4-1-2 results today.

With a scorecard showing he has not strayed outside the top three, John Williams and his Tyee III look to have the Multihull Passage title stitched up. Tyee III is four points clear of his nearest rivals – three of them are tied on 14 points apiece.

With just one day remaining, tomorrow’s final race will decide the fate of Fiona Kermeen’s Mon Amie, Richard Jenkins’ Kestrel and David Davenport’s Misty Sea, which won today’s Race 5. One will miss a podium place in this hotly contested class.

Hosted by the Whitsunday Sailing Club, racing at the ‘Tropical Festival of Sailing’ comes to a close tomorrow.