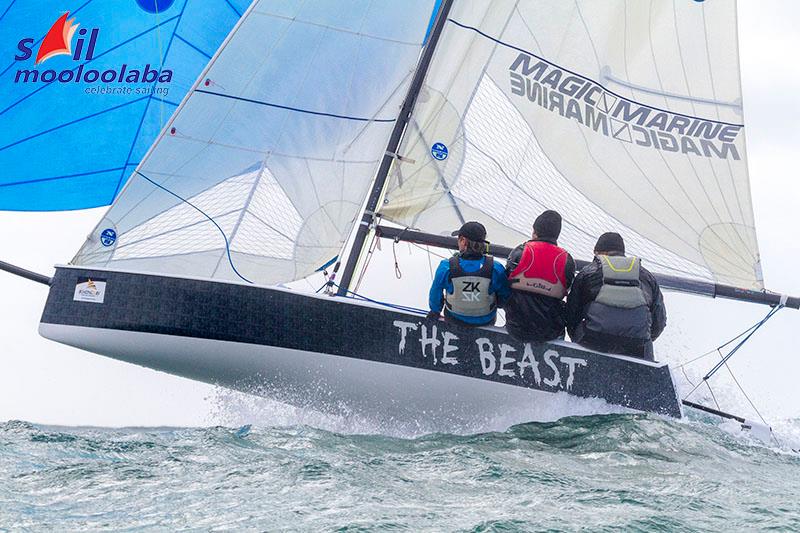 17/03/2016
For the first time, a VX One fleet of eleven boats will be mixing it up with its larger brethren out on the turquoise waters of the British Virgin Islands in the 45th edition of the BVI Spring Regatta and Sailing Festival.
The VX One is a relatively new one-design sport boat that's gained much popularity in the past few years. Sailors from around the globe, including Australia, Canada, St. Croix and the USA, have teamed up to form the first VX One fleet to race the Caribbean Cup March 25-27 at St. Thomas and April 1-3 in the BVI Spring Regatta; an exciting new addition to both events which brings new competitors into the mix.
Toro Goodrich and his crewmember, Manuel Gutierrez, grew up together in St. Croix and are looking forward to returning to the Caribbean to race Spring Regatta for the first time: “Doing the STIR and Spring Regatta is a (sailing) bucket list. Being able to charter a VX One with my best friend made the decision to join both events this year that much easier,” Goodrich said.
He thinks the VX One is a great one design boat for the Caribbean, with its modern design and fairly simple controls, small crew requirements, and ease to dry sail. “The asymmetrical spinnaker helps create fun downwind tactics, it's a fun, simple, fast and exciting boat to sail,” Goodrich added.
Michael James, from Brisbane, Australia, is also heading into his first Spring Regatta. He's owned a VX One for almost two years and was inspired to travel to the BVI to meet up with other VX One owners and to race with the VX One fleet in its inaugural Caribbean cup during the BVI Spring Regatta.
“There are very good sailors in VX One fleet, I think it will be a tough regatta to place in,” James said. “It's a great Caribbean race-boat because it's fast, simple and fun. Did I mention FAST?”
Tim Pitts, organizer for the Class and Class VP, said: “To date we have 11 boats signed up and I think the competition will be stiff, with the Aussies being the boats to beat.”
Pitts has been racing his VX One for four years and loves the fact that the boat is inexpensive to move around and can be sailed with just 2- 3 people. “We can send six boats from the US to the Caribbean for the cost of going to Florida from Newport!”
This will be Pitts' 9th Spring Regatta and he's looking forward this time to being on board the VX One:
“It's a great boat to show off and amazing boat for the Caribbean. I'm looking forward to sailing hard and owning my rum and coke every day!”
The inclusion of the VX One sport boat fleet was facilitated when BVI Spring Regatta combined efforts with St. Thomas and the STIR Regatta, providing a unique racing opportunity for sailors to race two International regattas over ten days.
Judy Petz, Regatta Director, said: “It's exciting that 11 of these boats will be shipped from Miami to the Caribbean for these two events which lead off in just a week. We hope this will become an annual event and a fantastic opportunity for other One Design classes to join in the competition.
Registration for this year's event kicks off at noon on Monday March 28, with the Opening Party at 6pm. Tuesday March 29th brings on the Nanny Cay Challenge, a 31-nautical mile jaunt around Tortola for the Nanny Cay Cup and challenge for the fastest mono and catamaran record around the island,with the Scrub Island Invitational the following day setting the stage for a competitive and challenging week of racing in the spectacular waters of the BVI.