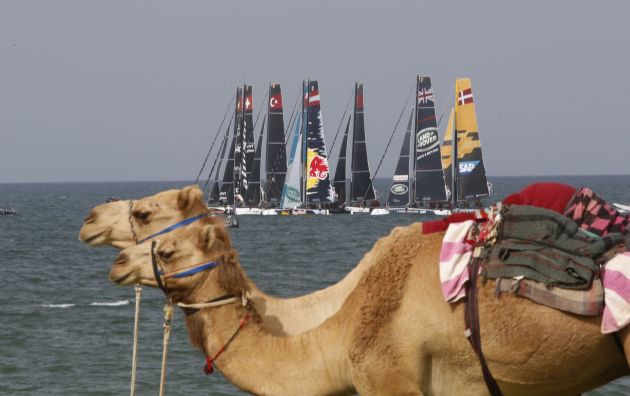 Under the beaming Arabian sun, things heated up on the Muscat racecourse for the eight hydro-foiling GC32 catamarans competing at the new-look Extreme Sailing Series today, as the local boys on Oman Air extended their lead.

It was a day of two halves, which saw the helmet-clad crews head out to the track in 18-knots of breeze, their GC32s skimming at high speed across the water, before an 180-degree wind shift shut things down.

Three fast-paced races were sailed, and like magnificent men on their flying machine, Morgan Larson and his crew, which includes three former Extreme Sailing Series champions, took victory in two races, giving Oman Air a 14-point lead at the halfway stage of the event.

The only team to challenge the locals was the Danish SAP Extreme Sailing Team, who took spoils in the day’s opening race, with the duo of Jes Gram-Hansen and Rasmus Køstner out to make their mark early on in the season. “We’ve put a lot of work in trying to prepare ourselves for racing the boat, and now it’s all about racing”, commented Køstner. “It’s really rewarding as a sailor to jump on a new boat and feel like you’re improving. We still have a long way to go, but it feels like we are getting better every day.”

The double-Olympic gold medallists from Austria on Red Bull Sailing Team, this year with a new-look crew having recruited ex-SAP Extreme Sailing Team crewman Brad Farrand, got better and better as the day went on, posting a fourth, third and second, to finish the day third overall. Skipper Hagara commented: “The conditions were difficult today and it wasn’t easy out on the racecourse, but we managed to make it work for us. Overall it felt good, especially when we are foiling -when these GC32s rise off the water, they’re spectacular to watch.”

Tied on points in fourth and fifth place are Land Rover BAR Academy and Alinghi – the Swiss America’s Cup and former Extreme Sailing Series champions who were always in the top half of the fleet, showing an improvement in consistency. Co-skipper Arnaud Psarofaghis, a foiling Moth and multihull expert, commented: “Yesterday was a tough start for us, but today we were on our game and we are a lot happier with the result. We changed our communication onboard, especially on the starts, and we could see the progress. Although we have experience on the GC32, we can already see the other teams starting to get to grips with it, so we need to ensure we keep improving.”

There were mixed fortunes for Team Turx today, with a broken winch in the third race leaving them out of the running. In contrast CHINA One finished the day on a high, taking third place in the closing race, putting them eight-points ahead of Sail Portugal.

Tomorrow, (Friday 17 March) the action will be available for fans around the world to watch live on the official event website from 1600GMT+4, before Saturday’s final races are broadcast internationally with the Series’ broadcast partners around the globe.