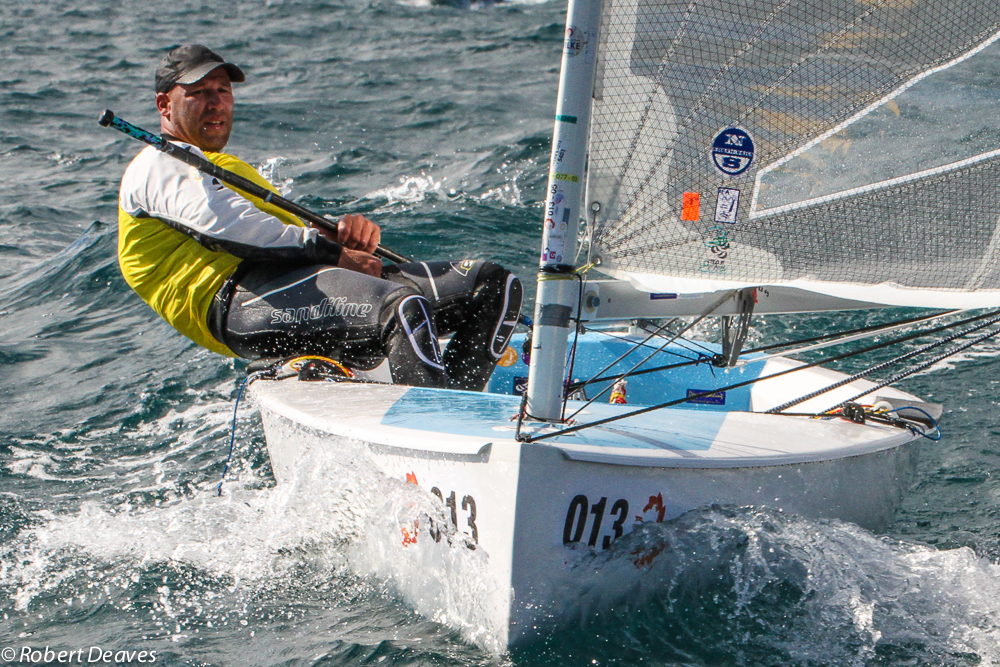 Milan Vujasinovic (CRO) capitalised on his first day victory at the Finn European Championship today with two great races to extend his lead to eight points after two more races. Josh Junior (NZL) is up to second with Zsombor Berecz (HUN) in third. Race wins went to Pieter-Jan Postma (NED) and Junior in what turned out to be a windier day than expected.

The day started with another delay to wait for the wind, but when it started filing in it kept building to 13-15 knots during the day for some great, if shifty, racing in the waters off Barcelona, which combined with a huge swell, made for an interesting day.

Postma stole the first race after moving into the lead on the last wave before the final mark. Filippo Baldassari (ITA) had led the entire race, rounding the top mark from Henry Sprague (USA) and Tom Ramshaw (CAN). On his bottom mark move Postma said, “There's always a plan. Filippo was on the right and Caleb [Paine (USA)] was on the left so I pushed Filippo a little bit up and he was gone and then I made a move to go to the left of Caleb, so he gybed, and then I caught a wave and I passed. It was nice, very satisfying.”

“It was a good racing. I was very happy with the starts, but still you have to be really open. Everything can happen here. It is tight racing and it's shifty. Sometimes it was shifting 20-30 degrees and there's win, lose, win, lose going on all the time”

The second race was owned by Junior whose exceptional offwind speed in these conditions gave him the lead on the first downwind. “It was a really epic day and nice to win one. I just had a good start, sailed up the middle of the course, rounded the top mark in the top 10 and I was going really quick downwind so managed to get up to first and held on from there.”

“Today ended up being an awesome sailing breeze. We had 12 to 14 knots and the waves got up really big and choppy so it was fun downwind.”

Vujasinovic had led round the top mark from Paine, but got passed downwind, while Paine capsized in the increasingly challenging conditions. Zach Railey (USA) was second at the gate behind Junior, but ended up third after gioing wide down the final run and letting Vujasinovic through for second.

Paine and Railey are engrossed in their final Olympic selection trials here. Paine had the better day to claw back some advantage after a disastrous day on Monday. “I had a much better day. In the first race I had a nice little lefty but on the downwind I messed up the gybe with PJ, but second place is still good.”

“I was able to see a couple of shifts that helped me out in the first race and the second was basically just pure boat speed, but unfortunately I flipped at the top while in second, so I dropped a little bit, but all in all a better day that the day before.”

On his Olympic dream “Going to the Olympics has been a great passion of mine and this is just one step to get me to that goal. It's something I have been doing for the past six years and I have dedicated my life to winning at medal at the Games and this is one more step to what it takes to get there and do that.”

In contrast, Junior added, “This isn't one of our selection regattas, but I think every regatta counts, as if you can do well at regattas it looks good. Hyeres is our final selection and after that they make a decision. I wasn't happy with the Gold Cup, so hopefully I can improve here and get a top 10 or a little bit better. I think tomorrow it's going to go offshore so could be a completely different day.”

In the Juniors there is no change in the order but Ondrej Teply (CZE) is building a useful lead in 18th from Facundo Olezza (ARG) in 30th and Arkadiy Kistanov in 36th.

The championship is still one race behind schedule. Racing continues Wednesday,