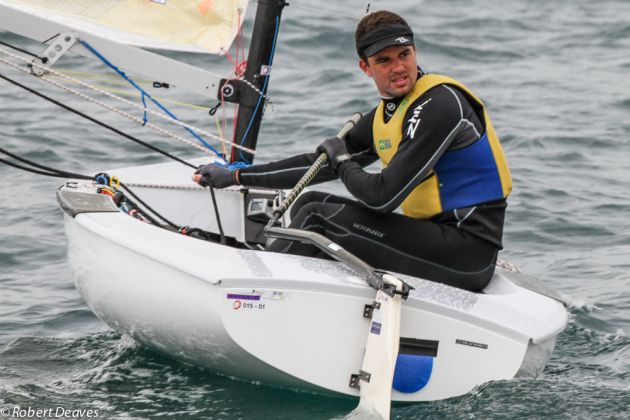 Ben Cornish (GBR) won the only race possible on the third day at the Open Finn Europeans in Barcelona, steeling the win from the race leader from the first mark, Jorge Zarif (BRA). With many of the leaders having a bad day, Zsombor Berecz (HUN) is up to second overall and Pieter-Jan Postma (NED) is up to third.

The forecasts for today were as varied as the flip of a coin, with a range of strengths and directions on the cards. It was also a bitterly cold day with a light rain soon after the fleet launched at 12.00. The strength and direction of the wind caused problems starting a race and the one that did get away suffered from many shifts, the first one being pretty damaging to those at the boat end of the line.

Zarif led at the top from Cornish and Postma and looked to have the race sealed up, building a nice lead. There was no change at the gate or the second top mark, but on the final downwind, Zarif and Cornish split gybes and when they came back together the Brazilian's lead had vanished.

Cornish said, “We had a really close battle. We split at the top and half way down we came back together and it was neck and neck all the way to the bottom. I just managed to push for the left hand side to get the overlap coming into the mark, which seemed to put me in the right place to get ahead.”

“It was a really hard day, with massive shifts coming off the shore and quite a lot of pin bias. The key was working out what would be best. As it turned out the pin bias put the people on the left ahead when the shift came back in and then it was a case of sailing the shifts up the middle of the course and trying to get in front of the people behind you.”

Cornish moves up to fourth overall. “It's still pretty early in the event. I'll just play it day by day and see how it ends. It looks like it is going to be tricky for the rest of the week, that's for sure. Today was supposed to be one of the more hopeful days for the breeze. We just have to hope it gets warm and we get a sea breeze.”

Second overall Berecz is one of the few consistent sailors so far this week. “I think it's just self-discipline. I did not go after the others to win the race, holding on to fourth place across the line was enough for me.”

“I had a bad start, so I had to get myself out of there, but I then found a very good line, and I just kept my position from there sailed with the others.”

Junior reflected on his race, “It was a really tough race. Just after the start the breeze shifted left, probably about 20 degrees. Luckily I was down near the pin and managed to tack over get away. So I am pretty happy to get a fifth out of that because it was a day you could easily come away with a 40th or 50th, as some of the guys did. I may be in the lead for now, but we are only four races in, and another six to go before the medal race. We'll see how it all stands then.”

Ondrej Teply (CZE) consolidated his lead in the Junior championship, though he said he was not happy how he was sailing so far. “So far this regatta is not going so well for me. OK, I am winning the Juniors but my results are nothing special and the conditions here are not so easy, especially for juniors because it is quite shifty and tricky and the more experienced sailors are getting an advantage from this.”

“Today's racing was super shifty and very cold. It was not a very nice day for sailing. Usually I try and stay in the middle but it's not a good strategy here because always the sides are paying. Today after the start I was on the right side and it came from the left and I couldn't cross and I got to the first mark about 60th, so then it's difficult to catch up.”

Behind Teply, the defending champion Arkadiy Kistanov (RUS) has moved up to second with Phillip Kasueske (GER) in third.

Racing continues Thursday, but now the championship is two races behind schedule. One more race is needed to be able to get a discard and to sail the medal race. After many sailors have discarded today's race result, the landscape could change significantly.