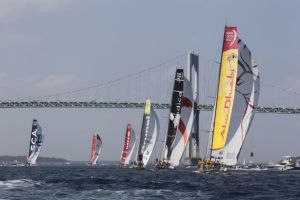 ALICANTE, Spain, February 4 – At a time when rival global sports events are struggling to contain spiralling costs, a report by independent auditors PricewaterhouseCoopers (PwC) has praised sailing’s premier round-the-world event, the Volvo Ocean Race, for halving the price of competing for sponsors.

Much of the credit for this has been ascribed by report author, Manuel Díaz, to The Boatyard, the shared-maintenance facility introduced by the race for the last edition in 2014-15.

“A campaign now costs around 50 per cent less to run – in the last editions, the cost was between €20-35 million rather than €10-15 million for campaigns at the same level,” the report, Assessment of the Maintenance Operating Model, says.

The Boatyard has broken new ground in the offshore racing industry, pooling both human and equipment resources for the servicing of a newly-introduced class of boat. The Farr-designed Volvo Ocean 65 one-design broke with 40 years of tradition in an event, which was launched in 1973 as the Whitbread Round the World Race.

The report, which was commissioned by the race after the finish of the 12th edition in June last year, highlighted: “The list of benefits is no longer hypothetical: the model has already been implemented, showing an excellent performance and outstanding results.”

The report, in particular, praises:

It added: “One of the main benefits of The Boatyard is that it has become easier to attract both participants and sponsors – the entry barrier is lower but is not only a matter of cost.

“As all the teams have the exact same platform, the risk of having a much slower boat is lower. On the other hand, safety has been at the heart of the one-design process, with the boats designed to last at least two editions of the toughest race on earth.”

Díaz recommends that The Boatyard could be even more effective with a stepped-up level of performance monitoring through a list of key indicators such as average time for repair, man power utilisation and efficiency and inventory turnover.

Nick Bice, who manages The Boatyard, was delighted the project had won the positive comments from the PwC report.

“What pleases me is that it’s recognised now that our standards are in line with the very highest in the automotive and aeronautical industries,” he said. “A key statistic that has been highlighted is that 90 per cent-plus of our servicing was proactive, in other words fixing potential problems before they led to breakdowns. Only around 10 per cent of that work was reactive.

“Our ambition is now simple: we are aiming to get to a stage where there is no excuse for breakages in the next race other than those caused by human error. We don’t want future stories to be about why a boat has broken down, we want the stories to be about the people sailing onboard.”