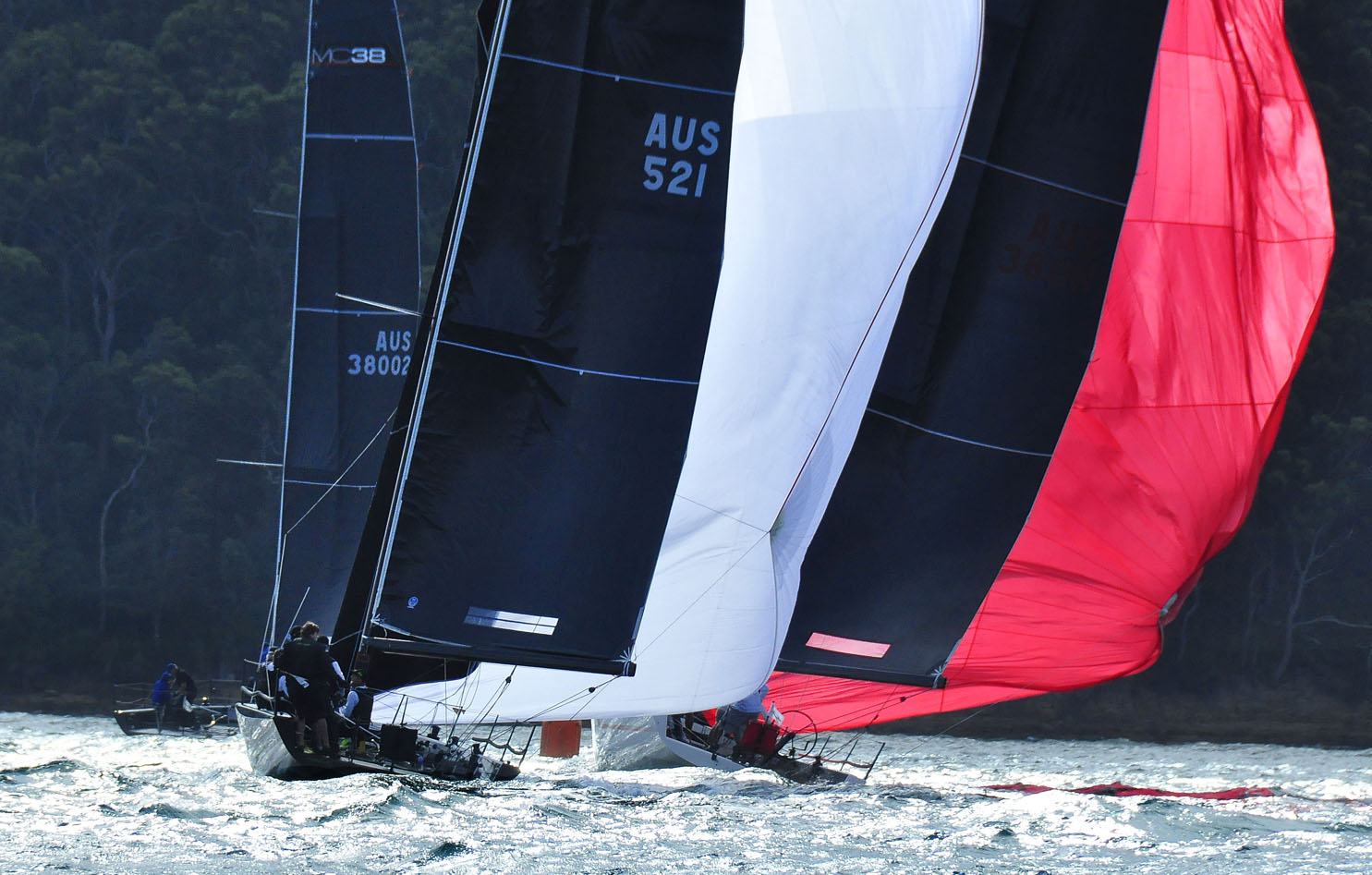 The MC38 owner/driver who best hung onto the tiller and the crew that kept the boat on its feet in the screaming downwind rides survived and outshone the fleet on an action-packed day one of the class’ Australian Championship.

During the first upwind work following the 1230hrs start of race one, Assassin crewman Tom Brewer lost the tip of his pinkie finger in an accident and was immediately taken off the boat by RIB to a waiting ambulance.

In race two a cruising boat found itself dangerously mixed in with the tightly-packed fleet at the top gate, with nowhere to go but with them around the mark. The small crew on board surely learnt a few new choice words.

While trying to avoid a collision amid the chaos, Chris Hancock’s Vino clipped the gate mark which then wrapped around their keel. In the same race Ginger’s crewman Peter Bourke suffered a broken finger and was taken ashore once the boat crossed the finish line.

At that point a postponement was called and the fleet sheltered in Morning Bay from the winds, 20-25 knots out of the sou’east gusting up to 27 and whitecaps right across Pittwater, waiting to see if the breeze would abate. Consistently high live readings at Sydney Airport to the south and the day’s dramas were prudent reasons for Royal Prince Alfred Yacht Club PRO Steve Merrington to call it a day.

New Zealand MC38 Menace (Royal Akarana Yacht Club) was boat of the day, tactician Will Tiller and skipper Howard Spencer’s team turning an OCS (On Course Side = breaking the start) in race one into an epic comeback and win. Tiller’s on the crew list in place of regular Ray Davies who had work commitments this weekend.

“We had good pace in that race, it came down to the boat-handling at that top end of the wind range,” Tiller said. “Howard did a nice job on the first down-winder and kept the boat upright to make us some big gains. We got the split at the bottom gate and used our wheels from there. I have no idea of our top speed today, we were too flat out. They are busy boats!”

Marcus Blackmore’s Hooligan (RPAYC) scored the race two bullet, their first since the class’ national title last April on Pittwater. Tactician Adam Beashel reckoned the day was won and lost on the downwind runs. “It was whoever who kept their boat on its feet, and we managed to do that.  We wouldn’t have had the top speed but we stayed upright and moving in the right direction. It was a tricky day.”

Blackmore was delighted with Hooligan’s opening scores of third and first, and though he and the crew were on form and keen to continue after two races, they supported the PRO’s decision. “Once it gets to consistent 25 knots you are hanging on the edge, and a couple of people hurt isn’t good,” Blackmore said.

Today was a poignant reminder of a lesson super-coach Mike Fletcher once shared with him.  “I remember years ago Mike telling me ‘when you race one design and all the boats are the same and one boat finishes so far in front of the others, in the end it’s he who makes the least mistakes wins’. We made mistakes today and I bet the guys who finished in front of us made less. It was a good day for the class,” Blackmore added.

Hooligan is second overall to Menace by a point and a point off them is Leslie Green’s Ginger (CYCA), trying to piece together a trifecta championship win and tonight interviewing for a replacement to fill Bourke’s spot.

Clare Crawford and her Assassin team had repairs to make this afternoon, and they weren’t the only ones. Multiple bowmen were hoisted up MC38 masts at the RPAYC after racing, sorting out halyard issues.

Crawford’s first concern back on dry land was for Brewer, then reviewing the damage. “We had a few things go wrong, a lot of things are broken including the tiller,” Crawford said. “Despite what happened in the first race it was the first time this team has sailed together and actually we came out alright.” Not one to back away from a white-knuckle ride, she added: “I do like it when it’s fast, but maybe not that fast.”

The forecast for day two, Saturday February 6, is south-easterly winds 15-20 knots decreasing and Sunday is looking light, south to sou’east 10 knots. The usual Pittwater weekend traffic will be out tomorrow adding plenty more spice to the mix. Racing will start at 1100hrs rather than midday to capitalise on the breeze.