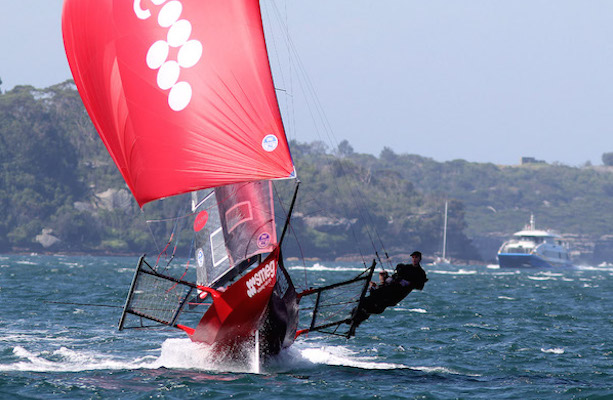 In fact, only three Australian 16 Footer champions have ever gone to win the JJ Giltinan 18ft Skiff Championship.

That may all be about to change at the 2016 JJ Giltinan 18ft Skiff Championship, sponsored by appliancesonline.com.su, which will be sailed on Sydney Harbour 13-21 February, when Lee Knapton skippers the highly fancied Smeg team skiff after recently winning the Australian 16 Footer Championship (Bryden’s Compensation Lawyers) at Hervey Bay in December.

Knapton and his 18ft Skiff sheet hand Ricky Bridge won their fourth consecutive Australian Championship (Lee now has won eight and Ricky five Australian 16 Footer titles) in December then returned to the 18s in January and were reunited with forward hand Mike McKensey.

The trio were superb throughout the Australian 18ft Skiff Championship and had already secured the title before going into the final race of the nationals last Sunday.

The Smeg team took delivery of their new Van Munster built hull only four months ago, but the crew worked tirelessly to prepare the skiff for the NSW Championship in November-December.

A few teething problems, due to a lack of preparation time, saw the Smeg team finish a credible third behind Thurlow Fisher Lawyers and Gotta Love It 7, but showed enough potential to suggest the JJ Giltinan and Australian titles were a definite possibility.

With the Nationals now already in the bag, all eyes will be on the Smeg team at the JJs and whether Lee Knapton will create history with a unique 16 Footer-18ft Skiff double.

Ricky said:  “We would be really proud if we become the first skipper-crew combination to win the Australian 16ft Skiff and JJ Giltinan 18ft Skiff Championship in the same season, but we are not getting ahead of ourselves”.

“This year’s racing is super close and competitive and there are some talented teams who are all capable of winning”.

Ï think this year’s JJs will come down to the team who is the most consistent across the ranges”.

“We are already proud that we have won both the 16s and 18s Nationals in the one season, and to do the big double would be a great achievement”.

“We are really pleased with how the season has progressed.  The support from Smeg and the Club in giving us a new kit has certainly played a big part in how we are performing on the water”.

Ït’s our secong year together and our crew work as a team is getting better each week”.

Regardless of whether Smeg wins the 2016 JJ Giltinan Championship, or not, much of the success will have to go to the efforts of Mike McKensey and Ricky Bridge.

Four years ago, Mike McKensey approached the Australian 18 Footers League about the management of an 18ft Skiff team, and together with Ricky Bridge has moved the campaign level to its present high standard.

Ricky encouraged his good friend Chris Nicholson to skipper Mojo Wine in the 2013-2014 Season, then last season was instrumental in engaging Lee Knapton as skipper.

Mike McKensey knows that to put a successful campaign together it needs more than just a quick boat:  “A boat campaign not only brings together a crew, it brings together our families and sponsors who support us every weekend.  This support is wonderful, both when we are on the water and when we come ashore.  Always cheering for us and congratulating us regardless of the final result”.

There is one certainty.  If the Smeg team wins the championship, the noise from the supporters will be deafening when the crew bring the skiff alongside the ferry to receive the blue ribbon.