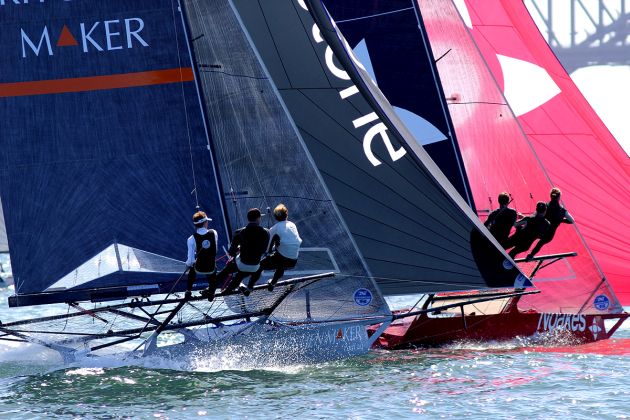 The Kitchen Maker struggles to get over the top of Noakesailing. Photo 18 Footers League.

Today’s Australian 18 Footer League’s President’s Trophy race was the final hit out for all teams prior to the start next Saturday of the 2016 JJ Giltinan 18ft Skiff Championship on Sydney Harbour and it also solved a problem for the Lumix team which was in need of a skipper for the regatta.

With Lumix’s regular skipper, Jono Whittey, sidelined for the season with injury, there have been a number of replacements used as fill-ins but getting the right man for the job wasn’t going to be easy. They have solved the problem after Daniel Phillips led the team to victory in a come-from-behind performance.

Phillips, a 2000 Olympian for Australia with Chris Nicholson in the 49er class, had planned on sailing with Howie Hamlin at the JJs. When Howie was forced out with an upcoming hospital procedure, Lumix were quick to grab him for today’s race and a possible JJ start. The win secured the position and Daniel Phillips is now officially the skipper of Lumix for the championship.

The fleet sailed the Easterly course in a 7-11-knot breeze which freshened over the final lap of the course.

Shortly after the start, the fleet split into two groups with Asko Appliances and Gotta Love It 7 leading the group on the left in Athol Bay while Mojo Wine (James Ward), Noakes Youth (Ash Rooklyn,) and Thurlow Fisher Lawyers (Michael Coxon) prominent in the middle.

As the leaders approached Shark Island, Gotta Love It 7 had edged ahead of Noakes Youth, with Asko Appliances third, followed by Thurlow Fisher Lawyers, Triple M and Mojo Wine.

When spinnakers were set after the fleet rounded the first set of windward marks, Gotta Love It 7 held a 10s lead over Asko Appliances and Noakes Youth, while Triple M and Mojo Wine lead the next group.

Asko Appliances grabbed the lead at the bottom mark and led the fleet over the next three legs of the course.

Both Marcus Ashley-Jones and Seve Jarvin elected to sail entirely different courses upwind but the pair were always close when they reached the rounding marks.

Gotta Love It 7 finally got the upper hand at the bottom mark on the second lap and it looked as though the team were going to score their first win for a couple of months.

After trailing well back in the fleet after a slow first lap, Lumix began to eat into the leading group’s margin and only took the lead just before the final rounding mark.

Race dates for the 2016 JJ Giltinan 18ft Skiff Championship, sponsored by appliancesonline.com.au, are:

(All races start at 3pm, except Race 1 and Race 6, which will both start at 4pm)

Anyone planning to follow the racing on the spectator ferry should make sure that they don’t leave it too late to buy their ticket each day or they may run the risk of missing out.