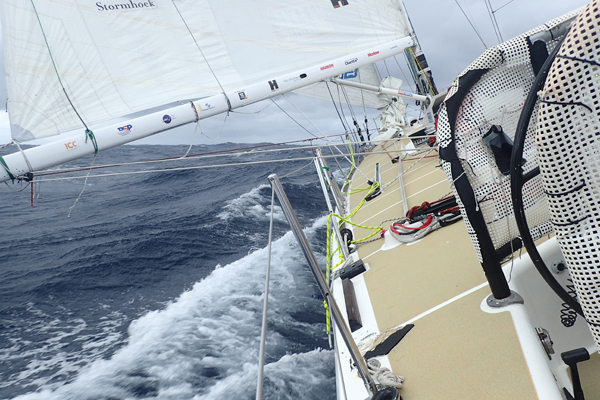 IchorCoal Skipper Darren Ladd, in seventh but racing closely in line with sixth placed Da Nang – Viet Nam, notes: “Continuing under white sails, Andy Murden (circumnavigator) recorded a boat speed of 29.95 knots, beating the boat's PB by about 6 knots and leaving the rest of us stunned. We were stunned right up to the point where the anemometer read 50 knots. Time to stick in a reef or three and change to the Yankee 4 (storm stay sail), a sail plan not seen since the Sydney-Hobart.

“All good now, as we barrel along at over 10 knots, the swell given us a helpful nudge towards the end of the Ocean Sprint and the virtual marks beyond.”

Derry~Londonderry~Doire continues to lead, some 75 nautical miles ahead of second place Qingdao and GREAT Britain in third. Despite best efforts by its rivals, Derry~Londonderry~Doire also remains fastest in the Ocean Sprint with its time of 14 hours 18 minutes yet to be beaten. Fourth placed Garmin has come closest so far to beating it, setting 16 hours 49 minutes.

After also reaching high speed surfs yesterday under heavyweight spinnaker, Garmin Skipper Ash Skett now reports: “Today we are back under our storm spinnaker (the Yankee 1) and with winds gusting up to 45 knots the boat speeds are still pretty impressive. The forecast is pretty much the same for the next couple of days at least and it looks like there's going to be a few days of beating into heavy winds, swells and current.”

A rather extreme flying fish encounter was reported on board tenth placed Unicef, battling closely with ninth placed PSP Logistics. Skipper Paul Atwood explaining: “Have you ever wandered peacefully through a meadow, when suddenly the grass erupts in an explosion of grasshoppers jumping in every which direction? Well last night was a marine equivalent, with flying fish going ballistic. By way of the deck light we could see scores and scores of them running off on both sides of the boat. And, not just surface skimming malarkey for these bad boys, some looked to be trying to achieve velocity into orbit as they shot higher than the boom on one side and the tricing lines on the other.”

Further back and Mission Performance is now in eleventh place after over taking Visit Seattle. Still headed north towards the Amianan Island, Skipper Greg Miller and his team are now facing uncomfortable upwind conditions for the first time this race, as he reports: “Now we are back to the uncomfortable and very bumpy type of sailing that is upwind sailing! Angle of heal = HIGH, falling off waves and crashing into the next one = TICK, this is the life we chose for eleven months, some more informed than others, I have no excuses!”

Follow progress on the Race Viewer as the Ocean Sprint continues today and teams battle to make better progress in Race 7, the Da Nang New Discovery of Asia Race.