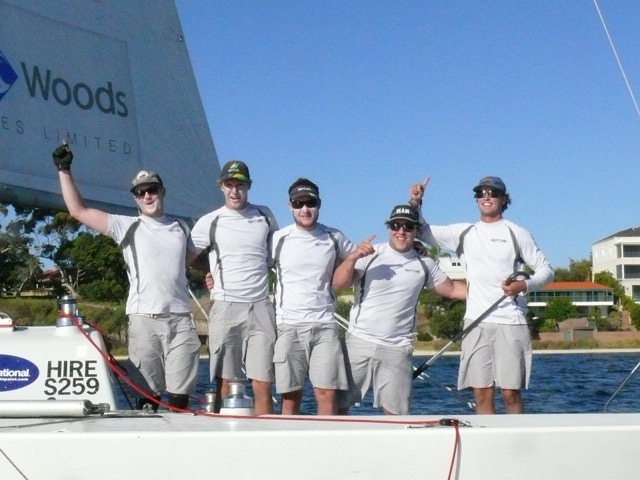 Sam Gilmour, of Royal Freshwater Bay Yacht Club, maintained the momentum that got him to the top of the leaderboard at the end of the round robins, to go on and win the Warren Jones International Regatta.

The final featured the same two skippers as last year, New Zealand’s Chris Steele versus Sam Gilmour, but in this year the tables were turned in the final outcome.

For Gilmour it was a case of mission accomplished, having been the defeated finalist for the previous three years, and the fifth time he has contested the event.

“We’re absolutely ecstatic,” was his comment after the finish, then he complimented his crew member Adam Negri, for whom this was his fifth time in the final, but his first win, “he’s more happy than me.”

The young local skipper had gone two races up in the best of five final series, before his Kiwi rival pulled one back. In the fourth heat of the final Steele was ahead, but pulled off a dodgy gybe and received a red flag penalty, having to take the turns immediately.

That was the deciding moment, and Sam Gilmour cruised to his third win, and collected the trophy.

The top three skippers in this event were awarded places in the World Match Racing Tour event that will take place off Fremantle at the beginning of March.

The third skipper to qualify was Matt Jerwood of South of Perth Yacht Club, who beat Sydneysider Murray Jones in the petit final.

The regatta, is in memory of Warren Jones, who was the mastermind behind Australia II’s historic victory in the America’s Cup way back in 1983, before any of these skippers were born.