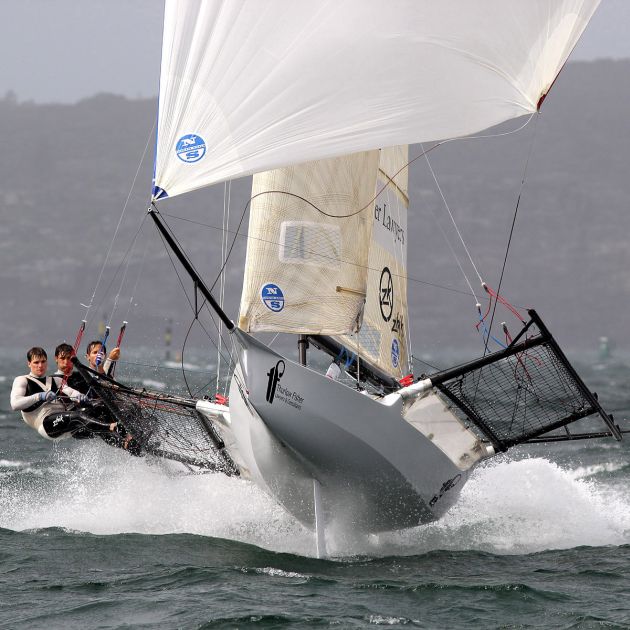 Michael Coxon is a two times winner of the JJ Giltinan 18ft Skiff Championship, a former Australian champion and current NSW champion, and is the skipper of Thurlow Fisher Lawyers in the 2016 JJ Giltinan Championship, sponsored by appliancesonline.com.au, on Sydney Harbour from 13-21 February.

Michael’s new Thurlow Fisher Lawyers-sponsored boat was built just prior to the start of this season and his top rating team is Trent Barnabas, in the bow, and Dave O’Connor on the sheet.

Although the team didn’t win one of the races during the recent nationals, Thurlow Fisher Lawyers finished second behind Smeg, but it seems they may be ‘flying under the radar’ as some followers are talking up the JJ chances of their main rivals.

Underestimating the chances of the Thurlow Fisher team in 2016 would be a great mistake as the crew are proven winners of major championships and know how to time their run into the big regattas.

Coxon’s usual pre-championship preparation is based on meticulous work with his equipment in the local park, then time on the water to fine tune the crew work of the talented trio.

Thurlow Fisher’s forward hand Trent Barnabas is the son of five times JJ Giltinan champion Trevor Barnabas, and is also a multiple winner of the championship. Trent knows that to win a major championship it is not always the ’flashy’ competitor that takes the title, but the consistent team which is still ‘alive’ going into the final race.

Michael Coxon has shown over the years that he has the ability to tread the fine line between driving his boat to the max while still maintaining the consistency which keeps his team ‘alive’ for the entire regatta.

This team is always one to watch and will be there amongst the contenders on the critical final day.