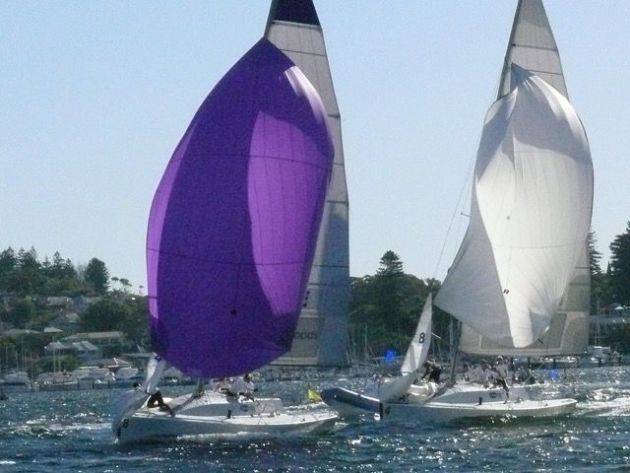 Local skipper Sam Gilmour has come out on top of the ladder after two round robins in the Warren Jones International Youth Regatta. He and his Neptune Racing Team, representing Royal Freshwater Bay Yacht Club ended the qualifying series with 14 wins and 4 losses on the scoreboard.

They are just one point clear of last year’s winner, Chris Steele from the Royal New Zealand Yacht Squadron, who has climbed the leaderboard since languishing down the rankings early in the regatta.

The real conundrum now for the crews and the race organisers is whether there will be enough wind on Friday to run quarter-finals and semi-finals, or whether they will have to go straight to the semis. The forecast is looking doubtful.

If it is only possible to sail semis and the final, then the other two making the cut will be, Matt Jerwood from South of Perth Yacht Club and Murray Jones of Sydney’s Cruising Yacht Club of Australia.

Jerwood and his Redline Racing Team, who led the series at the end of both the first and second days, had a disappointing day, dropping from first to third place.

The big improver on the third day was Lachy Gilmour, younger brother of Sam Gilmour, he climbed from seventh earlier in the week, and just misses out on the top four, so he will be hoping for enough wind to sail the quarter-finals.

One of the big incentives of this regatta is that the top three finishers qualify for the World Match Racing Tour event to be held off Fremantle at the beginning of March. This event will be sailed in foiling catamarans, and will give these young skippers a very valuable entre into the world circuit.

The regatta, is in memory of Warren Jones, who was the mastermind behind Australia II’s historic victory in the America’s Cup way back in 1983, before any of these skippers were born.

The event is organised by Swan River Sailing, and is sailed in their fleet of Foundation 36 yachts, and runs until Friday 5th February.