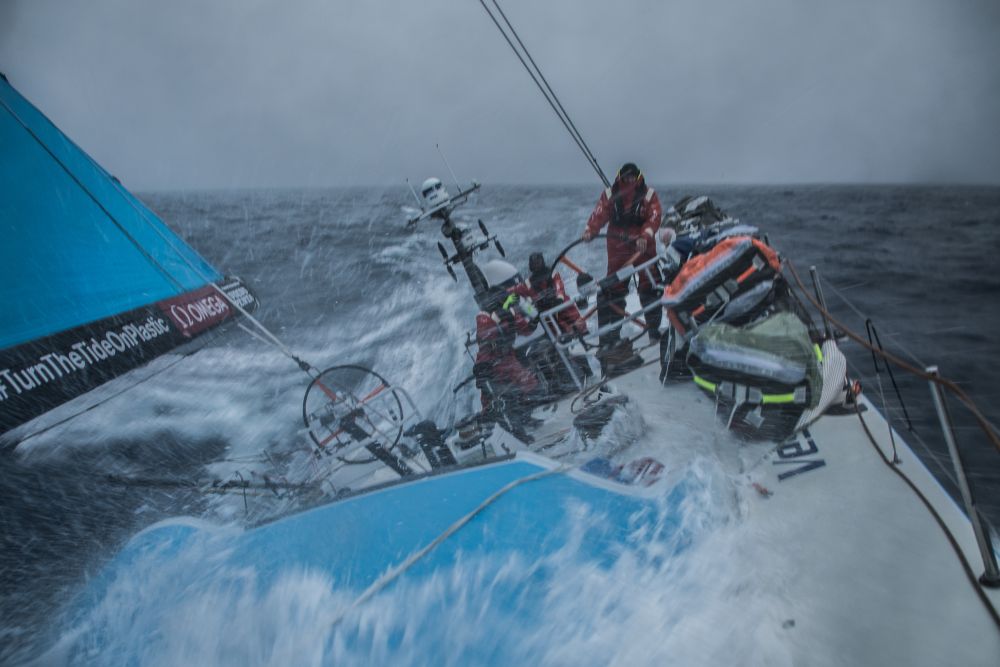 The second leg of the Volvo Ocean Race might be entering its final few days but the final positions are far from decided. MAPFRE continued to lead the seven-strong fleet on Tuesday, but their 35 nautical mile advantage yesterday had been whittled down to 26 miles as the chasing pack close in.

“We’ve managed to get ourselves into the lead, but it’s a pretty tight battle with Vestas 11th Hour Racing, Dongfeng Race Team and Brunel Racing,” said Blair Tuke from on board the leading boat, where Xabi Fernandez's Spanish crew found themselves under attack from a resurgent Dongfeng Race Team, who, after losing the lead and bleeding miles to MAPFRE late last week, have found an extra gear on the approach to Cape Town.

Dongfeng, skippered by Charles Caudrelier, covered an impressive 517 miles in the 24 hours leading up to the 1300 UTC position report enough to move them into second place behind MAPFRE who themselves have made gains on every other team. Less than a mile behind them was Vestas 11th Hour Racing, winners of Leg 1, while Team Brunel were in fourth some eight miles behind Dongfeng.

With just over 1,300 miles still to sail, and a host of tactical opportunities on the horizon, this leg is anything but decided.

Team Brunel emerged from stealth mode at 0700 UTC as the most northerly boat in the leading group of four. Boat captain Abby Ehler revealed yesterday that Brunel navigator Andrew Cape favoured a southerly route before the team disappeared from the rankings but shortly after 2200 UTC they switched tactics and began positioning themselves above their rivals. However their hopes of getting the better of their rivals while in stealth mode were dashed – the move saw them slip from second to fourth in the rankings.

“This part of the leg feels like when you're stuck a chairlift in the rain and you can't get off – cold, wet and no escape! Lucky I love sailing,” Brunel trimmer Kyle Langford tweeted.

Team AkzoNobel, in fifth, were forging a route 70 miles north-west of MAPFRE, while another 70 miles north west sixth-placed Team Sun Hung Kai/Scallywag and Turn the Tide on Plastic in seventh were passing Tristan da Cunha, the most remote inhabited island in the world.

The British colony, which is 1,500 miles from South Africa and 2,000 miles from South America, is home to 262 residents – and famously featured in the 2011-12 Volvo Ocean Race when Ken Read's PUMA Ocean Racing made an unscheduled stop there after dismasting. Read's crew spent several days on Tristan as guests of the island's inhabitants, touring the lobster processing plant, climbing a volcano and playing a round of golf.

The moment wasn't lost on Turn the Tide on Plastic's Henry Bomby, who tweeted: “Just passing Tristan du Cunha, if we stop does anyone fancy a round of golf? Ken Read?”

Meanwhile Turn the Tide on Plastic's navigator Nico Lunven said he was itching to finish Leg 2 as quickly as possible for two reasons: “Firstly, because I am competitive and I want to beat Scallywag, and secondly because I want to get home to meet my new daughter who was born during the leg. At the moment I've only seen a picture of her on email.”

Lunven will have to wait a few more days yet – the fleet is expected to arrive into Cape Town this weekend.