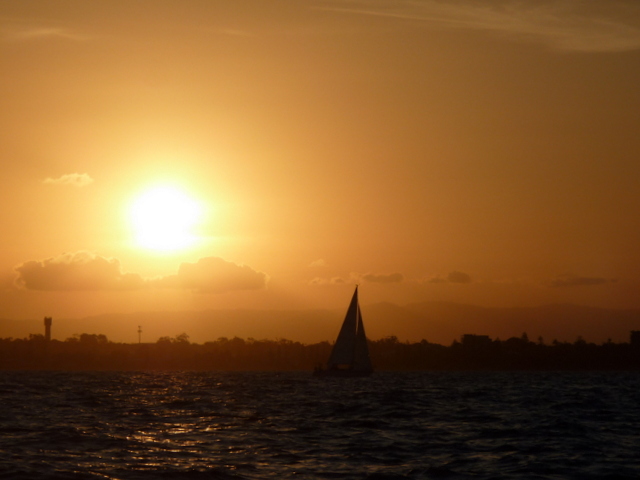 What do the dates 4 November 2017, 2nd December 2017, 3rd February 2018 and 3rd March 2018 mean to you? To the fortunate sailors around Moreton Bay, Queensland, it is this year’s Kingfisher Night Race Series dates.

On Saturday November 4, 28 of the 32 yachts entered, took to the water on a glorious clear night with 10-15knots of breeze for the 3pm start. Racing two-up in one of the smaller yachts entered, a Noelex 30 Calypso, it was great starting in amongst the bigger boats.

It was a low tide start so for the smaller and slower boats that was going to make a big difference in finishing times. The other challenge on these longer races, around 35 nautical miles, is the difference in wind strength and direction over the race. Most managed at least two spinnaker runs but the typical Moreton Bay short chop slowed the smaller, lighter yachts down in the long windward leg up to Pearl Channel where waterline length was a definite advantage: just ask Mike Mollison from SCAMP, a Beneteau First 45, who happily noticed that his boat just moved smoothly through the chop whilst the others around were being thrown up and down!

The fastest boat Kerumba, a Kerr 50, finished in 4 hours 38 minutes, making full use of the incoming tide and wind strength, compared to Manly Unit, a Farr B30, coming in at 9 hours and 53 minutes after having to deal with a turned tide and a lightened breeze!

One of the many memorable things about this series is the range of yachts entered: we had 30 footers to 50 footers, single handed to crews of 11 all starting together and all with a fair chance of taking out one of the prizes; two nights resort hotel accommodation twin share, including transfers, at Kingfisher Bay Resort, Fraser Island.

After another great night sailing I got to thinking – how do these loved race series come to be? I found the man still in charge, Neil Planck, formerly competitively sailing his Farr 1104, Rancha, out of the Wynnum Manly Yacht Club.

Moreton Bay is flanked by numerous sailing clubs and they sometimes put blinkers on and run events for their members only. Back in 1989 a group of competitive sailors, experienced in offshore, night and large fleet racing, pondered why there was not night racing in Moreton Bay and then worked together to put such a series together. The group included Mike Davidson and Dave Kelly, from Royal Queensland Yacht Squadron (RQYS Manly), Herb Prendergast and Scott Murphy from Queensland Cruising Yacht Club (QCYC Cabbage Tree Creek), Neil Planck from Wynnum Manly Yacht Club (WMYC Manly) and John and Debra Caulfield from Moreton Bay Boat Club (MBBC Scarborough).

They sold the idea to each of their respective clubs of a night series that would bring benefits to all those sailors contemplating offshore races, such as the Brisbane to Gladstone, as well as gaining experience in night sailing, marine radio practice (race channel VHF 72 and listening watch VHF 16), dealing with port traffic (listening watch on VHF 12) and working on a watch system.

With the Brisbane to Gladstone race being held each Easter this series was designed to have four races held, to include two races at the end of the season (September to December) and two races in the new year before the start of the season (January to April), and presentation completed before Easter. Races should be held on or close to a full moon night. Ian Davies from RQYS provides the dates well in advance to reduce the likelihood of collaborating clubs organising competing events on those days.

The original course was around 60 nautical miles, starting at the Compass Adjustment Buoy and covering the area within Moreton Bay from E5 near Tangalooma, in the north, to around Peel Island, in the south. With a start of 4pm this meant everyone was night sailing at the end.

There was no cut off time and even though some boats managed to finish by 1am, the slower competitors might end up finishing at 10am the next morning and taking their own finish time. This was great experience but in the end this was a heavy burden for sailors having to get up Monday morning for work or those wanting to do something else with their weekend and see their kids! The current format of the race is around 35 nautical miles with an earlier start of 3pm, which for most of the fleet still sees them into night racing.

The organising committee has reduced over time, as members moved on. Initially John and Debra Caulfield left it to Dave Kelly and Neil Planck and, for the last 20 + years, Neil Planck on his own. In recent years Neil has taken on Lawrie Palmer, a regular crew member on the old Rancha, Bad Habits and SCAMP, to ably assist with all the support IT work, handicap spreadsheet, communications and website (https://sites.google.com/site/kingfishernightraceseries/home).

With such long and stable management of the event, the fleet entrusts Neil Planck with sole decision making and everyone knows his door is open to feedback. His experience goes back to big boat racing in Melbourne, including multiple Melbourne to Devonports, and after launching his own 1104, Rancha, in 1992, having spent three years completing the meticulous fitout himself, a number of Brisbane to Gladstones and regular Kingfisher and Manly Combined Clubs racing. He has always been an event organiser and held Vice Commodore, Commodore and Sailing Chairperson positions with WMYC.

PHS handicaps are developed by Neil based on experience and the boats’ performance history. Winners are heavily penalised, up to 2 minutes, and losers are helped significantly by up to 2 minutes per race. The aim is to run an event with minimal protests, to date no protests have had to be heard. Full observation of the Collision Regulations. Races are cancelled with a gale and higher warnings (winds averaging from 34 knots and up to 60 knots) which lines up with most insurance limits.

The series is set up so that the four clubs involved take responsibility to run each of the races. Race 1 is run by QCYC, race 2 by RQYS, Race 3 MBBC and race 4 WMSC. Each club is responsible for obtaining the race water permit for the day, providing the start and finish boat and managing the radio schedules, which require the competitors to radio in, on VHF Channel 72, on reaching most marks for both practice and safety.

The four courses have changed little over the last few years, with a minor inclusion of the yellow near the Sandhills as a welcome addition.

The marvellous relationship this team built with their naming rights major sponsor, Kingfisher Bay Resort, Fraser Island, (http://www.kingfisherbay.com/) has stood the test of time. Kerry Brough first took on the naming rights back in 1989 and has backed this event every year since. Three sets of two nights resort hotel accommodation twin share, including transfers, at Kingfisher Bay Resort are awarded each presentation night. These are allocated to first on PHS, first on IRC and one as a lucky door prize to anyone in attendance on the night! The other bonus for the fleet is the way this series is managed: monies are all spent on the fleet. As well as the Kingfisher nights as prizes for first on PHS and IRC trophies are awarded to 1st to 3rds for each race and a bottle of rum. The start boats and Lawrie are allocated one bottle of rum each and then the money left over is used to purchase more rum and bottles of wine – all of which is given away as a lucky door prize on the presentation night – so you really have to be there! One special Kingfisher package is also offered as a lucky door prize.

Originally Held at the Norman Hotel, Neil Planck offered the clubs the chance to be involved and run the presentation nights which is now shared around in a north-south cycle. The next presentation night is already booked for the Wynnum Manly Yacht Club. The date is to be announced.

Entry is open to any mono or multihull yacht able to provide the $130 entry fee (or $40 per race), Yachting Australia Membership, completion of the Category 5 2017-21 Special Regulations Equipment Audit Form, and entry form (part of the Notice of Race document) all found on the website (https://sites.google.com/site/kingfishernightraceseries/home).

It is not too late to enter for the one or all of the remaining three night races, with the next one being held on the 2nd December 2017. For information please contact Neil Planck on (neilplanck@gmail.com) and complete your entry form at the end of the Notice of Race found on the website (https://sites.google.com/site/kingfishernightraceseries/home).