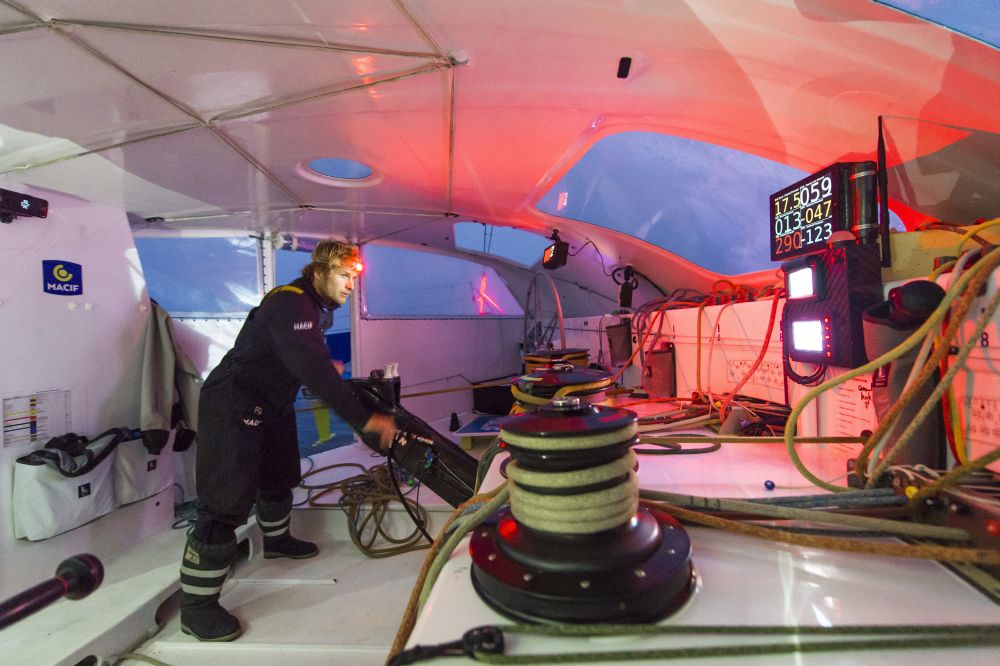 After a little over 17 days at sea, François Gabart is still in the lead by about one-and-a-half days in relation to Thomas Coville’s time, the current holder of the single-handed round the world record. The MACIF skipper hopes to pick up speed again this Tuesday evening, after being forced to sail south to reposition himself in front of a low-pressure area, which slowed him down slightly and meant that he has had to watch out for ice floes. He should round Cape Leeuwin between Thursday and Friday.

Although, after entering the Indian Ocean last Thursday, he had initially planned to position himself behind a low-pressure area and let himself be sucked along by it as far as Australia, François Gabart had to review his strategy at the end of the weekend, as the low-pressure area had not developed in the way he had hoped.

“It was not moving out of the way properly. It was spreading and blocking our passage. So, we chose to reposition ourselves in the south to recover the wind again which is beginning to lift,” said the skipper on Tuesday during a radio session organized at Macif’s headquarters in Niort, which many of the group’s employees attended.

Even though, the MACIF trimaran’s trajectory has been fairly straight up until now, she had to sail south to position herself ahead of a new low-pressure system from the West, which will drive her towards Cape Leeuwin, to the south-west of Australia, in the coming days. She should round the Cape on Thursday evening or Friday morning, and still maintain a lead in relation to Sodebo.

On Monday, she sailed down to a latitude of 54°50, less than 800 miles from Antarctica, where, just one year earlier, Thomas Coville sailed a course on the same longitude, 43° south! “For some time now, it has been quite unusual to take this route in round the worlds, because, as a rule, the ice gates force us to follow more northerly courses”, said François Gabart.

Still located in a very southerly position (53°50) on Tuesday, the MACIF trimaran will sail south of the Kerguelen Islands, before heading a little further up in search of the wind he’s expecting to meet and which was part of his initial strategy. “Icebergs have been detected quite close by, north east of Heard Island (a very small island located 50° south). As a precaution, I am sailing round by the north and the idea is to set a 70-80 course (East North East) in the 24 to 36 hours to come, which will bring us back towards the latitude of the Kerguelen Islands, 48-50° North,” he explains. “We’re going to try and go around to give ourselves a little margin. I hope that I’m not going to stay too long in this area, because it’s a little tricky. It’s nice to come here, but it’s also nice to leave!”

The MACIF trimaran will get moving again, as of Tuesday afternoon, thanks to a new position further north in the Indian Ocean, and will be driven by the low-pressure system behind him. This will mean faster speeds.

“If everything goes well, I will have two or three fairly difficult days ahead that will be potentially very fast,” says François Gabart. “I will have to try and be smart and go fast in the right places to avoid the worst of the swell and the wind, if this low-pressure system should get stronger. The faster I go, the further ahead of the strong winds I will be.”

For these weather conditions, the skipper has taken out his rugby-style costume, together with helmet and protection: “At the moment, I’m constantly wearing knee pads and thigh protection pads, and whenever things get moving, I put on my rugby-style helmet and wear protection on the sides of my chest and on my elbows. The danger when things are moving fast, is when you hit something or when you are thrown around the boat. In this case, prevention is better than cure.”

Just before the radio session organized this Tuesday lunchtime (in France), François Gabart had to solve a problem with the gennaker furling system. This is a part located at the bow, used to secure the bottom of this large foresail.

“On furling the gennaker (to reduce the sail area due to a strengthening wind), the furling system reversed spinning several times round on itself. The result was I could no longer furl the sail, which became awkward, because with the wind due to lift, it would be really dangerous to keep the gennaker up, even more unrolled. So, I succeeded in hauling it in on the trampoline without rolling it. It was a little tricky, and I spent two physically demanding hours dealing with it. I’m glad it is done, because it wasn’t very clever.”

As the wind slackened during the run down south in the Indian Ocean, François Gabart enjoyed relatively calm conditions in which to rest, give the boat a good check-up and enjoy some good food before the strong gale expected on Tuesday evening. “In the last few hours, I have made myself some hot meals. This has done me good because it’s a chilly 4 degrees inside the boat. It looks like it’s going to be a little harder to heat things up with Macif getting faster again, as everything moves in all directions. Burns are one of the first causes of accidents on boats and that’s valid for leisure craft. So, it is going to be fairly rudimentary for a few days, even though I’m going to try and eat as best as possible to stay in good form.” And he will need to be in good form to keep up the pace until Australia…

Follow François Gabart’s record attempt on the MACIF trimaran – on the map: http://bit.ly/MACIF-CARTO-TDM