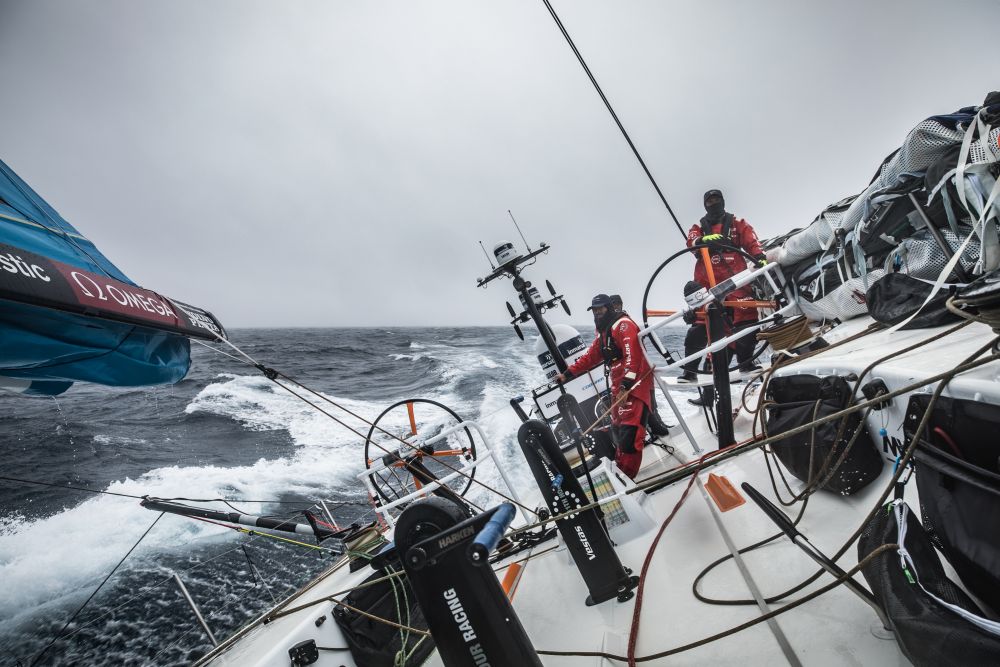 The Spanish crew of Leg 2 leaders MAPFRE were cautiously keeping one eye on their rivals and the other on Cape Town on Wednesday as they came within just over 800 miles of the finish line.

Two days ago Xabi Fernández's outfit had a buffer of 35 miles over their nearest rival after their position as the most southerly boat allowed them to hook into the better breeze of an easterly-moving front first. Forty eight hours on that advantage has been significantly reduced: second-placed Dongfeng Race Team have pushed to within 23 miles of MAPFRE, while Vestas 11th Hour Racing in third and Team Brunel in fourth have also made gains.

In fact, with under 1,000 miles to go to the finish line in Cape Town, just 37 miles split the top four boats.

However the 1300 UTC position report revealed that MAPFRE has started to accelerate again, winning valuable miles back on every other boat in the fleet since 0700 UTC.

Despite this advantage, MAPFRE navigator Joan Vila said the team were very aware of the potential for attack from behind.

“First is a difficult position to defend – we're just trying to do what looks best for us,” he said. “The transition ahead looks good but we're a bit nervous that it could be lighter than predicted. Still, the race is far from over. It looks like the other have all been doing pretty well. Dongfeng, Vestas and Brunel have all had their moments. All these three could be potential threats to our lead.”

Asked whether he feels that MAPFRE can hang on to their lead, Vila was cautiously optimistic. “If all pans out as predicted then probably yes, but weather is not an exact science,” he said. “We'll see how it goes, you never can tell for sure.”

While spirits onboard MAPFRE were high, the opposite could be said for team AkzoNobel. Skipper Simeon Tienpont's crew had hoped that their position equidistant from the leading four in the south and Turn the Tide on Plastic and Team Sun Hung Kai/Scallywag to the north would pay dividends. However they were the team to be spat out the back of the cold front, leaving them languishing in much lighter winds.

At 1300 UTC AkzoNobel found themselves 155 miles behind MAPFRE, having shed 85 miles in the last 24 hours. What's more, a much better night for Sun Hung Kai/Scallywag and Turn the Tide on Plastic has further compounded AkzoNobel's misery. Both teams were able to hold onto the cold front for longer, passing AkzoNobel and relegating them to seventh in the Leg 2 leaderboard in the process.

While bad news for AkzoNobel, the news of the shift in positions was met with cheers on Scallywag.

“The guys did a really good job of hanging on a to big sail last night – we pushed really hard,” a beaming Steve Hayles said. “We made a seven-mile gain on Turn the Tide on Plastic, and managed to stay ahead of the front. AkzoNobel, who are south of us, just slipped off the back. That means they're in a worse wind direction and we made an 18-mile gain on them. They got a bit caught between the north and south groups, and tried to get ahead of the front but it's been a big loss for them.”

The current ETA into Cape Town sees the leading group arriving late on Friday (UTC) assuming the current forecast holds. A more accurate ETA will be available on Thursday.