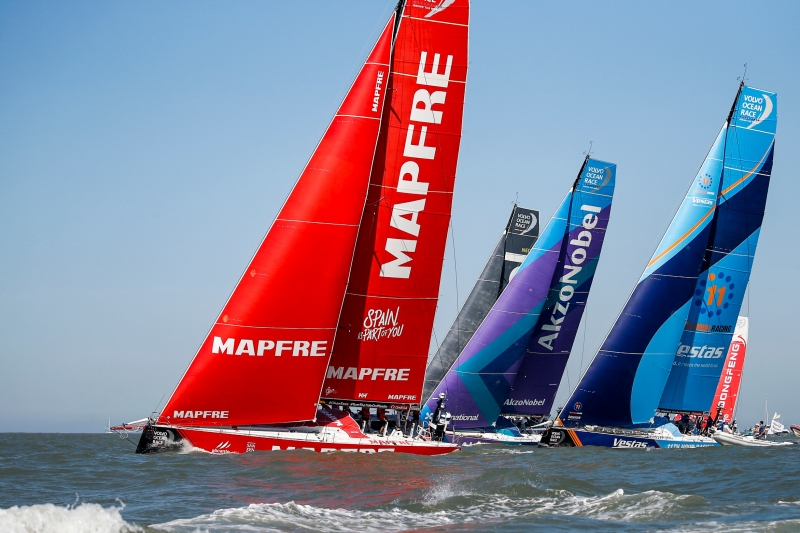 The Spanish team MAPFRE won the Itajaí In-Port Race on Friday in Brazil, after battling with team AkzoNobel for the lead on the first of three laps of the race course.

A large spectator fleet was on hand to watch the racing in a moderate 10 knot sea breeze and after taking the lead on the first downwind leg, MAPFRE protected well the rest of the way.

The win allows skipper Xabi Fernandez and his team to extend their advantage in the In-Port Race Series over Dongfeng Race Team who finished in third place on Friday.

“It was a good race for us today, right from the start, but the key for us was being able to pass AkzoNobel on the first downwind,” Fernandez said. “From there we could stretch.

“Being the series leader is always good. We know how tight the overall race leaderboard is where we’re just one point behind Dongfeng, so this could be important at the end of the race and for that we are happy today.”

Team AkzoNobel was a close second place in Itajaí, which secures their third place position on the series leaderboard.

“When we looked at the conditions and the race course today we knew the start would be critical and we had a very good start with pace,” skipper Simeon Tienpont said. “But MAPFRE did a really good job. We were waiting for them to make a mistake but they did the best race today and we’re very happy with second place.”

Dongfeng Race Team was also content with a podium result.

“We didn’t have a good start but we were able to use the mistakes of the others to get back near the leaders,” skipper Charles Caudrelier said. “We sailed the rest of the race well but there was not so much opportunity.”

Turn the Tide on Plastic scored their best finish of the series with a fourth place result and has moved off the bottom of the series leaderboard.

Team Brunel had a promising start on Friday but was undone by a sail handling error at the top mark, which dropped them from challenging for the lead to battling with Vestas 11th Hour Racing at the back of the fleet.

Team SHK/Scallywag didn’t take the start on Friday, with the boat still out of the water being prepared to take the start of Leg 8 on Sunday. It's a race against the clock to get the boat ready in time.

Earlier, at the skippers’ press conference, Scallywag’s David Witt spoke poignantly about the loss of his friend and teammate John Fisher: “We started together 12 years ago and he was always the first guy picked… the biggest compliment I could give John is that he was the best team player I’ve ever seen. He put everyone else first.

“For me, he was my best mate. Sunday will be a bit weird – it will be the first time I’ve gone to sea without him in 12 years…

“But we’ve had amazing support from within the Volvo Ocean Race family. The character of the people in this race has been exemplified by the way we’ve been supported by the other competitors in this race… I’m sure John would be very proud about that.

“The best thing we can do in John’s memory is get on with the job on Sunday… If he was standing behind be right now he’d be telling me to harden up and get on with it and that’s what we’re going to do on Sunday.”