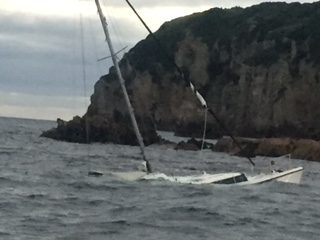 Six people, including two children, paddled to shore in an inflatable dinghy after their catamaran sank off the coast of New Zealand. ​

Police were called at about 5am following reports a 9m catamaran had struck rocks off Mokohinau Islands, 100km northeast of Auckland, and sunk.

“Six people on board managed to get into a tender and make it to shore,” police maritime unit supervisor Sergeant Gary Larsen said.

The catamaran, with four adults and two children on board, was on its way to Great Barrier Island from Whangaparaoa.

“The yacht is now completely underwater with only the mast visible,” Larsen said.

Auckland Rescue Helicopter chief crewman Mark Cannell said they responded to a request for assistance at about 5.20am.

“We were initially advised there were six people in the water, but were updated on route they were all on the rocks near the vessel.”

Their helicopter picked up two children and two adults, while the other two were picked up by Northland Rescue Helicopter. All were taken to Whangarei Hospital.

When their helicopter arrived, the yacht group was a bit shaken and cold.

“It would have been pretty traumatic for them, but they were largely doing pretty well,” Cannell said. “We assessed them as non-injured but a bit cold.”

He was not sure if they were sailing at the time the yacht struck rocks.

“I believe two people were awake when it hit the rocks. They did very well to vacate the boat and get everyone to shore.”

They had used an inflatable dinghy to get from the boat and on to the rocks nearby.

“It appeared to be punctured and taking on water, so they did well.”

They had activated an emergency beacon and had managed to keep their cellphones dry.

“They did a lot of things right,” Cannell said.

The Ports of Auckland pilot vessel Wakatere was also sent to the scene.