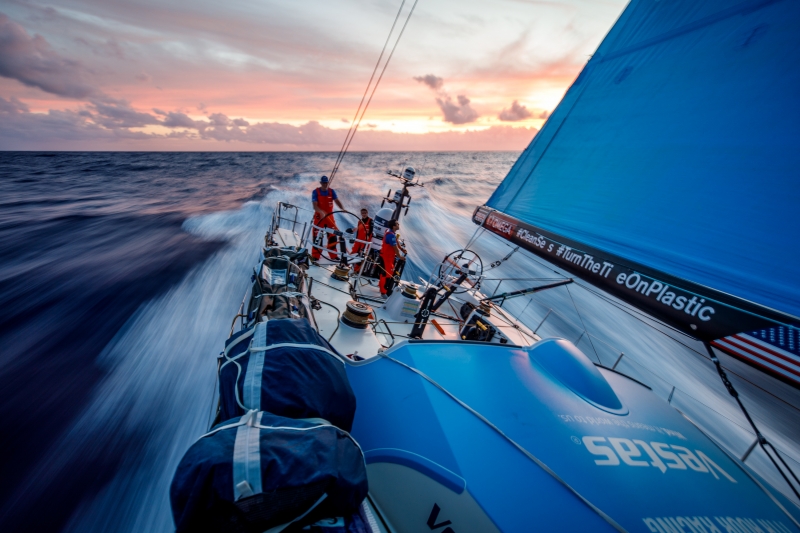 Four days into Leg 4, the Volvo Ocean Race fleet was starting to compress again – with overall race leaders MAPFRE rapidly rising through the rankings and closing in on leaders.

Skipper Xabi Fernandez spoke on Thursday about plenty of opportunities to improve on MAPFRE’s fifth position, nearly 40 nautical miles adrift of the leading duo of Dongfeng Race Team and team AkzoNobel – and by Friday the Spanish crew had rocketed into third.

Having opted to hug the Australian coastline for the first few days of the leg, MAPFRE then went for a change in tactics, and at 1300 UTC were among the most easterly teams in the fleet.

And they had reduced the gap to the leaders to just 5.5 miles, thanks in part to a wider angle that allowed them to put the throttle down and simply sail faster than their rivals.

Vestas 11th Hour Racing and Turn the Tide on Plastic, in fourth and fifth respectively, also clawed back miles on the frontrunners so that less than 23 miles split the top five.

After a gybing battle up the coast of Australia, all seven boats were today punching out into the Coral Sea headed for the Solomon Islands, the first major waypoint on the 6,000-mile leg to Hong Kong.

With a southerly breeze of between 15 and 20 knots sending them on their way, the fleet were in pure speed mode.

“The next 48 hours are going to become a little bit of a drag race,” said Vestas 11th Hour Racing’s Mark Towill, who takes on skipper duties for Leg 4 in place of Charlie Enright. “It’s really important that we keep pushing all the time and make the most of what pressure we have.”

Around 40 miles south west of MAPFRE, Bouwe Bekking’s Team Brunel continued to push hard in sixth place, wary of the requirement to stay in touch with the leading pack until later in the leg when opportunities to make gains will present themselves.

“The fleet will compress as we begin to reach into the waypoint,” navigator Andrew Cape explained.

“The leaders will hit the light air first and we’ll get closer to them but we’re not going to be able to sail round them. It’s after the Solomon Islands on the way to the Philippines that we’ll have to make a choice. And you never know, in the Doldrums near the Equator anything can happen. It will turn into a cloud lottery – some will win, some will lose.”

Meanwhile Dave Witt, skipper of seventh placed Team Sun Hung Kai/Scallywag, said he was looking forward to a chance to rise off the bottom of the rankings.

It wasn’t all doom and gloom on board the Hong Kong-flagged boat though as the team reaped the benefits of fielding an extra crewmember for this leg.

Prior to the start of the Volvo Ocean Race Witt said he was willing to sacrifice man-power for weight, but after three punishing legs he opted to bring in a ninth sailor – and it has made all the difference.

“It’s 100 per cent easier, amazingly better on the people, quicker on the manoeuvres,” Witt said. “I’m quite happy to put my hand up and say I was wrong trying to sail with less numbers. I got that one completely wrong.”