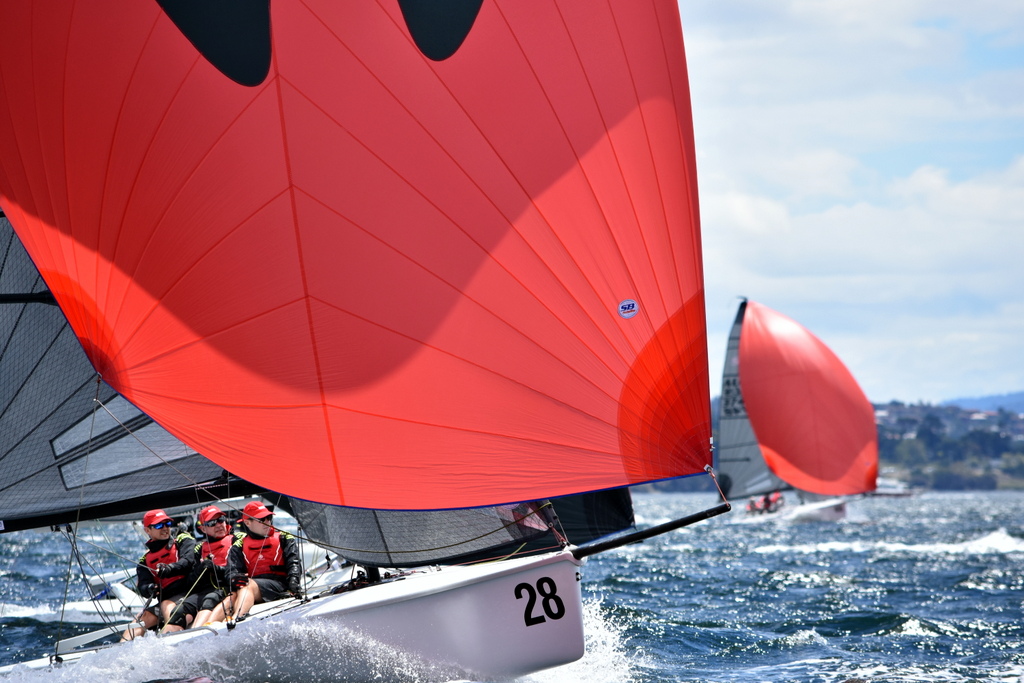 Fleet positions on day two of the pre-Worlds changed dramatically on the surfing downwind spinnaker runs, there were collisions, retirements and pending protests.

“It really is a practice regatta for the Worlds three day away, but it certainly has provided lots of action,” said SB20 Australian class president Steve Catchpool, who was forced out of the racing following a port and starboard collision in race three.

The other boat in the incident Big Ted (Alice Grubb) took an exonerating penalty turn but there are protests being lodged as a result of incidents between other boats.

The north-west to west-nor’westerly breeze averaged 16-18 knots, with sharp gusts as high as 30 knot, causing several retirements from the 33 boat pre-Worlds fleet.

Among them was the French boat EOLIFT Racing which broke a spreader. EOLIFT Racing had been third in overall standings after day one.

The Victorian Ikon20 (Kirwan Robb) broke its rudder in race four while at least two female crews retired from the last race.

Others headed back to the Royal Yacht Club of Tasmania and Derwent Sailing Squadron marinas to save damage in the gusty conditions with the 2018 SB20 Worlds only three days away.

Racing yesterday began with a general recall for race three of the series and produced two different race winners.

After four races of the SB20 pre-Worlds Give Me 5 (Robin Follin, Fra) looks virtually unbeatable, last evening being overall leader on 8 points (1-1-2-4) with Export Roo (Michael Cooper, AUS) moving up to second place with 24 points (12-4-7-1).