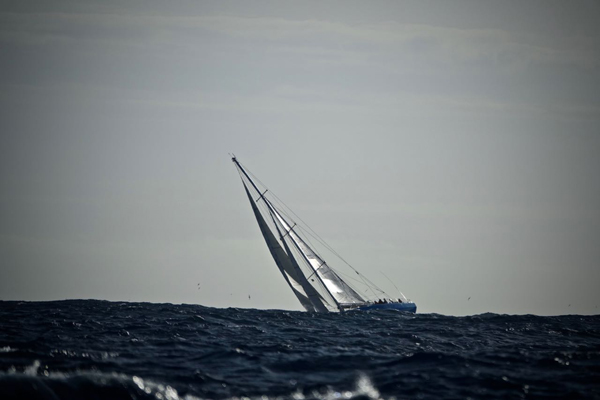 After a testing first 24 hours beating upwind in Leg 6: the Wondrous Whitsundays Race, the Clipper Race fleet remains close together with just over one nautical mile (nm) being the difference between the first four boats on the leaderboard and less than 30nm separating all 11 teams.

Australian skipper of Sanya Serenity Coast, Wendy Tuck, is marginally in the lead at the moment and reports that: “It’s been a tough first 24 hours of bashing away into headwinds – a little bit what a Sydney Hobart race is normally like.”

However, it is the upcoming tactical decisions that play on Wendy’s mind today. She explains: “There are still tactical decisions to be made regarding the weather and do you run for the Scoring Gate or not. It is quite a way off the rhumbline – basically that’s the shortest line to your destination.”

Close behind in second place is PSP Logistics and skipper Matt Mitchell is preparing for a change in the wind conditions: “We are expecting the onset of a front this evening which will bring relatively strong headwinds so we have just been setting the boat up for that. Once the front passes it should drag the wind around behind us for a while which will give us a nice reprieve from the tippiness of the last day or so.”

The only team to play its Joker Card on this race is Garmin and skipper Gaëtan Thomas completes the podium positions currently explaining that: “We are in close contact with Sanya Serenity Coast for a while and PSP Logistics, Visit Seattle, Dare To Lead and Liverpool 2018 are not far either.”

Dare To Lead, currently in fourth, is further inshore and closer to the rhumbline with skipper Dale Smyth explaining that the crew are struggling a bit with the conditions: “The last 24 hours has been pretty brutal to say the least. Hard upwind conditions with everyone feeling pretty seasick. It is muggy and hot below decks and wet above deck, so no respite. Spare a thought for us as you go about your comfortable days.”

Liverpool 2018 and Visit Seattle make up fifth and sixth position and both skippers are also reporting a bit of seasickness amongst their crew, which tends to set happen in the initial stages of an upwind race.

Liverpool 2018 skipper, Lance Shepherd says: “Life on board our little pink boat has been very bouncy but the team is making the most of it as we head up the Tasmanian coast. Of course, the usual struggles have come about with re-learning how to walk on your side and how to hold the green monster at bay but so far so good.”

A close battle is developing between Qingdao and HotelPlanner.com in seventh and eighth, with the latter’s skipper, Conall Morrison, reporting: “We are finding ourselves match racing Qingdao these past twelve hours and have been tweaking the sail trim or shaking out a reef as we watch the distance between us increase or decrease, or their speed change on AIS.”

Furthest west, in ninth place, is Nasdaq and its crew has been busy with evolutions under the command of skipper Rob Graham: “After more tacks than anyone on board Nasdaq cared to count, we left the River Derwent and Storm Bay yesterday evening and have since been beating up the Tasman Sea.

“Gradually reducing our sail plan as the wind has built, through reefs and headsail changes – the evolutions have all gone smoothly: the Nasdaq crew have learned so much and are working very well as a team and in their watches, and we haven't had too many appearances from the big green monster either.”

Making up the rest of the fleet is GREAT Britain in tenth and Unicef in 11th, but the latter’s skipper, Bob Beggs, remains optimistic: “Tactically we have our work cut out. Being at the back means room for improvement! So, we will be looking forward to lighter wind up ahead to slow the front runners and hopefully compress the fleet.”

With the fleet anticipating a change in conditions, Clipper Race Meteorologist Simon Rowell explains that: “The weather is quite messy for the next couple of days. This front looks like it will stick at the north end of Bass Strait, turning into an almost stationary trough.”

Leg 6 will finish in Abell Point Marina, Airlie Beach and the fleet is expected to arrive between 13 – 15 January ahead of the inaugural Whitsundays Clipper Race Carnival.