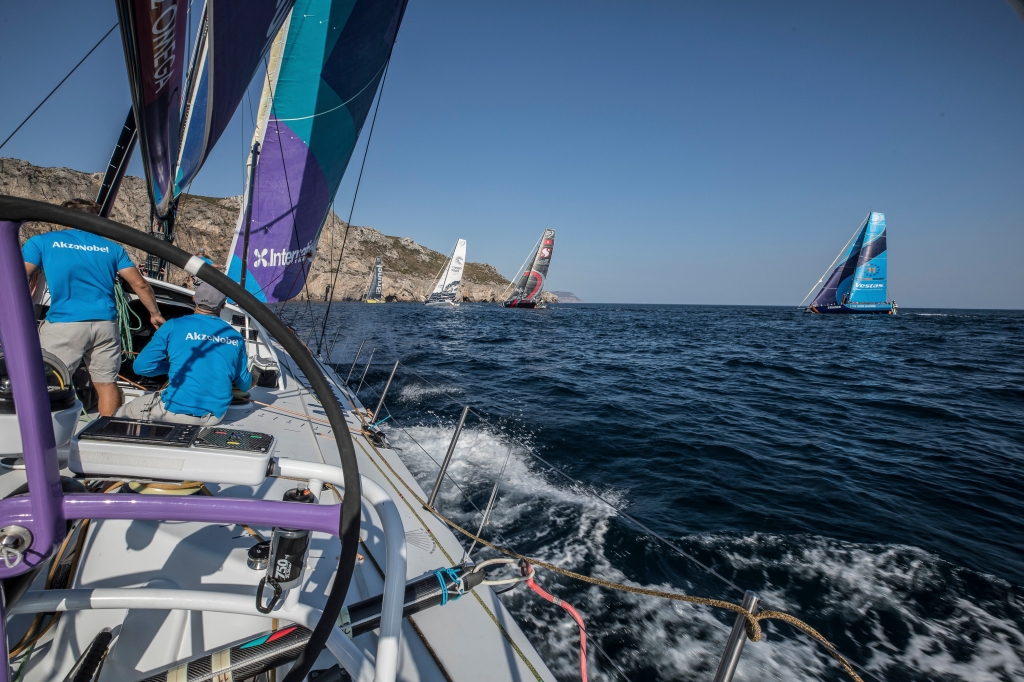 The Prologue Leg of the Volvo Ocean Race began on Sunday afternoon, after the start was delayed by just over 2 hours and moved nearly 20 miles south in order to find better racing conditions.

The Prologue is a non-scoring race to deliver the seven-boat fleet from The Boatyard in Lisbon, Portugal to the home start port of the Volvo Ocean Race in Alicante, Spain ahead of the race start on 22 October.

At the scheduled start time of 1400 local time in Lisbon on Sunday afternoon (1300 UTC), the sea was like glass with extremely light and variable winds.

Race Director Phil Lawrence and his team asked the crews to proceed due south, under power, towards Gibraltar, and two-hours later the fleet was rewarded with a light, but steady 7 to 10 knot northwesterly breeze, allowing racing to start at 1515 UTC.

Xabi Fernández and his MAPFRE team led the fleet off the starting line, racing downwind in a drag race to get south.

“This prologue is a great opportunity as a warm-up because then we go straight into the coastal race and the first leg. We are really looking forward to it, and are all very motivated,” said Pablo Arrarte, watch captain on MAPFRE, as the team left the dock.

In contrast, Dongfeng Race Team was shut out from the starting line at the committee boat end and trailed the fleet across the line.

Thirty minutes after the start, there was an east / west split emerging, with Team Brunel furthest east and slightly behind the leaders, and Vestas 11th Hour Racing furthest west and nominally in the lead.

“It feels different when it’s game day,” said Charlie Enright, skipper of Vestas 11th Hour Racing. “For this Prologue, it’s all about learning. We’re interested to see where we stand against these guys. We’ve done some two boat testing and it’ll be interesting to see how fast we’ve gotten because the fastest boat is going to win this race.”

According to our @RaceExperts, the forecast is for light conditions to Gibraltar, where the teams will encounter moderate to strong easterlies in the Strait, followed by lighter conditions again once the fleet transitions into the Mediterranean Sea.

The Volvo Ocean Race will start from Alicante, Spain on 22 October. The Alicante Race Village is scheduled to open at 1800 local time on Wednesday afternoon, with the In-Port Race on Saturday 14 October.