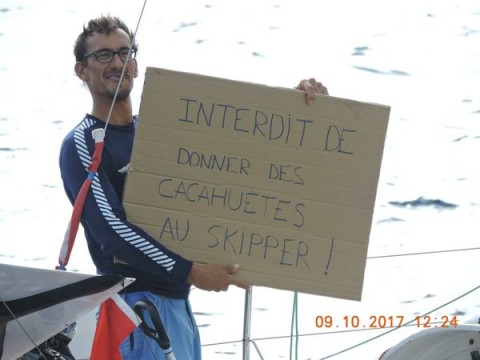 Translation: Do not feed peanuts to the skipper.

As the sea takes on the look of a millpond, the skippers competing in the Mini-Transat La Boulangère are getting increasingly worried. Between the latitude of Madeira and that of the Canaries, the wind is dying and the average speeds make for depressing reading. At this pace, there is no real prospect of a solid ETA. Both at sea and on shore, everyone will just have to grin and bear it for now.

This first leg of the Mini-Transat La Boulangère may go down in the race’s history books as one of the longest of the modern era, when the competitive prototypes and production boats took over from the Muscadets and Serpentaires of the early days. In this windless stagnation, everyone is trying to find a saviour in options that are increasingly uncertain. Indeed, the only certainty is that the situation is benefiting those towards the back of the fleet due to misfortune or dawdling.

La Fontaine may not have envisaged the flip side of the tale of the tortoise and the hare, whereas Jérôme Lhermitte (Noveum), Guillermo Canardo (Open Arms) and Thomas Béchaux (Poralu Marine) are embracing it with open arms. Indeed, they’ve been able to continue making steady progress, whilst also closing on the leaders slightly. Other have not been so lucky alas.

Indeed, between the tail of the fleet and a little group just to the north of the latitude of Madeira, the wind has faded away to the great displeasure of Vianney Desvignes (Effydin – Stade Français), François Denis (Soboat.com) and Boris Pelsy (Novintiss). We can but imagine the fruity conversations over VHF…

A game of chance on the open ocean

Within this context, some skippers have opted to leave things to fate, entrusting the wind gods with the keys to the boat should they dare to put in an appearance. Between Irish sailor Thomas Dolan (Offshoresailing.com), Pierre Chedeville (Blue Orange Games – Fair Retail) and Yann Burkhalter (Kalaona) sleep is a hot topic of conversation. To hear them it sounds like a pyjama party is in store this evening, with a deep sleep under the quilt before breakfast on the terrace at sunrise. Essentially, nobody really knows which way to turn given how stretched the isobars have become and how scrawny the pressure gradient is.

At the mercy of each new position report, those favouring one option take precedence over others and vice versa. Yannick Le Clech (Dragobert), one of the skippers furthest over to the west, had gained the upper hand in the 15:00 UTC ranking, whilst Clarisse Crémer (TBS), one of the skippers further to the east appeared to be leading the race at the previous position report. It must be tempting to offer Neptune some sacrifices, though this may not be wise given that there’s not much left to eat aboard…

In the prototype category, Arthur Léopold-Léger (Antal-XPO) has clearly decided not to give an inch. Despite the fact that the two leaders have covered just 50 miles in the past 24 hours, he’ll be keen to instil some doubt in the direction of Ian Lipinski (Griffon.fr), for whom this would be his first defeat in two years of racing. However things pan out, there is an Atlantic left to traverse of course.

One imperative, to drink

This is the key to lucid sailing. As such, the rule for the Mini-Transat La Boulangère dictates that a minimum of 40 litres of water is aboard. This is easily the equivalent of 10 to 12 days of racing. However, we are well aware of the sins of offshore racers. Indeed, it’s highly likely that a few of the hotheads emptied a few bottles of water into the sea the minute La Rochelle’s towers had disappeared over the horizon in a bid to make the boat lighter. For those who do end up short of water, a nine-litre jerrican of water must make up some of the contents of the grab bag, whose seal will have to be broken if used and the verdict will automatically go before the jury. As such, between losing a few hours from their final race time or putting their health at risk, the skippers will have to quickly make their choices.