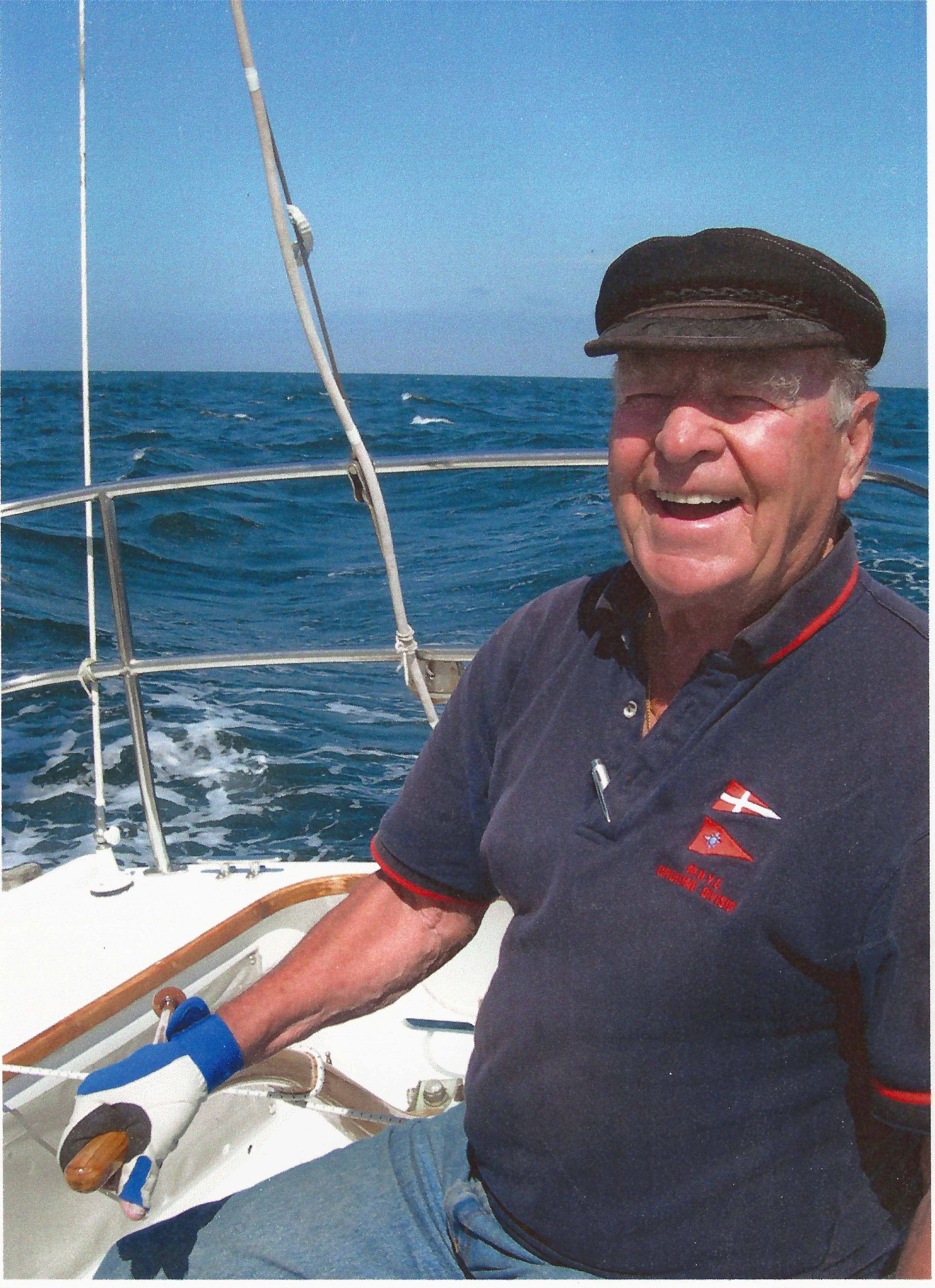 Tig Thomas was something of an institution in offshore racing and at MHYC.

Tig started sailing in Wagga Wagga, where he was born, in Heavyweight Sharpies in 1949 and then Gwen 12s. He later became Commodore of the Wagga Wagga Boat Club.

In 1971 the idea of hitting the ‘big-time’ got to him. With the financial support of a favourite client and friend, Max Bowen, Tig had Bob Miller (later known as Ben Lexcen) design a half-tonner, ‘Plum Crazy’, which was to become a famous name in local and offshore racing.

Built by Australian Doug Brooker and launched in December 1971, it was just in time (10 days to spare) to compete in the 1971 Sydney Hobart Yacht Race. The crew comprised Tig and his brother Ted, Doug Brooker as navigator, Rolly Bull and Richard Hart.

Tig said at the time, “The greatest buzz was for the smallest yacht in the fleet to be still leading the fleet of 79 yachts up the Harbour in this little 30-footer, ‘Plum Crazy’ (named for its purple colour), for the first 20 minutes before the maxis could catch us. (See photo attached of Kialoa II crossing Plum Crazy’s stem on her way up the Harbour).

“We managed to win Division 2B and finish 6th overall in our first race in ‘Plum’!”

He  skippered the first of the Half Tonners to finish, winning Division 2B, but was placed 70th overall in the year that ‘Kialoa III’ set the race record that stood for an unprecedented 21 years.

Plum Crazy’s own elapsed time that year of 4 days 01 hours 18 minutes and 16 seconds, a record for a yacht under 9.5m LOA – and it still stood in 2008. Tig and Max later presented a half model of the little boat to the CYCA, as the ‘Plum Crazy Trophy’ for the first yacht under 9.5m LOA to finish the Sydney Hobart.

Tig sold ‘Plum Crazy’ in 1988 and bought, sailed and sold various other yachts, but he still had a love affair for the beautiful ‘Plum Crazy’ and bought her back in 2005.

Tig was elected Commodore of MHYC twice; from 1976–1979 and 1995–1997. He was nominated as a Life Member and recently received his fifty-year pin at the Seniors Lunch.

From 1976-79 the Club needed to find extra revenue, and during that period, the membership was increased from 700 to 2,689. There were around 400 yachts on the register and 200+ raced regularly in a number of divisions (inshore and offshore).

For the other 200, he helped re-established The Cruising Division, which has been an integral part of our activities ever since.

In his second term from 1995 to 1997, Tig’s biggest challenge was to keep the Club from being closed down. He introduced a ‘Commodore's Table’, inviting a small group of members from various sections of the Club to join him for dinner each week to “get to know” the committee members and each other. This helped restore a happier club membership. He also went on to preserve the Club’s history in producing the book ‘Middle Harbour Yacht Club: The First Sixty Years’.

Besides his love of sailing, Tig was an accomplished guitarist and also pilot. For his 90th birthday in 2016, he was given a skydiving experience. (www.youtube.com/watch?v=gU-CbF6kJ4g ). After that, all he could say was “Bloody Marvellous.”

He was a kind and generous man who lived life to the fullest. We will all miss him greatly.