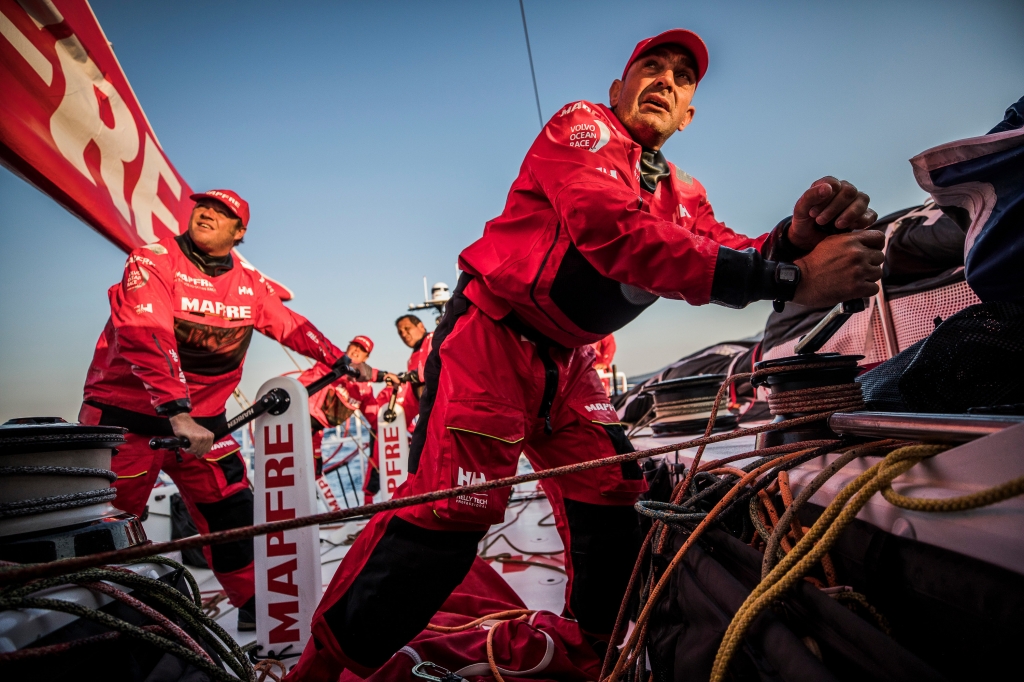 Skipper Xabi Fernández's MAPFRE crew is leading the charge into the Mediterranean Sea on Tuesday afternoon.

The Spanish team made a jump on the rest of the fleet by heading further inshore in search of favourable sea breezes following Sunday's start, with Team Brunel benefiting from following a similar track.

Forty-eight hours later, their tactics have paid huge dividends. At the 1300 UTC position update on Tuesday, MAPFRE enjoyed a seven nautical mile lead on Team Brunel, who were themselves almost 40 miles ahead of third-placed Turn the Tide on Plastic.

Dee Caffari’s team went from zeroes to heroes overnight Monday, in large part by making a late break to the coast earlier in the day. Although too late to catch MAPFRE and Team Brunel, they sailed past the four boats parked further offshore.

“We’re finally moving and I’m very excited,” Caffari posted on Monday afternoon. “It was quite painful, but now the sea breeze has filled in… the others are ahead and offshore and they’re not going very fast, so we’re hoping that we can (get past).”

By morning, the Turn the Tide on Plastic crew had squeezed past, vaulting from trailing the fleet to a relatively comfortable third place position.

While MAPFRE march on upwind towards the Alicante finish line just over 250nm away, Team Brunel continue to shadow them ten miles to the south.

Meanwhile things are about to heat up for the chasing pack as they prepare to enter the Strait of Gibraltar. The tiny nine-mile wide stretch between Tarifa on the southern tip of Spain and Morocco in northern Africa is renowned as a navigational challenge thanks to the extremely localised weather caused by the wind and water being forced through such a small gap.

On top of that it's among the world's busiest waterways, with countless ships, fishing boats and pleasure craft to dodge.

According to the Volvo Ocean Race's team of Race Experts, the four teams about to enter the gateway to the Mediterranean – Dongfeng Race Team, team Akzonobel, Vestas 11th Hour Racing and Team Sun Hung Kai/Scallywag – can expect the breeze to jump from 10 knots to gusts near 30 knots.

Dongfeng Race Team's Daryl Wislang, a four-time veteran of the Volvo Ocean Race, knows all too well what lies ahead.

“We're enjoying the calm before the storm… the storm of Gibraltar,” he said.

As if the Strait of Gibraltar wasn't narrow enough, a Traffic Separation Scheme (TSS) implemented by race control to keep the fleet out of the major shipping lanes only makes the job of getting through harder.

“Things are starting to ramp up a bit now – lots of manoevres, lots of tacking as we try to position ourselves in this group of four boats,” said Steve Hayles, Team Sun Hung Kai/Scallywag's navigator.

“It's a very complex part of the race, but an interesting one. We will have to deal with the Strait of Gibraltar in the first leg of the race (in the opposite direction) so it's a key thing.”

The entire fleet will have made it into the Mediterranean by nightfall on Tuesday, but the Prologue is by no means over yet.

The strong headwinds the fleet experience in the Strait will give way to light 5 to 10 knot northeasterlies in the Alboran Sea on Tuesday night and into Wednesday morning.

This will push the ETA for the leaders into the early hours on Thursday morning, with the rest of the fleet arriving throughout the day, a public holiday in Alicante.

On Wednesday afternoon, the gates to the Alicante Race Village are scheduled to open at 18:00, with festivities and entertainment marking the opening ceremonies from 20:00, culminating with fireworks at 22:00.