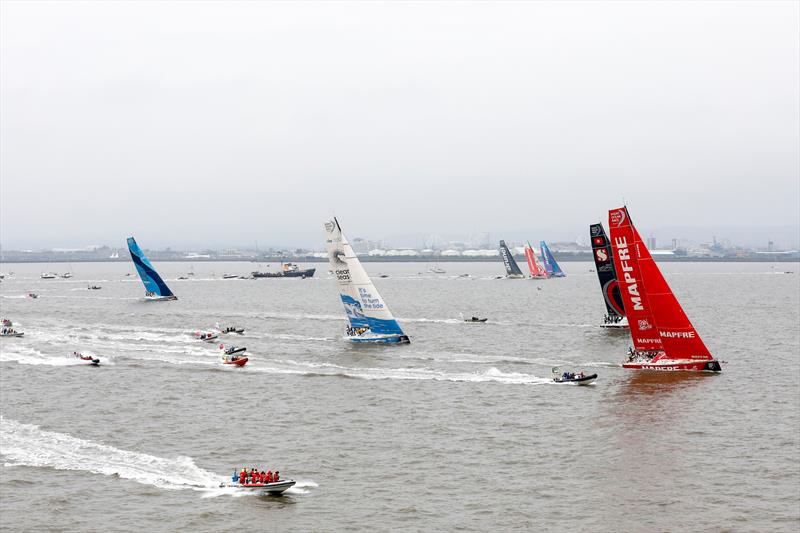 With just two legs remaining in the Volvo Ocean Race the battle for the overall prize is tighter than ever, with three teams fighting for first place and a fourth crew still in with a shot at the podium.

As the teams prepare for the Sunday afternoon start of Leg 10 sprint from Cardiff, Wales to Gothenburg, Sweden, Charles Caudrelier’s Donbgfeng Race Team has the advantage, sitting in pole position.

The Chinese-flagged team holds a one point lead over Xabi Fernández’s MAPFRE, who had been leading for the majority of the race.

And just two points further back is the hottest team in the race, Bouwe Bekking’s Team Brunel.

To put in context how dominant Bekking’s team has been over the past three legs, consider Brunel has scored 37 of the maximum 38 points available, compared to Dongfeng with 26 points and MAPFRE who have collected 20 points over that span.

“All the pressure is on these guys, they’re still ahead of us,” Bekking insisted at Friday’s press conference. “We just have to beat them, like I said in Newport. Just beat the two red boats and then we’ll see what happens on the last leg. I think it will all come down to the last leg into The Hague.”

As much as he’ll be fighting for the prize, Bekking will need to keep one eye on his Dutch compatriots on team AkzoNobel, who could challenge for the podium with two strong results on the finishing legs.

For the leader, Charles Caudrelier, the emergence of Brunel as a threat has changed the way his team will approach Leg 10.

“Earlier in the race, maybe we played too much in match racing with MAPFRE,” Caudrelier conceded. “Now there is another boat in the game. We just have to go race and see what happens. Maybe after his leg we’ll have to think about controlling someone but right now, the lead is too small for that.”

Leg 10 is a 1,300-nautical mile sprint that takes the teams around the west coast of Ireland up to the northern tip of Scotland before heading east-southeast to Gothenburg, the home of Volvo.