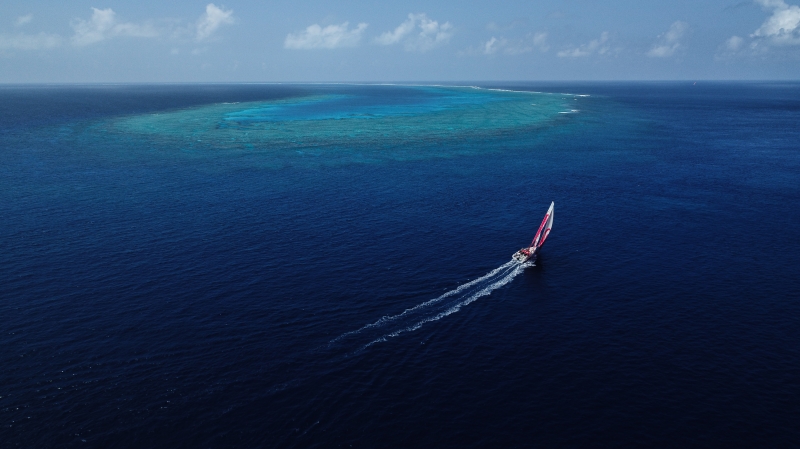 Skipper Simeon Tienpont’s team made the most of slightly better wind and angle as they sailed round the outside of previous frontrunners Turn the Tide on Plastic along with Team Sun Hung Kai/Scallywag.

A little bit of luck then came AkzoNobel’s way when a tropical cloud appeared in between her and closest chasers, Scallywag, scuppering her rival team’s speed while she slipped away at pace.
The three teams had been neck and neck approaching the northern tip of New Caledonia, with AkzoNobel and Scallywag lined up to the west of Turn the Tide on Plastic.

Dee Caffari’s Turn the Tide team gambled on sailing between New Caledonia’s barrier reef in a bid to gain precious miles but as Leg 6 entered its 17th day it was clear the punt had not paid.

At 1300 UTC AkzoNobel had accelerated to 25 miles in front of Scallywag, while Turn the Tide on Plastic was 65 miles north-east, but another 1,000 miles of race course still lie between them and the Auckland finish line.

“Of all the six boats in the fleet I would rather be on this one right now,” AkzoNobel’s Cecile Laguette said.

“We are in a good spot, looking at where the breeze is coming from right now and where we need to be positioned in the next few days. But there is still a long way to go and until we get to the northern tip of New Zealand with a good lead then we probably shouldn't talk about anything.”

Leg 4 winner, Scallywag, has been working overtime to regain ground on AkzoNobel since losing the Leg 6 lead a few days ago.

Just when they thought they had reeled their rivals, disaster struck in the form of a cloud that reduced their speed to less than a knot.

AkzoNobel, still travelling at 13 knots, made her escape once more.

John Fisher, helmsman on Scallywag, said: “It was the middle of the night and we were heading round the reef at the top end of New Caledonia. We were only two or three miles from Akzo when a cloud came right between us. It was one of those very frustrating hour-long stints when you just want to pull your hair out. We’re just heading south as quickly as we can go.”

Team Brunel was in fourth place on the Leg 6 leaderboard before opting to go into stealth mode, whereby their position is hidden from the race tracker for 24 hours.

Stealth mode is most commonly deployed when the teams want to attempt a big tactical manoeuvre – but the teams and fans alike will have to wait until they reappear with on Saturday’s 0100 UTC position report to find out if it has paid off.

After passing the top of New Caledonia and breaking free from the Doldrums, back markers MAPFRE and Dongfeng have adopted a slightly higher angle as they try to maximise boat speed and claw back miles on the front four.

“We are starting to get out of the Doldrums and the conditions are starting to be close to the south easterly winds, though the trade winds aren’t established 100 per cent yet,” MAPFRE navigator Juan Vila said.

“We have periods of ten knots of winds alternating with slightly lighter winds of five to six knots. We hope it will be more established in the next hours and tomorrow we will already have wind around 10-15 knots.”